Juventus will hope to continue their unbeaten start to the Serie A season when they take on Genoa at the Luigi Ferraris Stadium on Sunday.

The curtains will fall on Matchday 11 of the 2020/21 Serie A on Sunday, with as many as six games on show. Defending champions Juventus will be in action on the day as well, as they pay Genoa a visit at the Luigi Ferraris Stadium, looking to continue their fine recent winning run.

Genoa have struggled to kick on in the first few months of the 2020/21 season so far, managing to win just one of their 10 Serie A games till date. That sole victory came way back in September, which means the Grifone have now gone nearly three months without a league win. This run of results has left Rolando Maran’s men three points adrift of safety.

Juventus, on the other hand, have blown hot and cold in the defence of their Serie A crown. In what is their first season under Andrea Pirlo, the Bianconeri have hardly looked convincing, even though they are one of only two Serie A teams yet to face a league defeat. The visitors, though, come into this game buoyed by a UEFA Champions League group clinching win over Barcelona.

The corresponding fixture last season ended in a comfortable 3-1 win for Juventus, with Paulo Dybala, Cristiano Ronaldo and Douglas Costa on target, while Andrea Pinamonti scored the late consolation goal for Genoa. Ahead of the latest meeting between the two sides, The Hard Tackle takes a closer look at the encounter.

Mattia Perin should be fit enough to take on parent club Juventus on Sunday. (Photo by AFP/Getty Images)

Rolando Maran is already under the pump due to his side’s travails so far in the 2020/21 Serie A campaign. The Genoa manager’s job does not get any easier while managing his squad amid a spate of injury woes ahead of the visit of champions Juventus.

On Sunday, the hosts will be without as many as six first-team players, although Maran is greeting the return of one first-team player in the matchday squad in Juventus loanee Mattia Perin. Those who do miss out for Genoa are Federico Marchetti, Davide Biraschi, Davide Zappacosta, Cristian Zapata, captain Domenico Criscito and Francesco Cassata.

The returning Perin should be back in the starting lineup straightaway against parent club Juventus with Genoa set to line up in a 3-5-2 formation on Sunday. The raft of injuries in defence means that Mattia Bani, Edoardo Goldaniga and Andrea Masiello pick themselves in the back three.

In the injured Zappacosta’s stead, Paolo Ghiglione is a certainty at right wing-back, with Luca Pellegrini taking his place on the opposite flank in the absence of Criscito. As for the three-man midfield, Milan Badelj struggled with some fatigue in his thigh but should be ready for Juventus. The 31-year-old will be joined by Stefano Sturaro and Lukas Lerager in the middle of the park.

Finally, in attack, the onus will be on Gianluca Scamacca and Eldor Shomurodov to pounce on every little chance that they find coming their way against a Juventus defence that will surely cut the gaps smartly for the most part on Sunday. 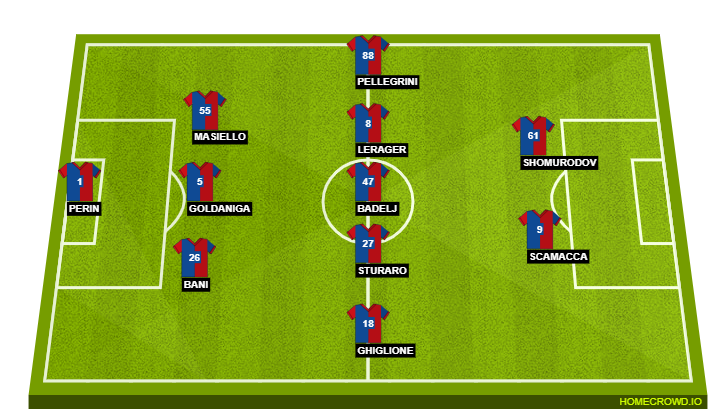 Unlike his counterpart in the Genoa dugout, Andrea Pirlo has very few roster issues to contend with ahead of his side’s latest fixture. On Sunday, the Juventus manager will be bereft of the services of just three first-team players.

Third-choice goalkeeper Carlo Pinsoglio is suspended after receiving a red card while celebrating the late winner against Torino last week. The other two absentees are Giorgio Chiellini and Merih Demiral, who are both recovering from their respective thigh injuries.

However, in some good news, Alvaro Morata is eligible to play after he won an appeal against his ban for verbally abusing a match official. Veteran goalkeeper Gianluigi Buffon is also available and a part of the Juventus travelling squad for the Genoa game after shrugging off a minor issue.

Buffon, though, should make way for Wojciech Szczesny in goal, with Juventus likely to revert to the 4-4-2 formation after lining up in a 3-5-2 setup earlier this week against Barcelona. Juan Cuadrado and Alex Sandro ought to be the two full-backs, with Matthijs de Ligt and Leonardo Bonucci forming the central defensive partnership.

Up ahead in midfield, Rodrigo Bentancur should return and will shore up the defensive side of things in front of the back four. West McKennie, though, should be rewarded for a job well done earlier this week with a spot in the middle of the park.

Dejan Kulusevski and Federico Chiesa are likely to be the two wide men for Juventus, with the duo having the impetus on them to provide the forward thrust from the flanks. Finally, Cristiano Ronaldo and Alvaro Morata will form the strike partnership against Genoa, with Paulo Dybala missing out. 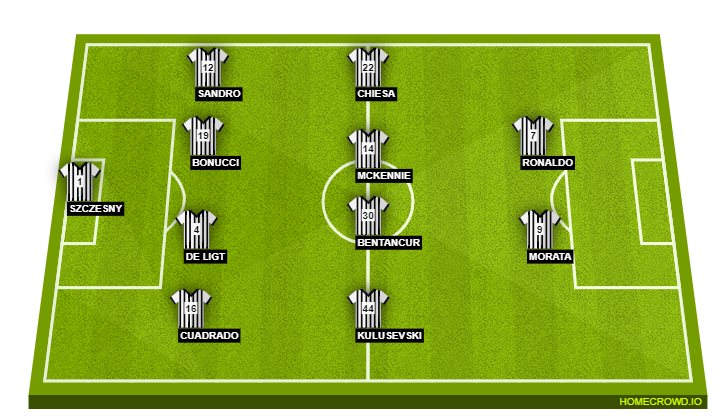 In what has been a brilliant 2020/21 campaign, Alvaro Morata has been one of the revelations in Andrea Pirlo’s Juventus. Embracing more and more responsibility, the Spaniard has been able to do much more than his primary task of scoring goals, developing qualities that made Karim Benzema the perfect foil for Cristiano Ronaldo at Real Madrid.

That is precisely the reason why Morata currently finds himself ahead of Paulo Dybala in the attacking pecking order. The 28-year-old will now be keen to find the back of the net himself, with a struggling Genoa side providing him with the perfect opportunity to do so. A big game awaits Morata.

This game can realistically only go one way. Genoa are a mess right now and Rolando Maran is unable to turn things around as things stand. Juventus, on the other hand, will be riding a wave of confidence following their big win over Barcelona earlier this week.

With Cristiano Ronaldo and Alvaro Morata firing on all cylinders, it is nigh on impossible for Genoa to take anything from this game, with their best prospects being to deny their visitors a barrage of goals. To that end, The Hard Tackle predicts a 2-0 win for Andrea Pirlo & co.