Arsenal and Wolves will meet at the Emirates on Sunday, with both sides eager to return to winning ways in the Premier League.

Gameweek 10 of the 2020/21 Premier League season continues into Sunday, with three matches on show on the day. Four of the ‘Big Six’ sides will take the field with the action ending at the Emirates, where Arsenal will play hosts to Wolves, hoping to end a difficult November on a high.

Arsenal have blown hot and cold in the first two months of the season after starting their campaign with four wins in a row. However, since suffering the 3-1 defeat to Liverpool, the Gunners have gone on to win just two of their six subsequent Premier League games, a run of results that has left them 12th on the table.

So far in November, which was often the worst month of the season back in the days of Arsene Wenger, Arsenal have won, drawn and lost one league game apiece. More frustratingly, though, the north Londoners have found the back of the net as many times too (1). Wolves, on the other hand, have not been much too different, as compared to their hosts on Sunday.

Nuno Espirito Santo & co. have just domestic football to concentrate on this season. However, despite not being burdened by European excursions, Wolves have only won four of their nine games so far, sitting just a point ahead of Arsenal, albeit 9th on the Premier League table.

The corresponding fixture, just as the clubs’ most recent Premier League games, ended in a draw, with Pierre-Emerick Aubameyang handing Arsenal the lead midway through the first half before Raul Jimenez pulled Wolves level later on in the game to ensure a share of the spoils. Ahead of the latest meeting between the two sides, The Hard Tackle takes a closer look at the encounter.

Nicolas Pepe and Gabriel Martinelli are two of ten possible absentees for Arsenal against Wolves. (Photo by Daniel Leal-Olivas/AFP via Getty Images)

In the last couple of weeks, Mikel Arteta has seen his squad’s roster issues pile up considerably. Against Wolves on Sunday, the Arsenal manager could be without as many as ten first-team players due to injuries, suspension and positive coronavirus tests.

As per BBC, Bukayo Saka has recovered from the dead leg he sustained at Leeds United last week, although he could be subject to a late fitness test to determine his availability. The likes of Willian, David Luiz and Thomas Partey, though, remain major doubts and might only be fit enough to make the bench.

The potential availability of Mohamed Elneny and Sead Kolasinac also remains unclear after testing positive for COVID-19 during the international break this month. However, Nicolas Pepe misses out after being sent off against Leeds last week, while the likes of Calum Chambers, Pablo Mari and Gabriel Martinelli are long-term absentees.

With Arteta grappling with so many problems, several of the members of Sunday’s starting lineup against Wolves practically pick themselves. That goes for Rob Holding and Gabriel Martinelli at the heart of the Arsenal defence as well as Dani Ceballos and Granit Xhaka in the midfield double pivot.

Hector Bellerin and Kieran Tierney are expected to return as the full-back pairing after being given a breather for the midweek UEFA Europa League fixture. The same goes for Bernd Leno, who comes in for Runar Alex Runarsson in goal.

Joe Willock ought to continue reprising the no. 10 role as well, following an impressive display in Europe against Molde. Reiss Nelson is likely to keep hold of his spot as well, owing to the potential absence of Willian. Saka, though, should return, if the suggestions by BBC are correct. Finally, Arsenal captain Pierre-Emerick Aubameyang will lead the line for the Gunners against Wolves. 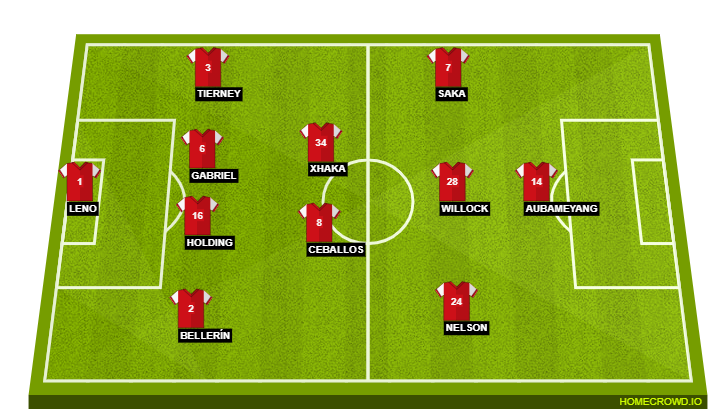 Unlike his counterpart in the Arsenal dugout, Nuno Espirito Santo hardly has any problems that are hampering his preparations ahead of the trip to the capital. On Sunday, the Wolves boss will be bereft of the services of just two first-team players.

Jonny remains on the sidelines due to his long-term knee injury and is still well of his return to the pitch. Roman Saiss is also unavailable as he continue to self-isolate after testing positive for COVID-19. However, Wolves captain Conor Coady is set to return after missing last weekend’s draw with Southampton due to his own positive coronavirus test.

Coady ought to replace Joao Moutinho in the lineup, with Wolves lining up in their trademark 3-4-3 formation against Arsenal. Coady will sit in the middle of the three-man central defensive unit, with Willy Boly and Max Kilman being his partners in defence, which will provide cover to Rui Patricio.

Nelson Semedo and Rayan Ait-Nouri ought to be the two wing-backs for the visitors, with the duo flanking Leander Dendoncker and Ruben Neves. The midfield pairing will hope to keep a lid on Arsenal’s creative output while looking to pull the strings from the middle of the park.

Finally, in attack, Raul Jimenez is a certainty as the central striker. Adama Traore, Pedro Neto and Daniel Podence will be vying for the two wide slots, with Neto likely to miss out again. However, the Portuguese international should pose a great deal of threat when he appears of the bench later on in the game. 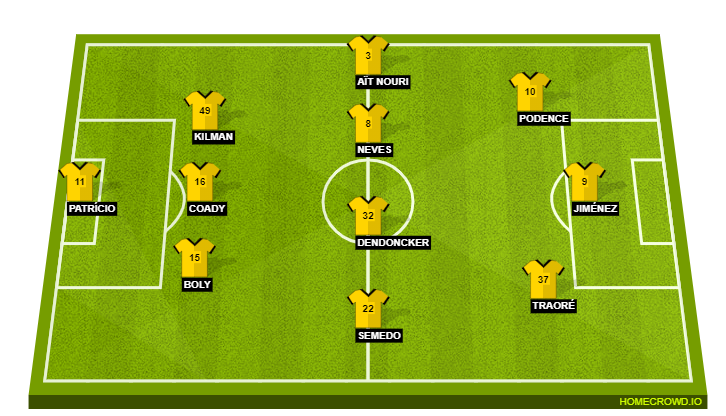 Will Aubameyang deliver the goods against Wolves? (Photo by Alex Pantling/Getty Images)

In a season to forget, Pierre-Emerick Aubameyang remains Arsenal’s leading man, albeit with an abject record of his own. The Arsenal captain has managed to find the back of the net just four times in 11 games across all competitions, with the tally in the Premier League – two goals in nine outings – being even more woeful.

So, while the Gunners still look up to him to deliver the goods, Aubameyang himself is incredibly helpless leading the line for a side that has little to no creativity to show for in games. That is surely reflected in the fact that he, as a striker, has created the most chances for Arsenal this term.

That he has been deployed in a myriad of positions only worsens the matters for Aubameyang, even though he insists that he is willing to play in any position for the team. Against Wolves, however, it will be up to Aubameyang to put all these issues in the past and make a difference for Arsenal. Will the star striker rise to occasion? Not long left to find out.

This is a game between two sides that do not really trouble their opposition goalkeepers a whole lot. In fact, only three sides – those being 17th places Burnley, 19th placed West Bromwich Albion and rock-bottom Sheffield United – have troubled the scorekeepers less often than Arsenal and Wolves (9 each) so far this season in the Premier League.

Having said that, both teams have reasonably impressive defensive records as well, with only table toppers Tottenham Hotspur conceding fewer goals than Wolves and Arsenal (10 each). So, for all intents and purposes, it does not look like either side has the edge, with the game likely to be played out in midfield for the most part.

Arsenal have not kept a clean sheet in any of their last seven Premier League home games and the longing for a clean sheet at home should continue on Sunday as well, with the match likely to end all square. To that end, The Hard Tackle predicts a 1-1 draw in this one.