Atletico Madrid will hope to keep heaping the pressure on La Liga table toppers Real Sociedad when they take on Valencia at the Mestalla on Saturday.

La Liga action resumes this Friday with Matchday 11 of the 2020/21 season late before the football hits next gear on the weekend. The second game on Saturday will be played at the Mestalla, where Valencia will play hosts to Atletico Madrid, with both teams looking to return to winning ways.

Valencia have blown hot and cold in the early stages of the 2020/21 season. With the first quarter of the campaign done and dusted, Los Che sit 10th on the table, having managed just three wins in 10 games. However, the hosts ought to be reasonably satisfied with their position on the table, considering all the instability that threatened to derail their campaign at the onset.

Atletico Madrid, on the other hand, are looking the part of La Liga title contenders after quite some time. Diego Simeone has added layers to his system and that reflects in the fantastic start that Los Rojiblancos have made to 2020/21. The visitors are the only remaining unbeaten side in Spain’s top-flight and are currently second, three points behind Real Sociedad with two games in hand.

The corresponding fixture last season ended in a 2-2 draw, with Atletico Madrid twice going ahead before Valencia restored parity as many times to ensure a share of the spoils. Ahead of the latest meeting between the two sides, The Hard Tackle takes a closer look at the encounter.

Jose Gaya misses out due to injury. (Photo by Ander Gillenea/AFP/Getty Images)

Javi Gracia has one fresh roster issue hampering his preparations ahead of the visit of Atletico Madrid. On Saturday, the Valencia manager will be bereft of the services of four first-team players, with Denis Cheryshev a fresh absentee.

Cheryshev has had a coronavirus scare ahead of the fixture and will miss out. In his stead, Goncalo Guedes should come in on the left side of the four-man midfield. The major absentee for Valencia, though, is left-back Jose Gaya, who misses out due to a hamstring injury.

In Gaya’s absence, Toni Lato becomes a certainty on the left side of the Valencia defence, with Daniel Wass starting on the right flank again. The central defensive partnership will be manned by Gabriel Paulista and Hugo Guillamon yet again, especially with Mouctar Diakhaby still on the sidelines due to a hamstring issue. Jaume Domenech is a certainty in goal.

Up ahead in midfield, with Valencia likely to mirror Atletico Madrid’s setup with a 4-4-2 formation, Carlos Soler and Uros Racic will be stationed in the middle, with the impressive Yunus Musah, who is reportedly on the radar of Arsenal and other clubs, stationed on the right wing.

Finally, the strike partnership should comprise of Kang-in Lee and the fit again Maximiliano Gomez, who should come in for Kevin Gameiro. Lee will play off of Gomez, operating as an auxiliary no. 10, with Gomez acting as the central striker. 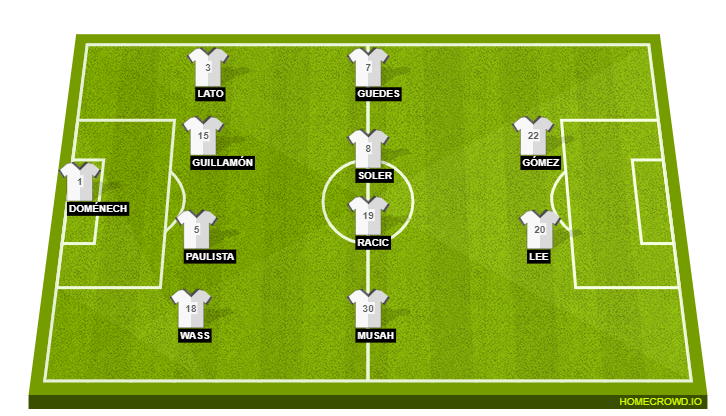 Diego Simeone is a bit stretched for options, with a number of problems to contend with before his squad pays the Mestalla a visit. On Saturday, the Atletico Madrid manager will likely have to make do without as many as six first-team players.

The sheer number of absentees means changes will be kept to a bare minimum, with Simeone not having many quality options at his disposal. Jan Oblak is an automatic pick between the sticks and will see Atletico Madrid line up in a 4-4-2 formation ahead of him.

Stefan Savic and Jose Gimenez, who has appeared on Chelsea’s radar again, will pair up at the heart of the Atletico Madrid defence, with Kieran Trippier a certainty as the right-back. On the left flank, Mario Hermoso, who has been excellent as the left-back lately, should replace Renan Lodi. The return of Hermoso means Atletico Madrid will essentially resemble a 3-5-2 shape in possession.

Up ahead in midfield, Koke and Saul pick themselves as the central midfielders, who will primarily do the containing job before looking to carry the ball forward. Marcos Llorente, who has been transformed under Simeone, will be deployed as the right-midfielder again, with Yannick Carrasco deployed on the left.

Upfront, with Suarez and Costa both unavailable, Angel Correa picks himself as Joao Felix’s strike partner. All eyes on Saturday, though, will invariably be on Felix, who has been the star man for Atletico Madrid so far this season. 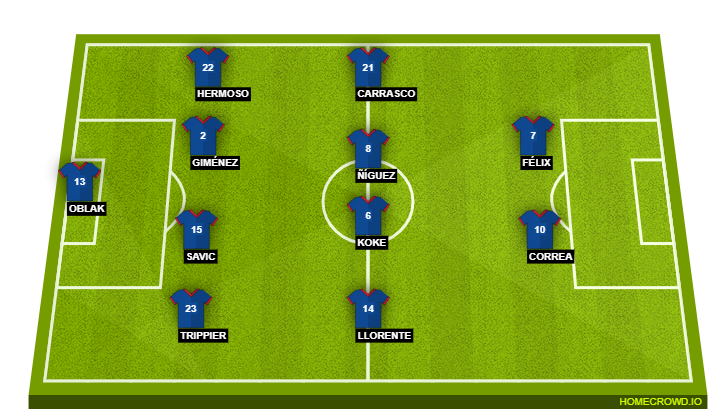 After a slow start to life as an Atletico Madrid player, Joao Felix has gone on to justify all the hype that his talent has generated in recent years. Now embracing more responsibility and becoming more prolific in the final third, the Portuguese international is starting to become Atleti’s talisman.

Against a Valencia side that might not relent a lot at the back at the Mestalla, Felix’s output will hold the key for the Colchoneros. A big test for Felix and his credentials, as he continues to grow within the Atletico Madrid first-team setup.

This has all the makings of a closely-contested affair. Valencia might not be a force to reckon with, but they can certainly clean up at the back and make things difficult for their opponents. Having said that, Atletico Madrid boast the best defence in La Liga, and will not give an inch to their hosts.

Going forward, Atletico Madrid have improved a great deal, but the continued absence of Luis Suarez means they might find it a tad bit difficult to slice open the Valencia defence as easily. The gulf in quality, though, should pull the visitors through and that is why The Hard Tackle predicts a 1-0 win for Diego Simeone & co.