Real Madrid will be eager to return to winning ways in La Liga when they host Deportivo Alaves to the Alfredo Di Stefano Stadium on Saturday.

The action is coming thick and fast for the European elite and in La Liga, Matchday 11 of the 2020/21 season begins on Friday. Real Madrid will be back in action after a mere two-day break, as they play hosts to Deportivo Alaves at the Alfredo Di Stefano Stadium on Saturday night.

Real Madrid have been a tad bit slow off the blocks in the defence of their La Liga crown. Zinedine Zidane’s men have managed to win just 5 of their 9 league games so far, failing to win each of the last two – each being away games. Back in the comforts of their home after another game on the road – this time at Inter Milan – the Merengues will be buoyed by their 2-0 win in Europe.

Alaves, on the other hand, have been quite dreadful in the early stages of the 2020/21 season. The Basque outfit have won just two of their 10 games so far in La Liga. With 10 points on the board, Pablo Machin & co. are 15th on the table, just three points outside the relegation zone, although they have not lost any of their last four games.

Dani Carvajal is on the sidelined again; this time due to a groin injury. (Photo by Denis Doyle/Getty Images)

The hits just keep on coming for Real Madrid. Zinedine Zidane was already bereft of the services of five first-team players due to injuries and other issues. The list of absentees has now extended to half-a-dozen ahead of the visit of Deportivo Alaves.

Dani Carvajal is the latest player to be sidelined, having sustained a groin injury in training. The Spaniard joins captain Sergio Ramos, Alvaro Odriozola, Federico Valverde, Luka Jovic and Karim Benzema as being unavailable to take on Alaves.

In Carvajal’s absence, Nacho should move to the right side of the Real Madrid defence, seeing as Odriozola is also missing. With Nacho starting as the right-back, Raphael Varane will have Eder Militao as his central defensive partner, while Marcelo should come in for Ferland Mendy for a rare start. In goal, there is no looking past Thibaut Courtois.

Up ahead in midfield, a change in shape is on the cards, with Zidane reverting to the 4-3-3 formation. The shift in the setup will see Martin Odegaard make way for Isco, whose future remains uncertain. Luka Modric could be afforded a breather ahead of the crucial European excursion in the coming week.

In his stead, Casemiro should start, returning for the first time since recovering from coronavirus. The Brazilian will sit at the base of the three-man midfield, with Toni Kroos and Isco sitting beside him, looking to push Real Madrid forward.

Finally, in attack, Eden Hazard is a certainty, while Mariano Diaz is an automatic pick as well, with Benzema and Jovic still not at Zidane’s disposal. Marco Asensio, Rodrygo Goes and Vinicius Jr. are vying for the final spot in the side, with Rodrygo likely to get the nod after a solid display in the UEFA Champions League this week. 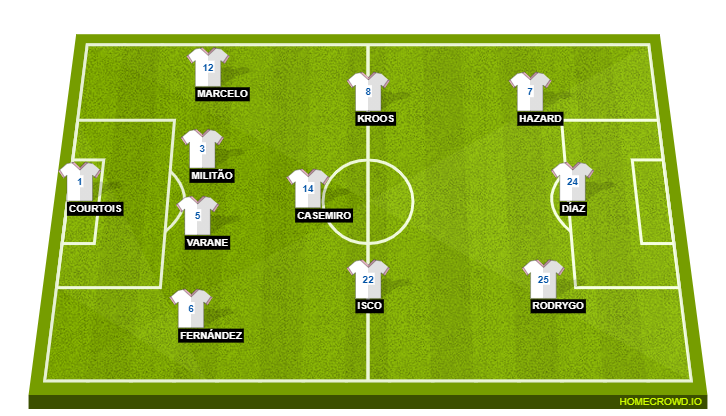 Like his counterpart in the Real Madrid dugout, Pablo Machin has a fresh roster issue hampering his preparations ahead of the trip to the capital. However, unlike Zinedine Zidane, the Deportivo Alaves manager has only two players missing.

Pere Pons remains unavailable due to a foot injury that is likely to keep him away from action for a few more weeks. In addition, Manu Garcia is also sidelined after testing positive for COVID-19 and is now isolating. Otherwise, Machin has a fully-fit squad to take to Real Madrid.

The Alaves manager had experimented with a 3-5-2 formation for the 2-2 draw with Valencia last time out. However, against Real Madrid, Machin should revert to type, with the visitors lining up in a 4-4-2 formation in front of goalkeeper Fernando Pacheco.

Florian Lejeune and Victor Laguardia will likely pair up at the heart of the Alaves defence and the duo will be key in keeping the backline organised. Lejeune and Laguardia will be flanked by Ximo Navarro and Ruben Duarte, who will primarily stick behind before charging forward to look for crossing opportunities higher up the pitch.

Up ahead in midifeld, Edgar Mendez is available after serving a one-match ban. The 30-year-old ought to return to the starting lineup straightaway, taking his place on the right side of the Alaves midfield, with Jota Peleteiro starting on the left flank.

In the middle, Rodrigo Battaglia and Tomas Pina are certainties due to the absence of Pons and Garcia. Finally, there is no looking past Lucas Perez and Joselu to form the strike partnership for Alaves against Real Madrid, and the duo will look to heap the pressure on a makeshift defence. 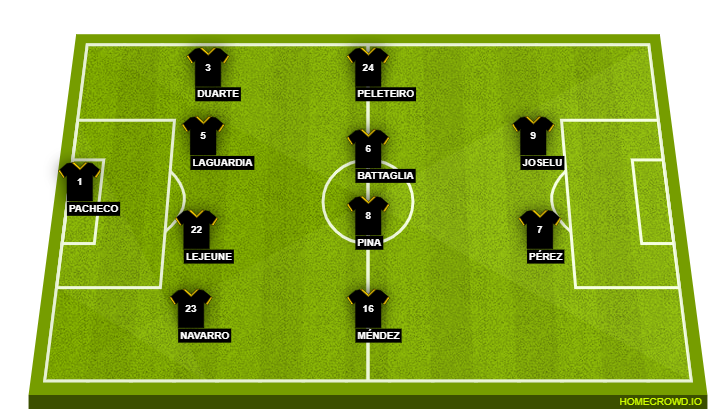 Real Madrid have struggled to find stable footing so far this season due to the constant chopping and changing. However, the return of Casemiro should provide them with some sort of a solid base that they need to get their La Liga campaign on track.

The Brazilian international’s enforcing ability has been sorely missed in each of the last two league games and he will look to set the record straight against Deportivo Alaves. Expect Casemiro to reinstate some of Real Madrid’s lost solidity in the middle, thereby paving the way for a much-needed win.

Real Madrid came through the tricky game against Inter Milan with a crucial win and the result should give them some confidence to build an unbeaten run. However, after playing on Wednesday and again on Saturday, it is clear that the hosts will need as many fresh legs as possible to go on a run.

The return of Casemiro, to that end, should be helpful, with the Brazilian giving Real Madrid the solid base they need to keep Deportivo Alaves at bay. Eden Hazard took some big steps forward last time out as well and if he can continue his upward curve, it will be a cruise. Expect a keenly contested affair, albeit one with Real Madrid winning it 2-0 to get back to winning ways in La Liga.