Arsenal will have the chance to progress to the UEFA Europa League Round of 32 when they take on Molde at the Aker Stadium on Thursday.

The 2020/21 UEFA Europa League resumes this Thursday with Matchday 4 of the group stages. In Group B, Arsenal will be travelling to Norway to lock horns with Molde at the Aker Stadium, with a chance to book their place in the knockout stages of the competition.

Arsenal might have been blowing hot and cold in the Premier League but in the Europa League, the Gunners have been largely efficient so far. While not always dazzling, Mikel Arteta & co. have managed to win each of their first three games and will be confident of not letting their recent poor form in domestic football trickle down to their European excursions.

For Molde, on the other hand, the past week or so has been a difficult one. The Norwegian outfit have officially been dethroned as the Eliteserien champions, with Bodo/Glimt securing the title this past weekend. Erling Moe’s men, though, have lost just one of their last 10 matches in all competitions, but the sole defeat came at the hands of Arsenal earlier this month.

The aforementioned reverse fixture, played at the Emirates, ended in a come-from-behind 4-1 win for Arsenal after Martin Ellingsen had handed Molde a first half lead. Ahead of the latest meeting between the two sides, The Hard Tackle takes a closer look at the Europa League encounter.

Erling Moe could have to make do without some key players. (Photo by AFP/Getty Images)

Erling Moe has a couple of fresh injury concerns hampering his preparations ahead of the visit of Arsenal. On Thursday, the Molde manager could be bereft of the services of as many as four first-team players due to various issues.

Right-back Kristoffer Haraldseid remains available due to his ongoing recovery from a cruciate ligament rupture. In addition, Birk Risa and Martin Bjornbak could miss out after picking up knocks this past weekend. Striker Ohi Omoijuanfo is also a doubt after being left out of the squad altogether for the most recent game.

Andreas Linde is a certainty in goal, with Molde expected to line up in a 4-2-3-1 formation that will mirror Arsenal’s system to a great extent. With Haraldseid continuing to be unavailable, Henry Wingo should start as the right-back, with Kristoffer Haugen deployed on the left flank.

The potential absence of Risa and Bjornbak means Sheriff Sinyan will start as a makeshift centre-back, pairing up with Stian Gregersen at the heart of the Molde defence. Up ahead in midfield, Fredrik Aursnes and Etzaz Hussain seem to be certain starters in the double pivot, with the duo primarily tasked with stemming the flow of the Arsenal attacks.

As for Molde’s own attack, captain Magnus Wolff Eikrem will be given a free role higher up the pitch to pull the strings during the offensive phase, with Mathis Bolly and Martin Ellingsen being the two wide men, both of whom will likely bombard central areas. Finally, Leke James will lead the line for the hosts against Arsenal. 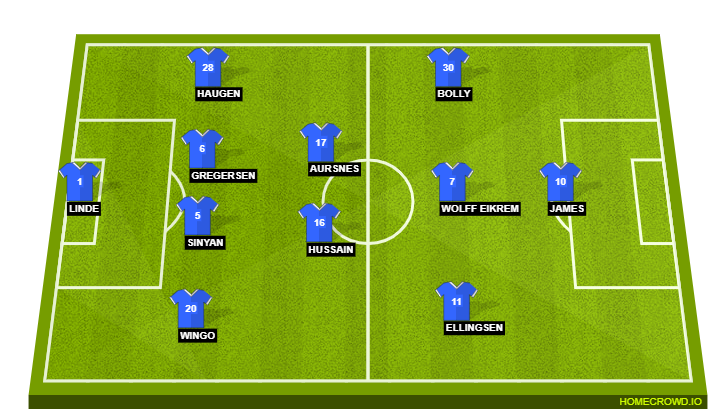 Like his counterpart in the Molde dugout, Mikel Arteta also has a number of fresh issues to contend with ahead of the trip to Norway. Unlike Erling Moe, though, the Arsenal boss will have to make do without over half-a-dozen first-team players instead of just four.

Pablo Mari and Gabriel Martinelli are long-term absentees while Calum Chambers is unavailable as he continues to build his fitness up after recovering from a long-term issue of his own. Apart from the aforementioned trio, Thomas Partey, Sead Kolasinac and Mohamed Elneny continue to remain unavailable, while Bukayo Saka and Willian miss out after sustaining knocks this past weekend.

However, there is some good news to greet as well, with David Luiz travelling for the trip to take on Molde. Luiz, though, might not start, with Shkodran Mustafi and Rob Holding likely to pair up at the heart of the Arsenal defence. Cedric Soares and Ainsley Maitland-Niles should come in as the two full-backs, with Runar Alex Runarsson taking his place between the sticks.

Up ahead in midfield, the continued absence of Partey and Elneny means Granit Xhaka, Dani Ceballos and Joe Willock are certainties as the three midfielders, with Willock being deployed in an advanced midfield role.

Nicolas Pepe had a game to forget against Leeds United on the weekend, but is still expected to start versus Molde, considering Willian is unavailable. Pepe will start on the right side of the Arsenal attack, with Reiss Nelson likely to occupy the left wing slot. Eddie Nketiah should lead the line for the Gunners on Thursday. 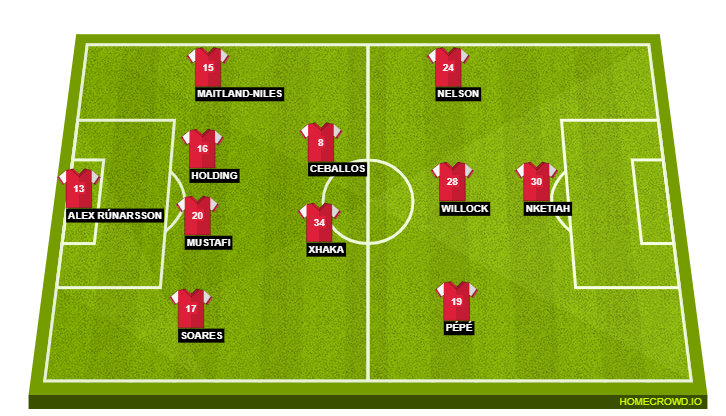 Since Nketiah returned to Arsenal earlier this year after cutting short his loan spell at Leeds United, he has had a mixed bag of a time at the club. The young striker has made some important contributions for the Gunners in the chances that he has been afforded.

However, the opportunities could be wearing thin soon, with Pierre-Emerick Aubameyang shifting back to the central striker’s berth. Nketiah is now virtually competing with Alexandre Lacazette for the backup spot and it will be interesting to see if he grabs the rare chances with both hands. A big outing for Nketiah against Molde.

Arsenal just do not seem to be inspiring any confidence in their cumulative abilities at the moment. While their defence has improved considerably, it has come at the cost of weakening their offensive output exponentially. Having said that, Molde could be missing two of their regular centre-backs, which could leave the Gunners with some key openings on Thursday.

As things stand, Arsenal do seem to have the edge, even if it is a minute one. However, Molde could give them a run for their money, stretching the game deep into injury time. The Hard Tackle predicts a 2-1 win for Arsenal, a place in the UEFA Europa League knockout stages all but in the bag.