Bayern Munich will have the chance to book their place in the UEFA Champions League Round of 16 when they take on Red Bull Salzburg on Wednesday.

The curtains will drop on Matchday 4 of the group stages of the 2020/21 UEFA Champions League this midweek. Holders Bayern Munich will be in action on Wednesday night, when they play hosts to Red Bull Salzburg at the Allianz Arena, hoping to seal progression to the Round of 16.

Bayern Munich have been rampant at the onset of the defence of their Champions League crown, with three wins in as many games thus far. The German heavyweights have also been in fine form in the Bundesliga for the most part, but come into this fixture on the back of a disappointing 1-1 draw with Werder Bremen.

Red Bull Salzburg, on the other hand, are rooted to the bottom of Champions League Group A, after managing just the solitary point from their opening three excursions. In domestic football, the Austrian champions have been in fine touch, although they do come into this fixture on the back of a 1-3 loss to FK Sturm Graz this past weekend.

The reverse fixture, played at the Red Bull Arena earlier this month, ended in a 6-2 win for Bayern Munich after Mergim Berisha had handed Red Bull Salzburg an early lead. Ahead of the latest meeting between the two sides, The Hard Tackle takes a closer look at the encounter.

Hansi Flick has a number of pressing injury concerns hampering his preparations ahead of the visit of Red Bull Salzburg. On Wednesday, the Bayern Munich manager could be bereft of the services of as many as six first-team players.

While Alphonso Davies (ankle) and Joshua Kimmich (knee) are long-term absentees, the likes of Bouna Sarr, Niklas Sule and Corentin Tolisso were ruled out of the contest by Flick during his pre-match press conference. The availability of Lucas Hernandez, though, hangs in the balance.

The French international, however, could be given more time to return to 100%, with David Alaba likely to start as the left-back against Salzburg. On the opposite flank, Benjamin Pavard is a certainty, while Jerome Boateng and Javi Martinez will pair up at the heart of the Bayern Munich defence, with Manuel Neuer taking his place in goal.

Up ahead in midfield, Marc Roca will deputise for the injured Kimmich, with Leon Goretzka providing him company in the double pivot. Thomas Muller will likely reprise the no. 10 role, looking to pull the strings from the free role that he will be handed.

Serge Gnabry and Robert Lewandowski, who was not quite at his best this past weekend against Werder Bremen, are automatic picks in attack. As for the final spot in the final third, Leroy Sane should be given the nod over Kingsley Coman to start on the left flank. 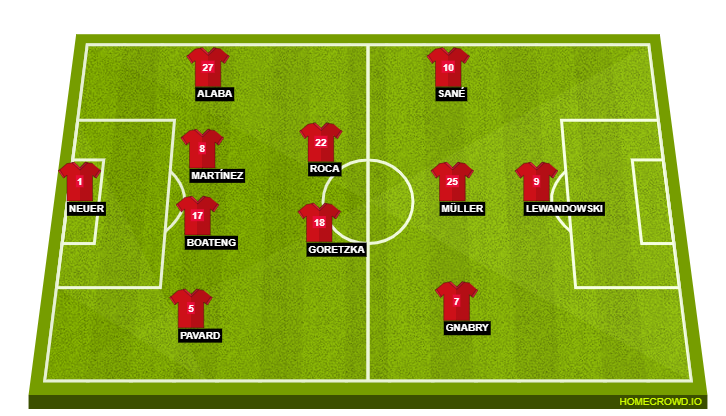 Like his counterpart in the Bayern Munich dugout, Jesse Marsch also has some major issues to deal with before paying a visit to the Allianz Arena. On Wednesday, the Red Bull Salzburg manager will have to make do without at least three first-team players.

The likes of Antoine Bernede, Masaya Okugawa and star striker Patson Daka are certain absentees, while Zlatko Junuzovic’s availability hangs in the balance. However, it is Daka’s absence that could hurt Salzburg the most, with Sekou Koita likely to deputise for him in the strike partnership, where Mergim Berisha will be his partner.

Salzburg ought to line up in a 4-4-2, which could also transform into a 4-2-2-2 during transitions. Talisman Dominik Szboszlai will be under the spotlight and his output will hold the key for the visitors on Wednesday. Szboszlai and Noah Okafor will form the supply chain and the second line of defence.

Mohamed Camara and Enock Mwepu will likely be stationed in the middle of the park, with the duo tasked with keeping a lid on Bayern’s offensive output. At the back, Maximilian Wober and Andre Ramalho will pair up at the heart of the Salzburg defence, with Andreas Ulmer and Rasmus Kristensen being the full-back duo. Cican Stankovic is a certainty between the sticks. 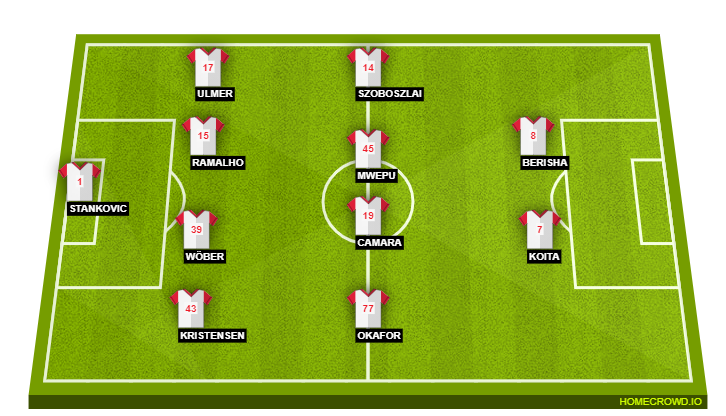 All eyes will invariably be on Robert Lewandowski, as they always are when he is on the pitch. But, one more man will have onlookers keeping a keen eye on him. Dominik Szoboszlai has the world at his feet and the who’s who of European football hot on his trails.

On Wednesday, the Hungarian international will have the chance to boost his status further, and a top-class showing could well attract a few more suitors. His primary objective will be to somehow engineer a shock result and a vulnerable Bayern Munich defence could well be ripe for the taking for Szoboszlai.

Bayern Munich do not come into this match in the best of positions, as far as the state of their squad is concerned. However, the UEFA Champions League holders have a formidable unit and their attack should be good enough to pull them through for the umpteenth time.

Having said that, with some key defensive-minded players missing, Red Bull Salzburg will surely fancy their chances of breaching Manuel Neuer’s net. The hosts, though, should still be largely comfortable, which is why The Hard Tackle predicts a 3-1 win, which sends Bayern Munich through to the knockout stages of the competition.