Manchester United will hope to take a step towards the knockout stages of the UEFA Champions League when they host Istanbul Basaksehir on Tuesday.

The 2020/21 UEFA Champions League resumes this midweek with Matchday 4 of the group stages. Group H is poised tantalisingly following the results on Matchday 3 and things could be complicated further when Manchester United play hosts to Istanbul Basaksehir on Tuesday night.

Manchester United made an electric start to their Champions League campaign with wins over PSG and RB Leipzig providing them with a superb chance to qualify for the Round of 16. However, the group was left a tad bit evenly poised when they suffered a shock 2-1 defeat the hands of Istanbul Basaksehir. Since then, the Red Devils have bounced back with back-to-back wins in the league.

Istanbul Basaksehir, on the other hand, were winless in the UEFA Champions League until their big victory over Manchester United, which leaves them level on points with third-placed PSG. The Turkish outfit, though, have since lost two of their subsequent three games and come into this fixture on the back of a 3-2 defeat to Besiktas in the Super Lig.

As iterated already, Istanbul Basaksehir beat Manchester United 2-1 in the reverse fixture, with Demba Ba and Edin Visca scoring for the Turks before Anthony Martial pulled one back for the Red Devils. Ahead of the latest meeting between the two sides, The Hard Tackle takes a closer look at the encounter.

Paul Pogba could be available if he recovers from the knock that forced him to miss Manchester United’s last game. (Photo by Dan Istitene/Getty Images)

Ole Gunnar Solskjaer does not have any fresh roster issues hampering his preparations ahead of the visit of Istanbul Basaksehir. On Tuesday, the Manchester United manager will only be bereft of the services of three first-team players.

Luke Shaw continues his spell on the sidelines due to a hamstring injury while Eric Bailly recovers from a muscle injury. Jesse Lingard is also unavailable as he is self-isolating after being in contact with a positive coronavirus case. Meanwhile, Solskjaer is sweating over the fitness of Paul Pogba, who missed the game against West Bromwich Albion this past weekend due to a knock.

With Pogba’s availability being touch and go, it is unlikely that the Frenchman starts, with Scott McTominay likely to return to the midfield double pivot to partner Fred. The duo’s presence in the middle of the park should ensure a more solid presence in midfield as compared to the previous tie against Istanbul Basaksehir.

In attack, there is only likely to be one change made, with Edinson Cavani replacing the underperforming Anthony Martial as the central striker. Bruno Fernandes will play off of Cavani, with Marcus Rashford and Juan Mata being the two wide men for Manchester United, as Mason Greenwood continues his recovery trail.

Finally, in defence, there is unlikely to be a change, with Harry Maguire having Victor Lindelof as his central defensive partner, while Aaron Wan-Bissaka and Alex Telles continue as the full-back pairing. David de Gea remains the obvious pick in goal, following yet another convincing showing between the sticks. 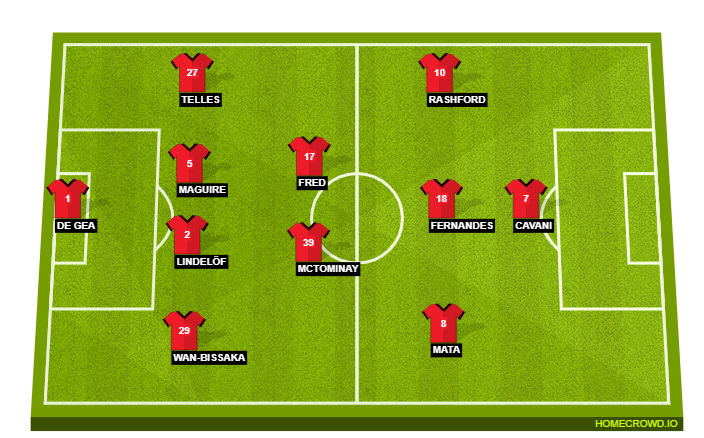 Like his counterpart in the Manchester United dugout, Okan Buruk does not have any fresh injury issues to contend with before paying a visit to Old Trafford. On Tuesday, the Istanbul Basaksehir boss will have to make do without three first-team players as well.

Regular full-back Junior Caicara continues to be unavailable due to an Achilles injury, while the other two absentees are forwards Enzo Crivelli and Danijel Aleksic, with both the players recovering from their respective issues.

In the absence of Junior Caicara, former Manchester United defender Rafael remains the obvious pick on the right side of the Istanbul Basaksehir defence. On the opposite flank, Boli Bolingoli is a certain starter.

Martin Skrtel, who was excellent in the reverse fixture, and Alexandru Epureanu will pair up at the heart of the defence, with Mert Gunok set to take his place between the sticks after testing negative for COVID-19 and subsequently travelling to Manchester.

Up ahead in midfield, Mahmut Tekdemir will slot in as the deepest of the three midfielders, looking to keep a lid on Bruno Fernandes’ output. The Istanbul Basaksehir captain will receive defensive support from Mehmet Topal and Irfan Can Kahveci, with the visitors settling into a 4-1-4-1 shape on transitions.

Finally, in attack, Demba Ba will lead the line for Istanbul Basaksehir against Manchester United once again, with Edin Visca and Deniz Turuc being the two wide men. Nacer Chadli and Fredrik Gulbladsen will be the backup offensive options for the visitors. 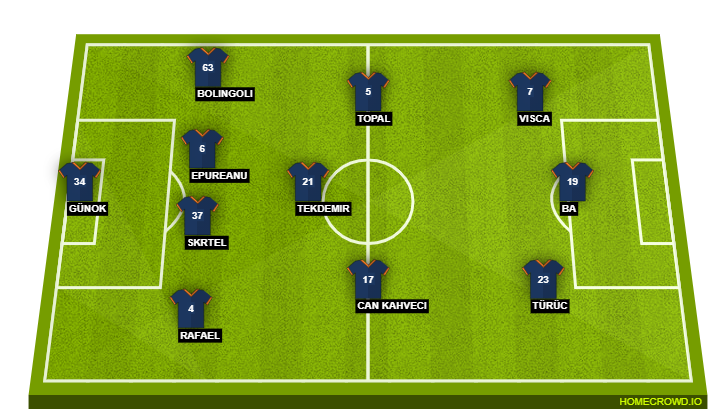 Anthony Martial might have netted the only goal in Manchester United’s embarrassing 2-1 defeat to Istanbul Basaksehir last time out in the UEFA Champions League, but it has been a season to forget so far for the Frenchman. The 24-year-old is carrying no sort of form whatsoever and could perhaps do with some time coming off the bench, thereby creating an opportunity for Edinson Cavani.

Since joining Manchester United, Cavani has almost exclusively appeared off the bench, showing promising signs in each of his outings so far. He might be in the twilight of his career, but his top-class movement is exactly what Manchester United need against a stubborn Istanbul Basaksehir defence. If Cavani is at his best, Manchester United could well enjoy themselves on Tuesday.

Heading into the reverse fixture, it was almost a foregone conclusion that Manchester United would end up with all three points. A dreadful performance has changed the aura around the Red Devils and one can expect another resolute defensive performance by Istanbul Basaksehir.

Manchester United’s poor home record so far this season also seeks to be a cause for concern, but the presence of Edinson Cavani in attack should change things this midweek. The Hard Tackle predicts another tricky outing for Manchester United, but one in which they should come through unscathed, which is why we predict a hard-fought 2-0 win for Ole Gunnar Solskjaer & co.