Real Madrid will be desperate to return to winning ways when they take on Villarreal at Estadio de la Ceramica on Saturday.

Club football resumes this weekend following the end of the final international break of the year. La Liga has some intriguing to dish out, as Matchday 10 of the 2020/21 season begins. On Saturday, reigning champions Real Madrid will be in action, as they pay a visit to Villarreal at Estadio de la Ceramica.

Villarreal have made a solid start to the 2020/21 season under the tutelage of Unai Emery. The Yellow Submarine are currently second in La Liga, just two points behind early leaders Real Sociedad, having lost just one game so far. That solitary loss came nearly two months ago and the hosts have since gone nine without defeat, beating Getafe 3-1 in their most recent fixture.

Real Madrid, on the other hand, have been quite wobbly in the initial months of the new campaign, having already been beaten thrice. In fact, of the 11 games they have played so far, Los Blancos have managed to win just six, with the standout result being the 3-1 success against Barcelona. Most recently, though, Zinedine Zidane & co. suffered a crushing 4-1 defeat to Valencia, which has left them fourth on the table.

The corresponding fixture last season ended in a 2-2 draw, with Gerard Moreno and Moi Gomez scoring for Villarreal, while Gareth Bale twice restored parity before being sent off late on. Ahead of the latest meeting between the two sides, The Hard Tackle takes a closer look at the encounter.

Alberto Moreno is one of three Villarreal players who are likely to miss out against Real Madrid. (Photo by Lluis Gene/AFP/Getty Images)

Unai Emery does not have any fresh injury concerns hampering his preparations ahead of the visit of Real Madrid. On Saturday, the Villarreal manager will continue to be bereft of the services of three first-team players, with defenders Jaume Costa, Juan Foyth and Alberto Moreno likely to miss out.

Emery, though, has more than enough cover in his squad to cover for the absence of the trio. Sergio Asenjo will take his customary place in goal, with Villarreal expected to shape up in a 4-3-3 formation in front of him.

Alfonso Pedraza should start ahead of Pervis Estupinan in the left-back slot in the absence of Costa and Moreno. On the opposite flank, there is no looking past Mario Gaspar. At the heart of the Villarreal defence, Pau Torres and former Real Madrid defender Raul Albiol ought to pair up.

Up ahead in midfield, Vicente Iborra will be tasked with keeping things tight, the objective being to curb Real Madrid’s offensive flow through the middle. Iborra will likely be accompanied by Dani Parejo and Manu Trigueros, with the former being in-charge of providing the forward thrust while the latter will provide defensive support.

Finally, in attack, Paco Alcacer could once again lead the line for Villarreal, with Gerard Moreno being deployed on the right wing for a second successive game. On the left flank, Moi Gomez ought to get the nod over the likes of Alex Baena and Takefusa Kubo, on loan from Real Madrid. 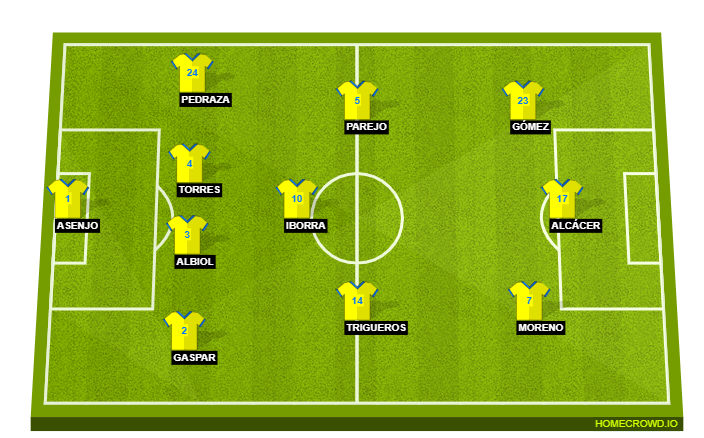 Real Madrid are one of several clubs that might feel hard done by following the end of the dreaded international break. Granted, Zinedine Zidane will have to make do without just three first-team players against Villarreal on Saturday, but a few others have their availability as touch-and-go.

The major absentee for Real Madrid is captain Sergio Ramos, who misses out due to the hamstring injury he sustained in Spain’s UEFA Nations League tie against Germany earlier this week. Apart from Ramos, the visitors are also travelling to Estadio de la Ceramica without key midfielder Federico Valverde and Luca Jovic, who has tested positive for COVID-19.

Meanwhile, Raphael Varane picked up a shoulder injury on international duty and is not fully fit. However, the Frenchman is expected to start against Villarreal, with Nacho, available again after recovering from injury, expected to be his central defensive partner.

Eder Militao, Casemiro and Eden Hazard have all recovered the coronavirus, but Hazard is the only player who has been picked in the travelling squad by Zidane. Like Casemiro and Militao, star striker Karim Benzema misses out as well, perhaps as a precaution ahead of the big game against Inter Milan in the coming week. However, Dani Carvajal is back after recovering from injury.

Nacho and Militao should, therefore, have Carvajal and Ferland Mendy for company in the backline, with Thibaut Courtois, who will hope to avoid a repeat of the bizarre error he committed in Belgium’s 4-2 win over Denmark this week, taking his place between the sticks.

In the absence of Benzema and Jovic, Mariano Diaz should get a rare opportunity to lead the line for Real Madrid, with Eden Hazard making his way back into the side on the left flank. Marco Asensio should occupy the right flank, with Martin Odegaard reprising the no. 10 role. Finally, with Casemiro unavailable, Luka Modric and Toni Kroos should form the double pivot, with the duo having added defensive responsibility. 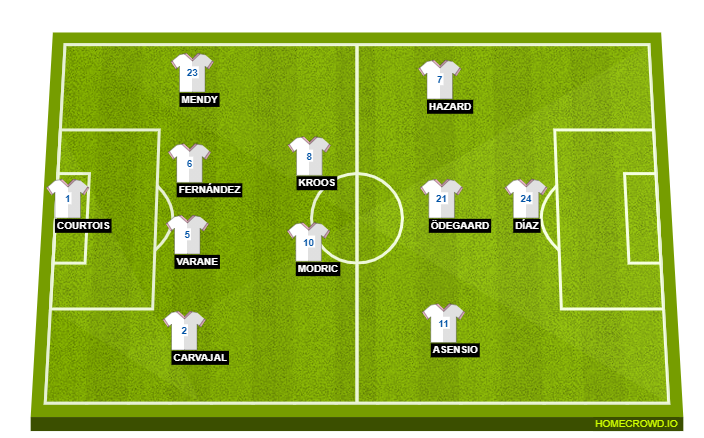 Eden Hazard is back in contention for Real Madrid. (Photo by David Ramos/Getty Images)

Real Madrid just cannot seem to catch a break at the moment. Following the embarrassing loss to Valencia, the Merengues have lost the services of Sergio Ramos and Karim Benzema, meaning defence and attack both have a depleted look. However, Eden Hazard will hope to turn Real Madrid’s fortunes around with his trademark one-man show.

Hazard has not been able to showcase his best since joining the club last year. But, the Villarreal fixture is just the game for him to get back to his very best and inspire a big win for Real Madrid. Will he deliver the goods, though, or will the hosts make their initiative – gained from the absence of Ramos and Benzema – count?

Real Madrid just have not managed to kick on at the start of the 2020/21 season and need a shot in the arm. That shot could well have come in the form of Eden Hazard’s return, but Los Blancos are constantly taking a step ahead then back, with Karim Benzema unavailable. Furthermore, the absence of Sergio Ramos could be telling.

The likes of Paco Alcacer and Gerard Moreno will, thus, fancy their chances against a frail Real Madrid defence. On the opposite end, Benzema’s unavailability will definitely hurt and all signs point towards a popular Villarreal win. The Hard Tackle predicts the hosts to narrowly take this 2-1, with Real Madrid suffering a second successive defeat.