A place on the summit of the Premier League will be on the line when Liverpool welcome Leicester City to Anfield on Sunday.

Gamweek 9 of the 2020/21 Premier League season continues into Sunday, with the proceedings for the day ending in potentially blockbuster fashion. Liverpool will play hosts to Leicester City at Anfield, with top spot on the table up for grabs.

Liverpool have not quite been at their best in the early days of the 2020/21 season, with a wobbly end to last term trickling down to the new campaign. While the Reds have only lost one game so far – the embarrassing 7-1 trouncing at the hands of Aston Villa – they have been running games too close and always look ripe for the taking defensively even before Virgil van Dijk was sidelined.

Leicester, on the other hand, have appeared to be keen on making amends after narrowly missing out on a top four finish last season. While the Foxes have lost twice already, they have been making winning a habit, either by garnering all three points in scrappy manner or by blowing teams away. That has enabled Brendan Rodgers & co. to leap to the top of the table, leading Liverpool by a point.

The corresponding fixture last season saw Liverpool beating Leicester 2-1, with Sadio Mane putting the Reds ahead in the first half before James Maddison scored an 80th minute equaliser, only for James Milner to win the game with a late penalty. Ahead of the latest meeting between the two sides, The Hard Tackle takes a closer look at the encounter.

Virgil van Dijk and Jordan Henderson are two of several Liverpool players who miss out against Leicester City. (Photo by Paul Ellis/AFP via Getty Images)

Jurgen Klopp just cannot manage to catch a break when it comes to the roster issues that have constantly hampered his squad in the first couple of months of the season. Against Leicester City on Sunday, the Liverpool manager could be bereft of the services of as many as nine first-team players.

While Virgil van Dijk (knee) and Trent Alexander-Arnold (calf) were already on the sidelines – the latter’s injury kicking up the five substitutes rule debate once again – the Reds have now lost a third member of their first-choice backline after Joe Gomez sustained a long-term knee injury that might rule him out for the rest of the season.

There were fears over the availability of Andrew Robertson as well, but the Scotsman has shrugged off a minor issue and will start against Leicester. Robertson will likely be joined at the back by Neco Williams, Joel Matip and Nat Phillips, with Alisson Becker taking his place in goal.

Up ahead in midfield, Thiago Alcantara and Fabinho could return, but Klopp will take a late call on their involvements. However, captain Jordan Henderson misses out, meaning Thiago could be fast tracked into the team to start alongside Fabinho and Georginio Wijnaldum in the three-man midfield unit, with Curtis Jones and James Milner being backup options.

Up ahead in attack, the big absentee is Mohamed Salah, who has tested positive for COVID-19. The absence of Salah is the reason Liverpool will be reverting to the 4-3-3 formation, with Sadio Mane starting on the right flank. Roberto Firmino will once again reprise the False Nine role, with Diogo Jota set to be deployed on the left wing. 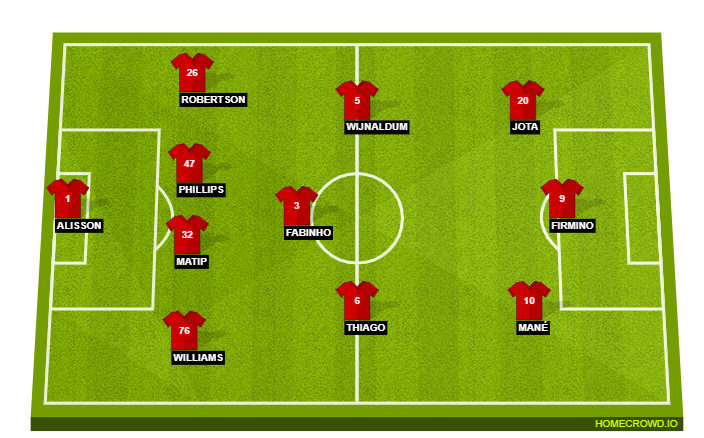 Leicester City, too, have been hampered by a number of fitness issues in the early days of the season. However, Brendan Rodgers is in a much better position than Liverpool counterpart Jurgen Klopp, though he could have to make do without as many as five first-team players.

The likes of Ricardo Pereira, Caglar Soyuncu, Timothy Castagne and Wilfred Ndidi have all rejoined training ahead of the trip to Leicester. However, Rodgers confirmed during his pre-match presser that the game has come too soon for Ricardo, Soyuncu and Ndidi.

Castagne, though, should be back in the starting lineup straightaway, taking his place in the right wing-back slot. Castagne’s return means James Justin will be deployed on the left flank. The three-man central defensive unit should feature Christian Fuchs, Jonny Evans and Wesley Fofana, who has recovered from a minor knee complaint.

Kasper Schmeichel, too, allayed fears of an injury when he featured for Denmark against Belgium this week and will don the armband for Leicester. In Ndidi’s continued absence, Nampalys Mendy, who has been an excellent deputy, will be stationed at the base of the midfield. Youri Tielemans, in stunning form over the international break, will line up alongside Mendy.

Tielemans will provide defensive support to Mendy while also pulling the strings in the middle of the park. Along with Tielemans, the creative impetus will be provided by James Maddison, while Harvey Barnes will play off of central striker Jamie Vardy. Vardy has quite a superb record against Liverpool and will hope to extend that on Sunday. 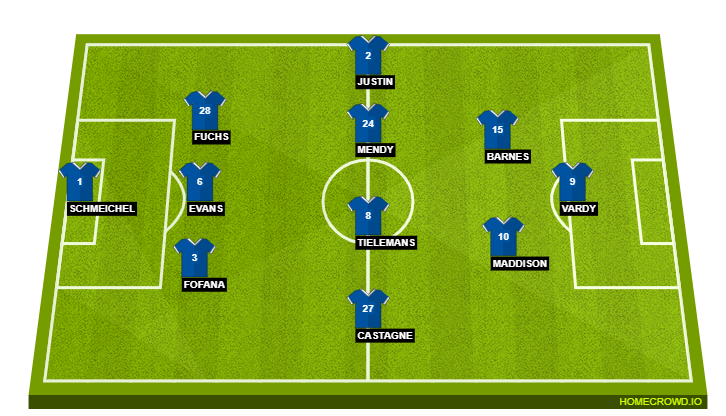 Who else but the ageless wonder? Ageing like fine wine is a term that is often used as a term to describe a select group of footballers, Zlatan Ibrahimovic the player who is bestowed with such a narrative most often. However, there is another such player who just continues to defy logic season after season.

After winning the Golden Boot last season, Jamie Vardy has been on the money so far this term as well. As things stand, no player has found the back of the net more than the 33-year-old. On Sunday he will have the chance to equal Thierry Henry’s Premier League record of scoring in five successive away fixtures.

We all know how much Vardy loves breaking records and stereotypes. With Liverpool in all sorts of trouble at the back, Vardy will surely fancy his chances of extending his fine record against them. A big game for the veteran striker, who can inspire Leicester to a critical win this early in the season.

It is not a frequent occurrence that Liverpool approach a home game in the Premier League with even a remote chance of losing. However, with their squad ravaged by injuries and a coronavirus case, Jurgen Klopp & co. face their biggest test yet to extend their phenomenal 63-game unbeaten run.

In the years that have passed, a Leicester City win at Anfield would be nothing short of a shocker. However, Liverpool just do not seem to have the resources to overpower a defence that has been constantly improving. Furthermore, their defence could well crumble under the pressure of Jamie Vardy & co. So, Leicester should be the team to end the unbeaten run, and we predict a 2-1 win for the visitors.