Switzerland will welcome Ukraine to the Swissporarena on Tuesday, with a place in the next edition’s UEFA Nations League A on the line.

The round robin stage of the second edition of the UEFA Nations League is reaching its end, with Matchday 6 beginning this week. One of the more intriguing match-ups will be played in Lucerne, with Switzerland set to play hosts to Ukraine at the Swissporarena on Tuesday night, with third place in Group A4 up for grabs.

Switzerland have not been in great touch lately, having failed to win a single game in 2020 so far. Vladimir Petkovic’s men have not enjoyed themselves in the latest iteration of the UEFA Nations League either, sitting at the bottom of Group A4 after the first five matchdays and needing a win to avoid the drop to the second division. Their hopes remained alive following a 1-1 draw with Spain last week.

Ukraine, too, seem to have lost their form after the impressive win over Spain last month. Andriy Shevchenko & co. have been defeated in each of their games this month, first being beaten by Poland 2-0 before going down 3-1 to Germany last week. The second defeat has left the visitors out of contention for a place in the Nations League Finals, but are now looking over their shoulders in third.

The reverse fixture, played in Lviv back in September, ended in a 2-1 win for Ukraine courtesy goals by Andriy Yarmolenko and Oleksandr Zinchenko, with Haris Seferovic scoring the only goal for Switzerland. Ahead of the latest meeting between the two sides, The Hard Tackle takes a closer look at the encounter.

Fabian Schar will come in for the suspended Nico Elvedi. (Photo by Pascal Guyot/AFP/Getty Images)

The 1-1 draw with Spain not only cost Switzerland two points late on, it also came at a cost as far as team selection for the final UEFA Nations League group game is concerned. Nico Elvedi was sent off for two bookable offences in last weekend’s match, and misses out against Ukraine due to a suspension.

Vladimir Petkovic has made use of the 3-4-1-2 formation in each of the two games this season, with the objective being to overload midfield. The Switzerland head coach should keep faith in the system against Ukraine as well, although it will come with a minor shift.

Yann Sommer is the automatic pick in goal, and the experienced goalkeeper will need to be at his very best in order to keep Ukraine at bay. The back-three will have Fabian Schar coming in for Elvedi, with Manuel Akanji and Ricardo Rodriguez being his defensive partners. Rodriguez will also have to fulfill his responsibilities on set-pieces, which will hold the key for Switzerland.

Up ahead in midfield, Edmilson Fernandes could make way after playing his part in the goal that Spain conceded. In his stead, Silvan Widmer will likely be deployed as the right wing-back, with the 27-year-old providing the width down his flank. On the opposite flank, Steven Zuber picks himself.

Granit Xhaka will be tasked with keeping things tight in the middle of the park, with Remo Freuler being his partner. Xherdan Shaqiri will once again be given the free role behind the two strikers – likely to be Haris Seferovic and Breel Embolo – and will look to pull the strings higher up the pitch. 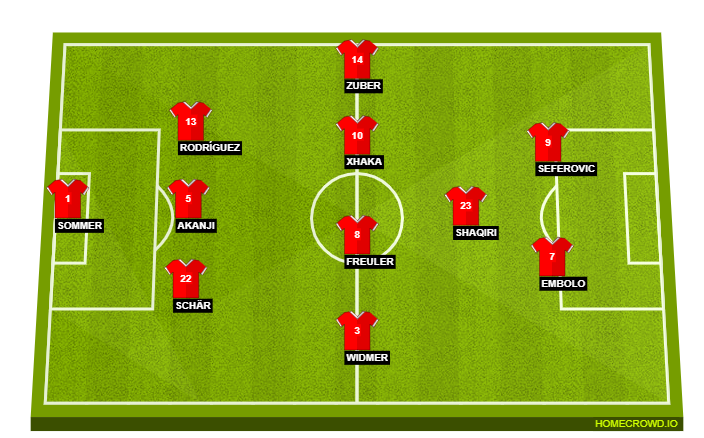 The Ukraine squad continues to be ravaged by positive coronavirus tests. Andriy Shevchenko had already lost the services of Andriy Yarmolenko, Viktor Tsyhankov, Viktor Kovalenko and Serhiy Sydorchuk ahead of the game against Germany. The latest to be sidelined are Eduard Sobol, Yevhen Makarenko and Dmytro Riznyk.

With the squad continuing to be ripped apart, Shevchenko has limited options at his disposal and has been forced to call upon three players from the youth setup, those being Serhiy Buletsa, Heorhiy Sudakov and Oleksandr Nazarenko.

Shevchenko prefers the 4-3-3 formation and should line his side up in the same system against Switzerland as well. In goal, captain Andriy Pyatov will take his place, in what could be a busy evening for him. Pyatov will be protected by a back four comprising of Yukhym Konoplya, Serhiy Kryvtsov, Mykola Matviyenko and Bohdan Mikhaylichenko, who replaces Sobol as the left-back.

Up ahead in midfield, the absence of Sydorchuk means Taras Stepanenko is likely to be deployed at the base of the three-man unit. Stepanenko will receive defensive support from Ruslan Malinovskiy and Oleksandr Zinchenko, who will also be tasked with ensuring smooth transitions.

Finally, in attack, Roman Yaremchuk is expected to be the central striker for Ukraine ahead of Junior Moraes. Out wide, though, there is no looking past Marlos and Oleksandr Zubkov, with very few wide options at Shevchenko’s disposal. 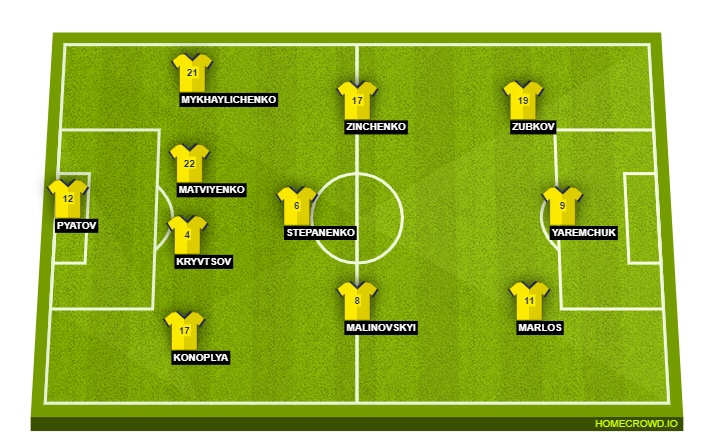 All eyes on Embolo. (Photo by Attila Kisbenedek/AFP/Getty Images)

Goals will be of utmost importance in this match, as both Switzerland and Ukraine look to escape from the clutches of relegation. Switzerland, though, are not a side known for enjoying a great deal of goalmouth action, so it will be a day for one of the profligate forwards to raise their hand and make a lasting impact, with Breel Embolo set for a crucial outing.

The Borussia Monchengladbach forward has managed just 4 goals in 40 games for Switzerland and has not necessarily been known for being prolific. Embolo, though, possesses a pacy outlet that could see him being the difference maker, even if he cannot find the back of the net. Interesting to see if the 23-year-old steps up.

This is one of those games that is really hard to call. Neither side has shown a great deal of form, although both would have fancied their chances against more illustrious opponents last weekend. Having said that, Switzerland seem to have the slightest of edges considering the coronavirus crisis that has engulfed Ukraine.

On top of that, Ukraine have lost their last four away games by an aggregate score of 16-2. That ought to provide the impetus that Switzerland need as well. Expect the game to go right down the wire, with Switzerland managing to eke out a narrow 2-1 win. The result, though, might not be enough for them to remain a part of the UEFA Nations League A.