Top spot in Group 1 of the UEFA Nations League A will be on the line when Italy welcome Poland to the Mapei Stadium on Sunday.

Matchday 5 in the round robin stage of the second edition of the UEFA Nations League will come to an end on Sunday. Italy will be one of several teams in action on the day, when they play hosts to Poland at the Mapei Stadium in a crucial Group A1 clash.

Italy are the only remaining unbeaten team in Group 1 of the UEFA Nations League A, but still find themselves sitting second after playing out three draws in their four games so far. The Azzurri, though, are unbeaten in all competitions for over two years now and come into this game on the back of 4-0 thumping of Estonia earlier this week.

Poland, on the other hand, lead the standings in their group courtesy two wins and a draw from their opening four games. The visitors are on a fine run of form as well, winning four of the six games that they have played in 2020, plundering 12 goals in these fixtures. Jerzy Brzeczek’s team come into this game on the back of a 2-0 win over Ukraine.

The reverse fixture, played last month in Gdansk, ended in a drab goalless draw that saw Italy and Poland manage just four shots on target between them. Ahead of the latest meeting between the two sides, The Hard Tackle takes a closer look at the encounter.

Moise Kean is the latest Italy player to pull out from the squad. (Photo by Claudio Villa/Getty Images)

Roberto Mancini is not with the squad after testing positive for the coronavirus and has been taking the decisions from afar. The Italy head coach has seen his squad being ravaged by injuries and COVID-19 scares and he has had to dissect his unit considerably.

The latest changes come in the form of Pietro Pellegri and Moise Kean’s withdrawals, with Stefano Okaka being called up to the squad over four years after his last appearance for Italy. The hosts should recall a number of regulars who were rested for the game against Estonia when Poland pay them a visit.

Mancini has usually lined his side up in a 4-3-3 formation, but used a 4-2-3-1 last time out. The change in formation did yield a fantastic result, but Italy should revert to the most frequented system against Poland, with Gianluigi Donnarumma returning in goal.

The defence should see the return of Leonardo Bonucci, who will likely have Francesco Acerbi as his partner at the heart of Italy’s defence. Davide Calabria ought to form the full-back pairing with Emerson Palmieri, whose future at Chelsea is uncertain.

Up ahead in midfield, Jorginho and Nicolo Barella will resume their duties, with Sandro Tonali expected to provide them company. Finally, in attack, Andrea Belotti will lead the line for Italy against Poland, with Federico Chiesa and Lorenzo Insigne likely to be the two wide men. 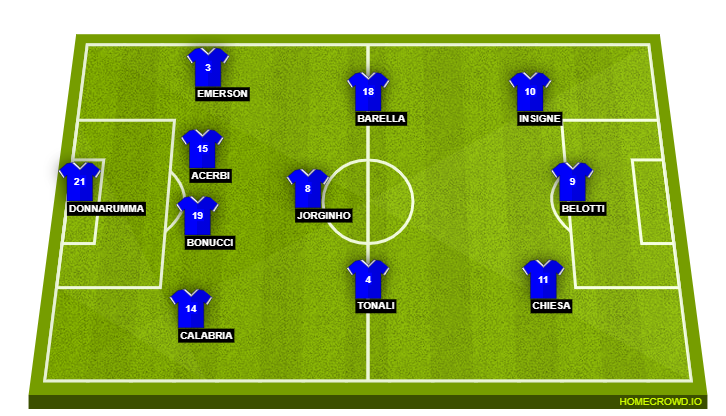 Unlike his counterpart, Jerzy Brzeczek has a full strength squad at his disposal, with only minor alterations being made to the unit since the last international break. Therefore, the Poland head coach has been able to approach the game against Italy with the best possible preparation.

Brzeczek has almost exclusively utilised the 4-2-3-1 formation lately and Poland ought to line up in the same system on Sunday as well. Between the sticks, there is no looking past Wojciech Szczesny. Kamil Glik and Jan Bendarek will form the central defensive partnership, while Tomasz Kedziora and Bartosz Bereszynski likely to be the two full-backs.

Up ahead in midfield, Grzegorz Krychowiak is expected to be the go-to man in the double pivot, with the 30-year-old tasked with keeping things tight in the middle of the park. His partner, likely to be Mateusz Klich, will hope to ensure smooth and quick transitions on the break.

Piotr Zielinski will pull the strings from the advanced midfield position, with Kamil Grosicki and Kamil Jozwiak likely to be the two wide men. Finally, Robert Lewandowski is the obvious choice to lead the line for Poland against Italy. 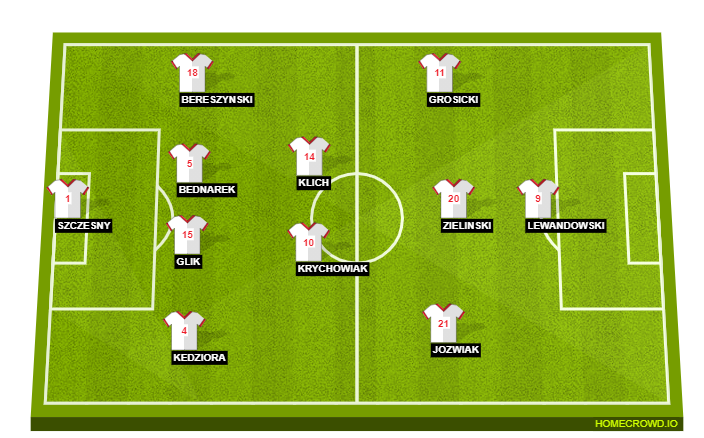 Who else but Robert Lewandowski? 2020 has been the year of the Polish superstar and if it was not cancelled, the 32-year-old could have been celebrating at the Ballon d’Or ceremony this year. Nevertheless, there is no denying the fact that no player has been better than Lewandowski for around 18 months now.

However, the veteran striker has had the tendency of going missing at times in key games in international football over the years. Against Italy, Lewandowski will have the chance to set the record straight and inspire Poland to take another step towards the UEFA Nations League Finals, if he turns up on Sunday. A big game for Lewandowski.

Most of the games featuring Italy and Poland over the years have been too close to call. Sunday’s match-up should be no different, especially with both sides looking to keep things tight at the back. All eyes will invariably be on Robert Lewandowski, but the likes of Lorenzo Insigne and Andrea Belotti will also be eager to leave their mark on the match.

Expect yet another closely-contested affair at the Mapei Stadium, with the game likely to go right down the wire. In the end, though, there might not be much to separate Italy and Poland, which is why The Hard Tackle predicts a 1-1 draw. With Netherlands set to face Bosnia & Herzegovina on the same day, Group 1 of the UEFA Nations League A will be thrown wide ahead of Matchday 6.