Top spot in Group 3 of the UEFA Nations League A will be on the line on Saturday when Portugal welcome France to Estadio do SL Benfica.

The UEFA Nations League is back with its penultimate round of fixtures in the group stages. Matchday 5 of the 2020-22 edition begins on Saturday, with the marquee fixture being played in Lisbon, where Portugal will play hosts to France at Estadio do SL Benfica.

Portugal seem to enjoy competing in UEFA competitions lately, having triumphed in the 2016 Euro before lifting the Nations League title last year. The defending champions have been in fine form in the latest edition as well, winning three of their four games so far to sit atop Group A3, ahead of their next opponents France by goal difference.

The Seleccao come into the game on the back of a thumping 7-0 win over Andorra this week but the same cannot be said about France, who suffered a shock 2-0 defeat at the hands of Finland. Last time out in the Nations League, Les Bleus failed to make it out of the round robin stage and could suffer the same fate this time out as well, depending on Saturday’s result.

The reverse fixture, played at Stade de France last month, ended in a drab goalless draw in a game that saw chances coming few and far between. Ahead of the latest meeting between Portugal and France, The Hard Tackle takes a closer look at the encounter.

Pepe is the only major absentee for Portugal ahead of the visit of France for the UEFA Nations League tie. (Photo by Francisco Leong/AFP/Getty Images)

Fernando Santos does not have any fresh injury concerns hampering his preparations ahead of his side’s latest fixture. In the UEFA Nations League fixture against France, the only major absentee for Portugal remains Pepe, who is out with a foot injury.

Santos rotated his troops for the win over Andorra and while just about every player impressed in the big victory, the Portugal head coach is expected to name an entirely new starting lineup versus France, starting with Rui Patricio in goal, with Anthony Lopes making way.

In front of the Wolves goalkeeper, Portugal will once again line up in a 4-3-3 formation, with Ruben Dias and Jose Fonte expected to form the central defensive partnership, while Joao Cancelo and Raphael Guerreiro ought to be the full-back pairing.

In midfield, Danilo Pereira is likely to play the Anchor Man role, getting defensive support from William Carvalho and Bruno Fernandes. However, on turnovers, the shape will change slightly, with Carvalho and Danilo forming a double pivot, allowing Bruno Fernandes the freedom to roam in the hole and reprise the no. 10 role he excels in.

Paulinho was fantastic on his Portugal debut this week, but is likely to make way for Joao Felix, with Cristiano Ronaldo and Bernardo Silva being the two wide men, meaning the in-form Diogo Jota misses out once again. 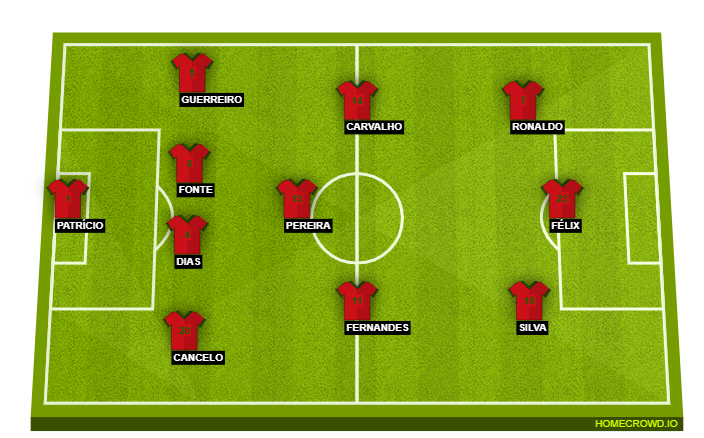 Unlike his counterpart in the Portugal dugout, Didier Deschamps has been constantly troubled by a number of issues plaguing his unit in the latest international break. The France boss has already seen Nabil Fekir and Houssem Aouar pull out from the squad due to injuries.

The latest blow comes in the form of Wissam Ben Yedder’s withdrawal, with the AS Monaco striker testing positive for the coronavirus. On top of that, Deschamps continues to sweat over the fitness of Kylian Mbappe, who is struggling with a hamstring injury.

In fact, Mbappe’s call-up has already left PSG manager baffled and it is unlikely that Deschamps will take a chance with the young forward unless he is fully fit. So, against Portugal, Anthony Martial is expected to form the strike partnership for France, who will line up in a 4-4-2 formation, complete with a midfield diamond.

Antoine Griezmann will sit at the tip of the diamond, hoping to pull the strings for France. Behind him, Paul Pogba will provide creative support with his pinpoint deliveries, although the 27-year-old is under some pressure after a sub-par outing against Finland, amid criticism for his performances for Manchester United.

N’Golo Kante and Adrien Rabiot are likely to complete the midfield combination, with the duo having more of a defensive outlook on the pitch. Benjamin Pavard is another injury doubt, meaning Leo Dubois could start as the right-back yet again, with Raphael Varane, Clement Lenglet and Lucas Digne joining him in the defensive line that will protect Hugo Lloris. 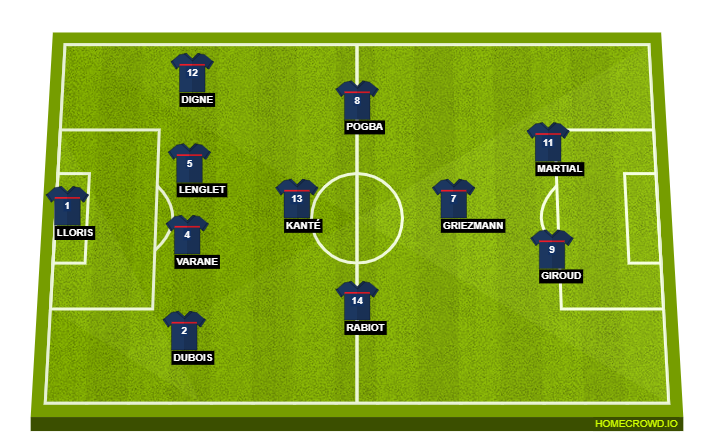 Will Griezmann deliver the goods for France against Portugal? (Photo by Franck Fife/AFP via Getty Images)

It has been an odd season for Antoine Griezmann so far. While he has revelled while turning out for France, the same has not been the case most of the times when he is donning the Barcelona colours. Griezmann, though, has invited some pressure on himself after targetting Marcus Thuram in the aftermath of France’s shock 2-0 defeat to Finland.

The pressure will now be on Griezmann to deliver himself, as France gear up to take on Portugal in a do-or-die game in the UEFA Nations League. Set to start in his preferred central role, this will also be another opportunity for the 29-year-old to make a point pertaining to his best position. A lot on the line for Griezmann.

This one has all the makings of being a close contest yet again. However unlike the reverse fixture last month, there should be goals in the game, with very little separating the two sides. France, though, have an air of instability in their squad owing to the recent loss to Finland and the multiple issues that have plagued the squad already.

Kylian Mbappe’s potential absence is also a big blow to France’s hopes, whereas Portugal will likely be at full strength and come into this game buoyed following their big win over Andorra. So, for all intents and purposes, it looks like the hosts have the slightest of edges to consolidate their place atop Group 3 of the UEFA Nations League A and we predict a 2-1 Portugal win in Lisbon.