Germany will hope to keep their hopes of reaching the UEFA Nations League Finals alive when they welcome Ukraine to the Red Bull Arena on Saturday.

The latest edition of the UEFA Nations League resumes this weekend with Matchday 5 of the round robin stage. The most intriguing section in League A is the tightly-packed Group 4, with Germany and Ukraine set to face off at the Red Bull Arena in Leipzig on Saturday night.

Germany are the only unbeaten team in Group 4 of the UEFA Nations League A, but still sit second in the standings after managing just one win. Coincidentally, that sole victory came against Ukraine and Die Mannschaft are ahead of their visitors on goal difference. The hosts come into this game on the back of a 1-0 win over Czech Republic, which featured a heavily-rotated side.

Ukraine, on the other hand, have won two and lost as many games since being promoted to the Nations League A, but threw Group 4 wide open after beating Spain on Matchday 4. The visitors, though, do not approach the game against Germany in the best of ways, after Poland handed them a 2-0 defeat earlier this week.

The reverse fixture, playing Kyiv last month, ended in a 2-1 win for Germany, courtesy goals from Matthias Ginter and Leon Goretzka, with Ruslan Malinovskiy pulling one back for Ukraine late on. Ahead of the latest meeting between the two sides, The Hard Tackle takes a closer look at the UEFA Nations League encounter.

Joshua Kimmich is a major absentee for Germany in the latest international break. (Photo by Alexander Hassenstein/Bongarts/Getty Images)

Midway through the international break, Joachim Low is set to oversee a shuffling of the squad. The Germany head coach had chosen to rest some of his regulars for the midweek friendly against Czech Republic, and those players are back at his disposal. Meanwhile, a number of players have dropped out, either due to injuries or rotation.

Manuel Neuer, Serge Gnabry, Leon Goretzka, Niklas Sule, Leroy Sane, Matthias Ginter, Toni Kroos and Timo Werner have all joined the squad. Going the opposite way are Nico Schulz, Jonas Hofmann and Ridle Baku, with Hofmann sustaining a thigh injury. Finally, Robin Gosens has also withdrawn from the squad due to a calf injury, while Joshua Kimmich was already unavailable due to a knee injury.

The returning Neuer will be an automatic pick between the sticks while also donning the armband. In front of him, Germany will line up in the 3-4-2-1 formation that has been utilised by Low more often than not. The three-man central defensive unit ought to feature Ginter, Sule and Antonio Rudiger, whose Chelsea future remains uncertain.

Benjamin Henrichs and Philipp Max are the obvious picks in the two wing-back slots, seeing as they are the only recognised options at Low’s disposal. In midfield, Kroos will look to orchestrate the play, with Leon Goretzka shoring up the defensive side of things alongside him.

Up ahead in attack, Timo Werner will spearhead Germany’s attack, with Gnabry and Sane playing off him and supplying the forward thrust. Luca Waldschmidt and Julian Brandt will be the backup options as far as attack is concerned, with Florian Neuhaus, Mahmoud Dahoud and Nadiem Amiri being options in midfield. 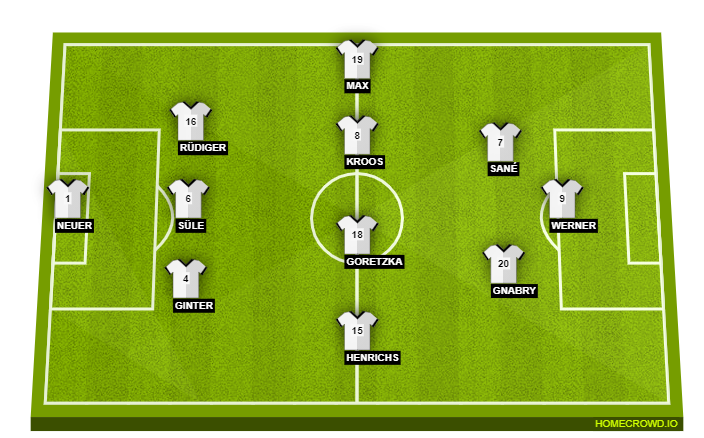 There has been a lot of movement around Ukraine’s squad as well, with a number of players left out after testing positive for the coronavirus. The most notable absentee for the visitors, though, is veteran forward Yevhen Konoplyanka, who has been omitted.

Andriy Pyatov, like his counterpart in Germany’s goal, will be the captain, and the final result will hinge a great deal on how he performs between the sticks. In front of Pyatov, Ukraine will line up in a 4-3-3 formation that Andriy Shevchenko has used quite extensively.

Yukhym Konoplya and Eduard Sobol will likely be the full-back pairing, with the duo providing width higher up the pitch. At the heart of Ukraine’s defence, there is no looking past Mykola Matviyenko and Serhiy Kryvtsov.

Up ahead in midfield, all eyes will be on Oleksandr Zinchenko, who has revelled in his role in the middle of the park in national colours. Zinchenko should be joined by Taras Stepanenko and Ruslan Malinovskyi in the three-man midfield unit, with the former sitting at the base while the latter will look to take up advanced positions on transitions.

Finally, in attack, Junior Moraes is expected to lead the line for Ukraine against Germany. Vice-captain Andriy Yarmolenko and Oleksandr Zubkov ought to be the two wide men, leaving Roman Yaremchuk, Marlos and Viktor Kovalenko as backup options. 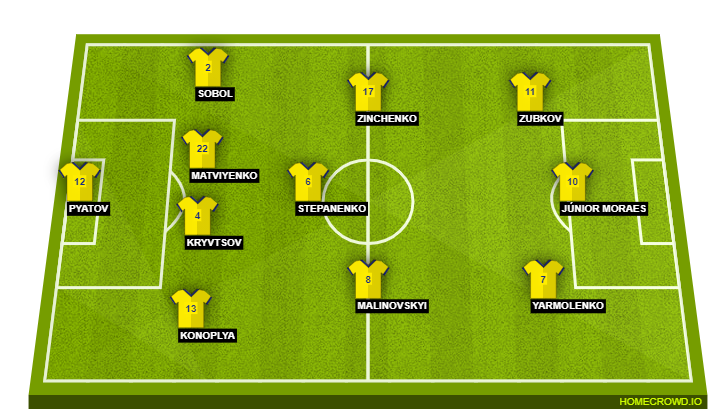 Rudiger has a point to prove. (Photo by Patrik Stollarz/AFP/Getty Images)

As Germany prepare for UEFA Nations League action again, Antonio Rudiger finds himself in a bizarre position. He is barely featuring for Chelsea in the matchday squads, let alone take the field in some capacity. In national colours, though, the 27-year-old has been backed by Joachim Low, and tends to shine as a result.

On Saturday, Rudiger will surely have a point to prove, hoping to put in a solid display in order to make a case for him to add to his only appearance of the season last month. Will Rudiger provide a solid presence at the back for Germany, or will Ukraine add to his woes?

This is a match in which there is hardly any room for errors. With Spain facing a tricky test against Switzerland on the same night, both Germany and Ukraine will know that three points will be as good as gold dust. Having said that, the hosts are in a better state after resting their regulars earlier this week and that should ultimately enable them to a comfortable 2-0 win in Leipzig.