Real Madrid will aim to keep their unbeaten run going when they take on Valencia at the Mestalla on Sunday to round off Matchday 9 in La Liga.

The dreaded international break is nearly upon us, with just a few more games left to be played in every league. Matchday 9 of the 2020/21 La Liga season will be completed at the Mestalla on Sunday, as Valencia play hosts to reigning champions Real Madrid, with both teams eager for all three points.

Valencia are a club in shambles at the moment, as the problems off the field continue to mount. After a summer that saw the squad being ripped apart, Los Che are in all sorts of trouble, with Javi Gracia only in his job due to a contractual obligation. After their first eight La Liga games, Valencia are 15th on the table, just two points clear of 18th-placed Huesca.

Real Madrid, on the other hand, are in the upper echelons of the La Liga standings even if they have not quite been in top gear in the early stages of the season. Even so, Los Blancos have dropped points just twice so far this term in the league and come into this game on the back of a 3-2 win over Inter Milan in the UEFA Champions League.

The corresponding fixture last season ended in a 1-1 draw, as Karim Benzema rescued a point for Real Madrid after Carlos Soler had handed Valencia the lead midway through the second half. Ahead of the latest meeting between the two sides, The Hard Tackle takes a closer look at the encounter.

Jasper Cillessen misses out due to injury. (Photo by Gonzalo Arroyo Moreno/Getty Images)

Javi Gracia does not have many pressing roster issues hampering his preparations ahead of the visit of Real Madrid. However, on Sunday, the Valencia manager will still be missing the services of a few key players due to injuries and suspension.

The major absentees for Valencia are Mouctar Diakhaby (hamstring) and Jasper Cillessen (muscle injury), with the duo likely to return post the international break. Apart from the aforementioned players, Gracia will also have to make do without Thierry Correia, who is suspended after being sent off last week against Getafe.

Correia’s absence could force Gracia to deploy Daniel Wass as the right-back, meaning a spot in the midfield opens up. Wass will join Jose Gaya, Hugo Guillamon and Gabriel in the backline, which will protect Jaume Domenech in the Valencia goal.

Up ahead in midfield, Uros Racic is the only option at Gracia’s disposal to be Soler’s partner in the middle of the park, with the Serb likely to be tasked with keeping a lid on Toni Kroos. Out wide, the impressive young midfielder Yunus Musah will be the X-Factor for Valencia, with Denis Cheryshev starting on the left flank.

Finally, in attack, Maximiliano Gomez is a certainty, but it is unclear who his strike partner will be. Goncalo Guedes might just get the nod over Kevin Gameiro and Kang-in Lee to line up alongside Gomez in the final third, with the Portuguese international charged with bringing the Real Madrid centre-backs out of position, so that Gomez can exploit the pockets of spaces created. 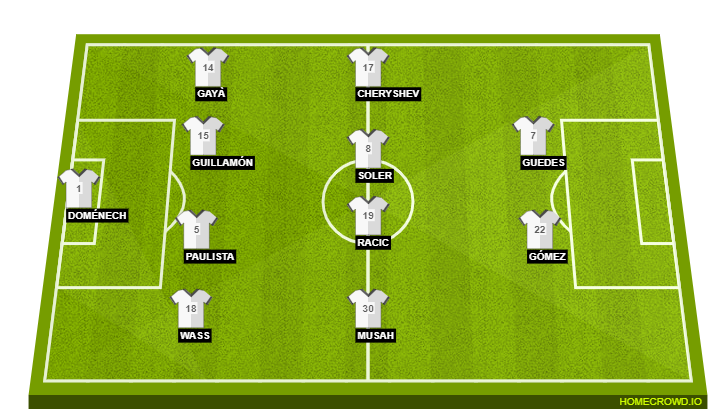 Zinedine Zidane has been handed a double blow ahead of his side’s trip to the Mestalla to take on Valencia. Casemiro and Eden Hazard are unavailable for Real Madrid after testing positive for the coronavirus, with the duo joining Eder Militao to be forced into isolation due to COVID-19.

Apart from the trio, Zidane is also bereft of the services of Dani Carvajal (knee), Alvaro Odriozola (calf) and Nacho (thigh). In their continued absence, the Real Madrid manager has no choice but to continue with Lucas Vazquez as the makeshift right-back, although the Spaniard has done a decent enough job in the position.

In fact, the entire Real Madrid defensive line picks itself, as Sergio Ramos and Raphael Varane are the only two fit centre-backs, while Ferland Mendy ought to start at left-back ahead of Marcelo again. Thibaut Courtois is the obvious pick in goal.

Up ahead in midfield, Luka Modric ought to come in for the unavailable Casemiro, with Federico Valverde and Toni Kroos being his partners in the middle of the park. Martin Odegaard is a part of the travelling squad as well, but Zidane is likely to ease him back into action following his recovery from a calf injury.

Karim Benzema was the star of the show against Inter Milan earlier this week and the star striker will lead the line for Real Madrid once again. Against Valencia, he is likely to be flanked by Brazilian prodigies Viniciur Jr. and Rodrygo Goes, both of whom impressed off the bench versus Inter, with Marco Asensio dropping to the bench after a sub-par midweek display. 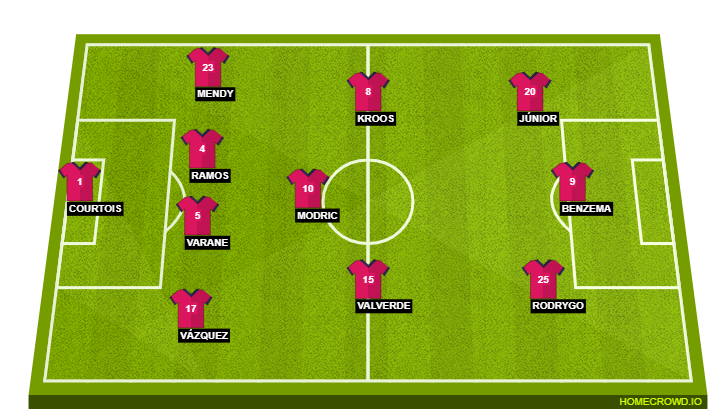 After being a part of a contentious moment also involving Karim Benzema, Vinicius Jr. has hit back well, letting his performance do the talking. Appearing off the bench in each of the last two games, the young Brazilian has shown that he has the fighting spirit to overcome the mental barriers, admitting to the same in a recent interview.

With Eden Hazard now unavailable after testing positive for the coronavirus, this is the opportunity that Vinicius needed to regain his place in the side, especially with Marco Asensio not necessarily firing on all cylinders.

If he can manage to lend the right kind of support to Karim Benzema against a struggling Valencia side, Real Madrid could be in for a straightforward evening at the Mestalla. At the same time, the prodigious Brazilian might have boosted his prospects as well. A big game for young Vinicius Jr.

Make no mistake about it. Valencia, despite all their problems, have what it takes to give Real Madrid a run for their money. However, the Merengues are building momentum at just the right time, with fixtures starting to pile up.

With only three teams having a worse defensive record than Valencia, the hosts will definitely be fancying their chances. The objective will also be to keep a rare clean sheet and this might finally be the game where Thibaut Courtois keeps an elusive shut-out for the first time in over a month. The Hard Tackle, therefore, predicts a 2-0 win for Real Madrid, with Vinicius Jr. making an impact.