Manchester United will be eager to bounce back to winning ways when they take on Everton at Goodison Park on Saturday.

Club football is set to take a break following this weekend for the final international break of 2020. Before that, Gameweek 8 of the 2020/21 Premier League season will be played out with Saturday’s proceedings beginning with the lunch-time kick-off at Goodison Park, as Everton play hosts to Manchester United.

Everton were on a roll in the first month of the new campaign, winning each of their first four Premier League games, in addition to their opening three fixtures in the EFL Cup. However, the Toffees have failed to win their last three games, including back-to-back losses in the two matches leading up this weekend’s clash with Manchester United.

Manchester United, too, come into this game on the back of successive defeats, which have sapped all the momentum they would have tried to build from the 5-0 thrashing of RB Leipzig. The Red Devils, who have been the epitome of inconsistency this season, were particularly dreadful against Istanbul Basaksehir, and Ole Gunnar Solskjaer & co. will be desperate for a quick turnaround.

The corresponding fixture last season ended in a 1-1 draw, with Dominic Calvert-Lewin giving Everton an early lead before Bruno Fernandes salvaged a point for Manchester United. Ahead of the latest meeting between the two sides, The Hard Tackle takes a closer look at the encounter.

Seamus Coleman is fit and available to take on Manchester United. (Photo by Oli Scarff/AFP/Getty Images)

Carlo Ancelotti has been handed a major boost on the team news front ahead of the visit of Manchester United. On Saturday, the Everton manager is set to welcome back four first-team players, leaving just two other players on the sidelines due to injuries.

The big news is that James Rodriguez is fit again after missing last weekend’s 2-1 loss at Newcastle United with a knock. Ancelotti confirmed the positive news for Everton during his pre-match press conference, while also revealing that both Mason Holgate and Seamus Coleman are available as well. In addition, Lucas Digne will also return after serving his suspension last weekend.

The major absentee, though, for Everton will be Richarlison, who will face the last of his three-match ban against Manchester United. Apart from the Brazilian, Ancelotti will also be unable to call upon Fabian Delph and Jean-Philippe Gbamin on Saturday.

Digne and the fit-again Coleman will most certainly comprise the full-back pairing, with Yerry Mina and Manchester United academy graduate Michael Keane partnering up at the heart of the Everton defence. In goal, Jordan Pickford will return after being left out last week at Newcastle.

Everton are likely to line up in Ancelotti’s trademark Christmas Tree formation – the 4-3-2-1 – and the three central midfielders ought to be Allan, Abdoulaye Doucoure and Andre Gomes. Allan will sit at the base and provide cover to the defence while Doucoure and Gomes will be the workhorses in the middle of the park, roving up and down the pitch, as required.

Gylfi Sigurdsson and James Rodriguez will provide the creative impetus, taking up more central positions higher up the pitch, with the full-backs providing the width in the final third. The two will also be on set-piece duties. Finally, Dominic Calvert-Lewin will lead the line for Everton against Manchester United, hoping to continue his fine run of form. 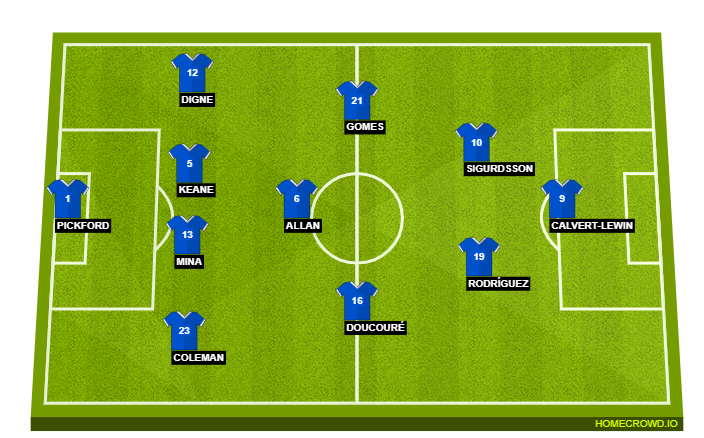 Much like his counterpart in the Everton dugout, Ole Gunnar Solskjaer has been handed a boost ahead of the visit to Goodison Park. On Saturday, the Manchester United boss will be able to call upon the services of Anthony Martial in a Premier League game for the first time since the end of the previous international break.

Martial is likely to spearhead the Manchester United attack, with the visitors expected to line up in a 4-2-3-1 formation. Jesse Lingard and Eric Bailly, though, remain on the treatment tables, with the duo likely to return post the latest international break. Solskjaer is also sweating over the fitness of Victor Lindelof.

As per the Manchester United manager, Lindelof is likely to face a late fitness test to determine his availability and could hence, miss out against Everton. However, there is some more good news, as Alex Telles has recovered from the coronavirus and has trained with the squad ahead of the game this weekend.

Telles, though, is only likely to be on the bench, with Luke Shaw starting on the left side of the Manchester United defence. On the right flank, Aaron Wan-Bissaka ought to start again, with Axel Tuanzebe expected to form the central defensive partnership with Harry Maguire if Lindelof misses out.

Meanwhile, David de Gea should return between the sticks after Dean Henderson started in the UEFA Champions League tie at Istanbul Basaksehir earlier this week. Up ahead in midfield, Fred and Scott McTominay should be recalled in order to restore the double pivot that worked well in the positive results. Paul Pogba, who has come under scrutiny lately, misses out again.

Finally, in attack, Marcus Rashford and Mason Greenwood will likely be the two wide men, with Bruno Fernandes hoping to pull the strings in the final third. And, as iterated earlier, Martial will be the central striker, with Edinson Cavani an option off the bench again. 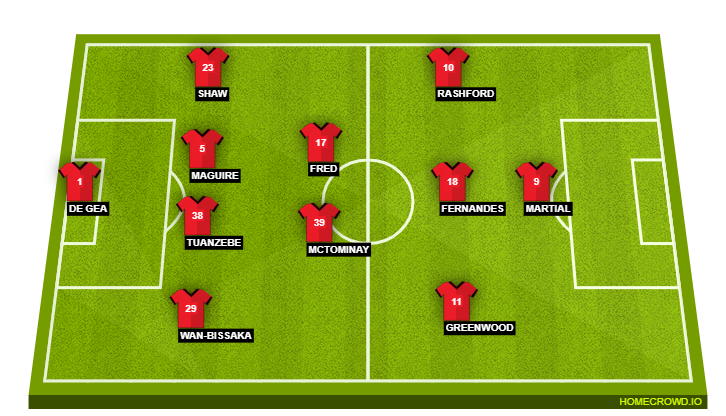 Fans expect a lot more from Martial than he has been able to show so far this season in Manchester United colours. (Photo by Laurence Griffiths/Getty Images)

Yet to properly get into his stride this season, Anthony Martial has made a rather underwhelming start to the campaign. The Frenchman has only scored one goal from open play, although it came in Manchester United’s most recent fixture.

Missing from the scene in the last three games as he served out his suspension, Manchester United do seem to lack his penetrative movement upfront. Having said that, Martial has been quite suspect in his hold-up play, something he will need to improve if he is to torment Everton.

His link-up with Bruno Fernandes was a stuff of delight in the second half of the 2020/21 season and Martial would hope that he can reunite with the Portuguese in explosive fashion. Can Martial rediscover his best touch against Everton on Saturday?

This one is a little tricky to predict. Everton have been one of the surprise packages in the early stages of the season but have faded dramatically in the last couple of games. Manchester United, on the other hand, have just struggled to string together a run of good results so far this season, something they will be desperate to set right as soon as possible.

Everton have not kept a clean sheet in any of their last seven Premier League home games and have conceded at least twice in each of their last four league games at Goodison Park. Such a record might fill Manchester United in with a lot of confidence. Having said that, their own defensive shortcomings will surely keep Everton in the game, which is why we predict a 2-2 draw.