Borussia Dortmund will host Bayern Munich in Der Klassiker at the Signal Iduna Park on Saturday, with top spot on the Bundesliga table on the line.

The final international break of the year is upon us. Before that, though, there are some big matches to be played. And, it does not get any bigger than Der Klassiker, as Borussia Dortmund get set to play hosts to Bayern Munich in a top-of-the-table clash at the Signal Iduna Park on Saturday.

Borussia Dortmund were a little slow off the blocks at the onset of their 2020/21 campaign. Lucien Favre & co. lost two of their first three games this season but have since turned their form around spectacularly. In this period, Die Schwarzgelben have shored up the defence and boast the best defensive record in the Bundesliga as well.

Bayern Munich, on the other hand, have lost just one game so far this season and have, more often than not, been in menacing touch in the final third. The reigning Bundesliga champions have won each of their last eight games in all competitions, with their latest success coming in the form of a 6-2 trouncing of Red Bull Salzburg in the UEFA Champions League earlier this week.

Borussia Dortmund and Bayern Munich have already locked horns once this season, with Hansi Flick’s men clinching the DFL Supercup with a narrow 3-2 win last month. Ahead of the latest meeting between the two sides, The Hard Tackle takes a closer look at the encounter.

Mats Hummels is scrambling to recover in time from a hamstring injury. (Photo by Odd Andersen/AFP via Getty Images)

Lucien Favre has a number of injury concerns hampering his preparations ahead of the visit of Bayern Munich. On Saturday, the Borussia Dortmund manager could be bereft of the services of as many as three first-team players.

While Marcel Schmelzer and Dan-Axel Zagadou are unavailable due to their respective knee injuries, the big concern surrounds Mats Hummels. The former Bayern Munich star is struggling with a hamstring issue he picked up last week and missed the midweek Champions League game against Club Brugge.

Reports suggest that Hummels is doing individual training, but a decision on his involvement versus Bayern Munich will likely be taken on the day of the game. If Hummels is indeed available, he will slot straight into the heart of the Borussia Dortmund defence, with Manuel Akanji being his partner. If not, then Axel Witsel might start as a makeshift centre-back once again.

Out wide, there is no looking past Thomas Meunier and Raphael Guerreiro as the full-back pairing, while Roman Burki will likely be stationed in goal, with Dortmund expected to line up in a 4-2-3-1 formation, as they have in recent games. Up ahead in midfield, Thomas Delaney will have Jude Bellingham for company in all likelihood, if Witsel plays as the centre-back again.

Marco Reus and Jadon Sancho are expected to return to the starting lineup, with Reus reprising the no. 10 role while Sancho and Thorgan Hazard should be the two wide men, as Giovanni Reyna misses out. Upfront, Erling Haaland picks himself as the central striker. 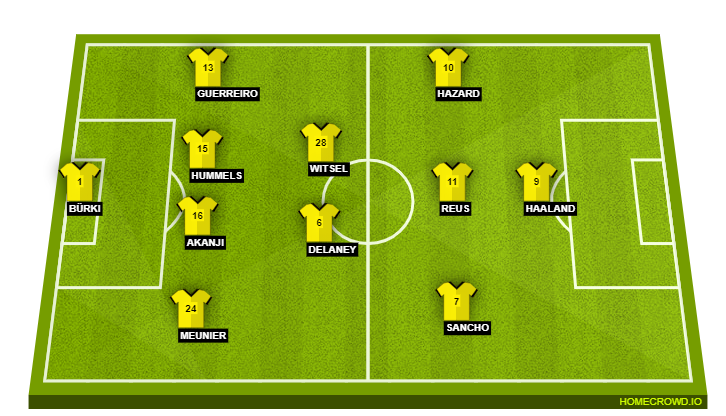 Much like his counterpart in the Borussia Dortmund dugout, Hansi Flick has a myriad of issues to cater to in his squad. On Saturday, the Bayern Munich manager will be without four first-team players due to injuries and other issues.

Alphonso Davies is out for the rest of November at the very least due to an ankle injury while Niklas Sule is isolating as part of his recovery from the coronavirus. Also unavailable due to COVID-19 infection is Joshua Zirkzee while Leon Goretzka is another major absentee due to a calf injury.

In the absence of Davies, Lucas Hernandez will be the resident left-back for Bayern Munich while Benjamin Pavard is a certainty on the right flank. With hardly any centre-backs available, Jerome Boateng and David Alaba, whose future at Bayern Munich is uncertain, will form the central defensive partnership. Manuel Neuer is the obvious pick in goal.

Up ahead in midfield, Corentin Tolisso will start alongside Joshua Kimmich in the double pivot once again, with Goretzka out injured. In attack, Roberto Lewandowski, Thomas Muller and Serge Gnabry are all certain starters. As for the fourth and final spot, Leroy Sane is expected to pip Kingsley Coman to the left wing berth. 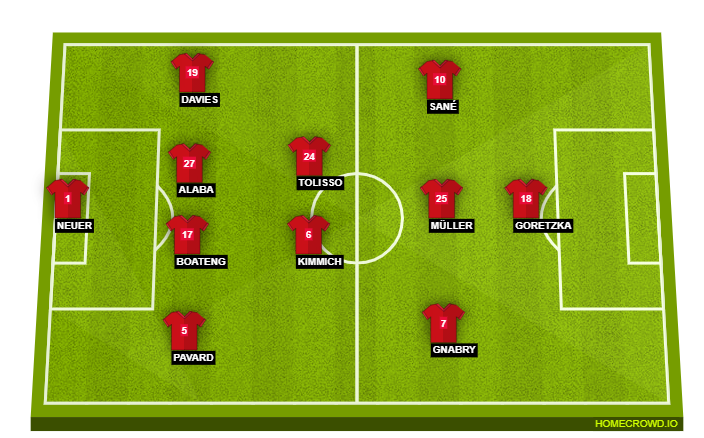 All eyes will invariably be on Robert Lewandowski, who has practically been unstoppable across all competitions this season. However, if Borussia Dortmund are to take anything from Der Klassiker, it is Erling Haaland who will need to be produce a performance similar to the one against Club Brugge earlier this week.

The Norwegian wonderkid has not quite set the stage alight as well as he had done last season. However, his tally of five goals is still not half bad and Haaland will be eager to make the game against Bayern Munich count. Will the prodigious striker come to the party on Saturday?

There are a lot of variables as far as Der Klassiker is concerned. With Mats Hummels’s involvement not certain, Borussia Dortmund are not preparing for the game in the best possible way. Bayern Munich, on the other hand, are missing the services of key players as well.

The spotlight will most certainly be on the two strikers Erling Haaland and Robert Lewandowski, who will hope to find the back of the net on Saturday. However, the final result will is likely to hinge on whether Hummels is available. The Hard Tackle predicts a 1-1 draw, provided the former Bayern Munich defender starts, although the visitors could win if the veteran misses out.