Tottenham will look to get their European campaign back on track when they travel to Bulgaria to face Ludogorets in the UEFA Europa League.

Tottenham would look to bounce back from their unexpected loss to Antwerp last week. The fact that Ludogorets are yet to win in the Europa League would serve as a boost for Spurs.

The shock defeat against the Belgian side put things into perspective for Jose Mourinho, who said after the match that the loss allowed him to learn more about his team and the planning to do in future. Surely, Mourinho would not rotate as much as expected against Ludogorets.

Ludogorets currently sit atop the Parva Liga and would like their domestic form to rub off on their European record, as they are yet to open their account in the Europa League. Pavel Vrba and his men will really have their work cut out. The Hard Tackle now takes a closer look at the encounter.

Stanislav Genchev: It is an honor for me to compete with Mourinho https://t.co/D01tDeVeEv #ludogorets pic.twitter.com/QyeZc98lyp

Ludogorets might be feeling a little hard done by the recent results in the Europa League as they narrowly lost 2-1 and 4-3 in the first two matches of the group stage. However, some positives can be taken from their performances.

Ludogorets are lucky to not have many notable absentees in the midst of a worldwide crisis and a fixture pile-up. Wanderson Campos and Higinio Martin are both reportedly out for the remainder of the year.

The Bulgarian outfit tend to be over reliant on their main man Elvis Manu. Manu scored all three goals in the loss to LASK and he will play an important role if Ludogorets are to dismantle Tottenham’s rather stable backline.

Dominik Yankov was played on the left wing last week and could reprise the same role once again, and will drop back into midfield on turnovers. In the defensive phase, the onus will be on Stephane Badji and Alex Santana will shore things up from midfield, while Olivier Verdon and Cosmin Moti will hope to remain compact against a tricky Tottenham attack.

Tottenham have a few injury concerns coming into this clash. Sergio Reugilon is down with sickness, but Jose confirmed that it is not COVID-19. Erik Lamela and Serge Aurier are also down with a knock and have not travelled with the squad.

Gareth Bale will surely start the game against Ludogorets as Mourinho hopes to bring the best out of the Welshman. The Tottenham boss would look to make sure that his team steps onto the field with a winning mentality for any lapse in concentration could prove to be costly for Spurs in the long run.

How Pierre-Emile Hojbjerg has given Spurs the backbone that Jose Mourinho’s most successful teams need | @jj_bull https://t.co/m5A3tphaaP

It is unlikely for Dele Alli to get a start after last week’s performance and Tottenham are likely to play with a three-man midfield versus Ludogorets. Giovani Lo Celso could earn a start as he looks to regain match fitness, while the impressive Pierre-Emile Hojbjerg could start yet another game.

In the absence of Reguilon, Ben Davies would return while Matt Dohert continues as the right-back. New signing Joe Rodon is unregistered in the Europa League squad, so Toby Alderweireld partners Davinson Sanchez at the heart of the Tottenham defence. Lastly, Joe Hart should return to the starting lineup as well, taking his place between the sticks. 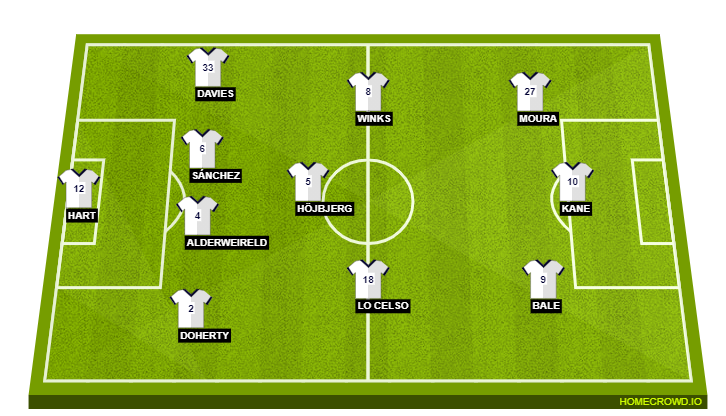 The Welshman’s return to Tottenham has been one of the season’s feel good stories, but despite all the emotions, Bale will have to perform to keep his spot in the first team. Bale scored the winner for the Lilywhites versus Brighton, and the goal must have given him a load of confidence. The strike should only make Bale strive for further and get better and better.

Last time in the Europa League, Bale got subbed off at half-time after a dismal performance. On Thursday night, a response from Bale should be expected by Jose Mourinho as Tottenham try to get back to winning ways in Europe.

Tottenham have been pretty solid in the past few games and they are expected to continue their solid run and keep a clean sheet. As far as scoring goals is concerned, Tottenham should not struggle in that area either as long as Harry Kane is on the pitch or Gareth Bale is able to find his feet. It will be a really interesting game, but Tottenham are likely to coast to a win.