Manchester United will hope to take a step closer to qualifying for the Champions League Round of 16 when they face Istanbul Basaksehir on Wednesday.

The curtains will fall on Matchday 3 of the Group Stage in the 2020/21 UEFA Champions League on Wednesday, with eight matches on show. Manchester United will be one of the teams taking to the field when they lock horns with Istanbul Basaksehir at the Fatih Terim Stadium.

Both sides have made a slow start to the season, as far as domestic football is concerned. While Istanbul Basaksehir are currently seventh on the Turkish Super Lig table after winning just three of their opening seven games, Manchester United are languishing at 15th in the Premier League standings, having managed just two wins in six matches thus far.

As far as the Champions League is concerned, Manchester United have fared much better, kicking off their European journey with a shock win over PSG before trouncing RB Leipzig 5-0 last week. Istanbul Basaksehir, though, are rock-bottom in Group H after losing each of their first two games.

Wednesday’s fixture will see Istanbul Basaksehir and Manchester United face off against each other for the very first time and ahead of the maiden meeting between the two sides, The Hard Tackle takes a closer look at the encounter.

Okan Buruk has a plethora of injury troubles hampering his preparations ahead of the visit of Manchester United. On Wednesday, the Istanbul Basaksehir manager could be without as many as five first-team players due to various fitness issues.

The likes of Okechukwu Azubuike, Nacer Chadli, Enzo Crivelli and captain Mahmut Tekdemir, are all unavailable to take on Manchester United. Istanbul Basaksehir, though, have a lot of experienced heads in the squad and Buruk would hope some of them shine through on Wednesday.

The hosts ought to line up in a 4-3-3 formation, with Mert Gunok taking his place in goal. In front of him, Martin Skrtel will be the key man for Istanbul Basaksehir, pairing up with Alexandru Epureanu at the heart of the defence. Boli Bolingoli and former Manchester United man Rafael will likely be the full-back duo.

Up ahead in midfield, Mehmet Topal will have a lot of responsibility on his shoulders in the absence of captain Mahmut Tekdemir. Topal will sit at the base of the three-man midfield, with Irfan Can Kahveci and Berkay Ozcan providing defensive support while looking to provide the forward thrust on transitions.

Finally, in attack, the onus will be on Demba Ba to produce the goods and put the Manchester United defence under pressure. The former Chelsea striker will be supported from the wings by Deniz Turuc and Edin Visca. 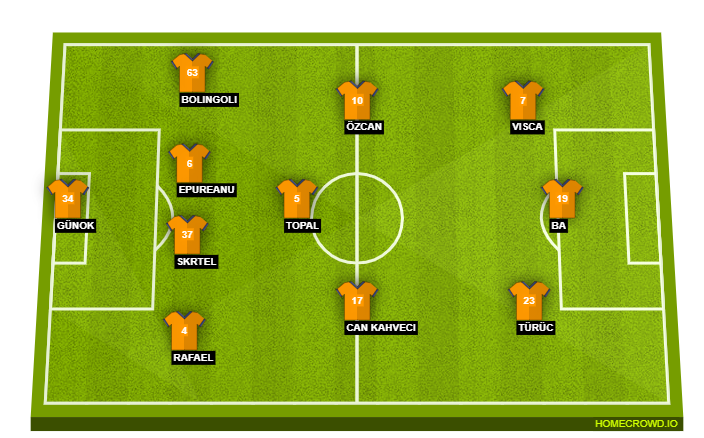 Ole Gunnar Solskjaer does not have any fresh roster issues to contend with ahead of the trip to Istanbul. Against Istanbul Basaksehir on Wednesday, the Manchester United boss will continue to be bereft of the services of three first-team players, with the manager having plenty in his squad to cover for those absences.

Jesse Lingard and Eric Bailly continue to be on the treatment tables while Alex Telles is still recovering from COVID-19 and has missed out on the Manchester United travelling squad. There is a sense that Solskjaer could perhaps, make some rotations against Istanbul Basaksehir to deal with a cramped schedule.

However, bar one or two minor shuffles, the Manchester United manager should name a strong starting lineup on Wednesday. In goal, there is no looking past David de Gea, who has hardly put a foot wrong lately. In front of him, the visitors will line up in a 4-2-3-1 formation, with the midfield diamond experiment ending for now.

The player whose position is directly affected as a result is Paul Pogba. The Frenchman was a mess against Arsenal and has been subject to criticism of late. In his stead, Anthony Martial will come into the lineup, leading the line for Manchester United. Marcus Rashford and Mason Greenwood ought to be the two wide men, with Edinson Cavani yet again being an option off the bench.

As for the midfield, Bruno Fernandes is a certainty in the no. 10 role. However, Scott McTominay could make way for Donny van de Beek, who will get a chance to impress in the middle of the park, with Nemanja Matic being the holding midfielder in place of Fred, who is in need of a breather.

The final change to the starting lineup will likely see Axel Tuanzebe getting a chance to impress in place of Victor Lindelof. Tuanzebe will pair up with Harry Maguire at the heart of the Manchester United defence, with Aaron Wan-Bissaka and Luke Shaw being the two wide men.

Fans expect a lot more from Martial than he has been able to show so far this season in Manchester United colours. (Photo by Laurence Griffiths/Getty Images)

Marcus Rashford has shown a semblance of good form in the past month or so. Bruno Fernandes has been picking up pace as well, while Mason Greenwood is rediscovering his goalscoring touch. One player, though, who needs to step up now more than ever is Anthony Martial.

The French international had ended 2019/20 on a high, finishing the campaign as Manchester United’s top scorer for the campaign. However, he is yet to score a goal from open play so far this term and the game against an uninspiring Istanbul Basaksehir side is just the outing for him to get back to his prolific ways. Will Martial rediscover his best?

Manchester United have been the epitome of inconsistency in 2020/21, but have been remarkably formidable in the UEFA Champions League, despite regularly failing to deliver in the Premier League. Istanbul Basaksehir, on the other hand, are yet to even find the back of the net in Europe this season, let alone grab a point.

With the hosts’ attacking unit looking rather toothless, the Manchester United defence could be in for an easy evening, while the attack might find a way to flourish. With that in mind, The Hard Tackle predicts a 2-0 win for Ole Gunnar Solskjaer & co. with Anthony Martial being on target.