Real Madrid will welcome Inter Milan to the Alfredo Di Stefano Stadium in a UEFA Champions League Group B tie, with both sides in desperate need for a win.

The hectic schedule continues with yet another midweek round of fixtures, with Matchday 3 of the UEFA Champions League Group Stage kicking off on Tuesday. The big game on the day will be played at the Alfredo Di Stefano Stadium, where Real Madrid will play hosts to Inter Milan eager to grab all three points.

Real Madrid have blown hot and cold in the first couple of months of the 2020/21 season. Zinedine Zidane & co. are currently second in La Liga, but have been rather underwhelming in the UEFA Champions League to say the least. Los Blancos have just one point after two games and are rock-bottom in a tight Group B, where competition for places is intense in these early days.

Inter Milan, too, have been quite sub-par in the Champions League so far, playing out successive draws to start their European campaign this season. The Nerazzurri have not fared significantly better in domestic football either, managing just three wins from their opening six games. One such winless result came this past weekend, as only a late Ivan Perisic goal rescued a point versus Parma.

Real Madrid are hosting Inter Milan in the Champions League for the first time since September 1998, when a fine second-half showing earned them a 2-0 win. Ahead of the latest meeting between the two sides, The Hard Tackle takes a closer look at the encounter.

Eder Militao is the latest player to be sidelined for Real Madrid. (Photo by Christophe Archambault/AFP/Getty Images)

The roster issues just continue to worsen for Zinedine Zidane with each passing game. Ahead of the visit of Inter Milan on Tuesday, the Real Madrid manager has as many as five first-team players on the sidelines due to injuries and other problems.

In particular, the troubles in defence continue to mount, with Eder Militao the latest player to be rendered unavailable after testing positive for the coronavirus. Apart from the Brazilian, the likes of Dani Carvajal (knee), Nacho (thigh), Alvaro Odriozola (calf) and Martin Odegaard (calf) all remain out.

The continued absence of Carvajal and Odriozola means Lucas Vazquez will once again be the makeshift right-back for Real Madrid. On the opposite flank, Ferland Mendy is expected to return to shore up the defensive side of things. Sergio Ramos and Raphael Varane will form the central defensive pairing while Thibaut Courtois is the obvious pick in goal.

Up ahead in midfield, a solitary change is expected, with Toni Kroos coming in for Federico Valverde. Kroos, along with Luka Modric, will be in charge of providing the creative impetus whilst supporting Casemiro during the defensive phase of the game as well.

In attack, no shuffles are expected, especially following a convincing showing by Eden Hazard this past weekend against Huesca. Hazard will provide company to Karim Benzema and Marco Asensio in the final third, with Vinicius Jr. and Rodrygo Goes being the backup options. 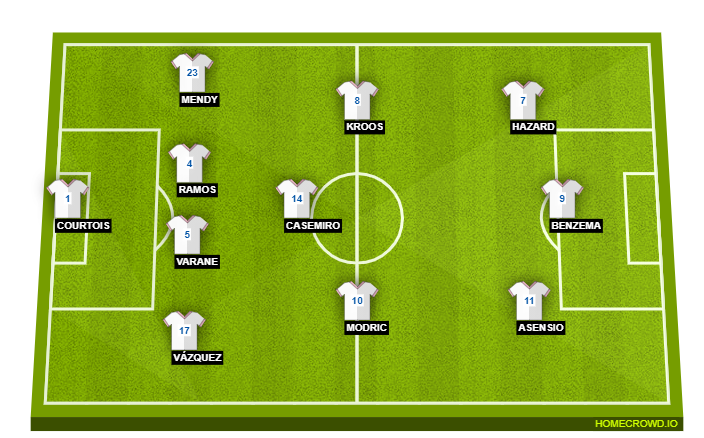 Antonio Conte does not have any fresh injury concerns hampering his preparations ahead of the trip to the Spanish capital. Against Real Madrid on Tuesday, the Inter Milan boss will be bereft of the services of just two first-team players.

However, Romelu Lukaku remains unavailable due to a thigh injury, in what is a huge blow for Inter Milan. The only other absentee is Stefano Sensi, who is recovering from a thigh injury as well. However, there is some good news for the visitors as well, with Alexis Sanchez in contention to start against Real Madrid.

During his pre-match press conference, Conte revealed that Sanchez has indeed resumed training, but remained coy when asked if Sanchez would start. The Chilean forward, though, should be named in the starting lineup, pairing up with Lautaro Martinez in the strike partnership.

Sanchez’s mazy runs and off-the-ball work will be critical in opening up spaces around the Real Madrid defence, especially with the struggling Christian Eriksen unlikely to feature. In Eriksen’s absence, Inter Milan will be lining up in a 3-5-2 formation, with Arturo Vidal returning to add steel to the midfield.

Vidal will have Nicolo Barella and Marcelo Brozovic for company in the middle of the park, with Ashley Young and former Real Madrid man Achraf Hakimi being the wing-back pairing. At the back, Danilo D’Ambrosio and Alessandro Bastoni are expected to be recalled, with the duo starting alongside Stefan de Vrij in the back-three that will provide cover to captain Samir Handanovic. 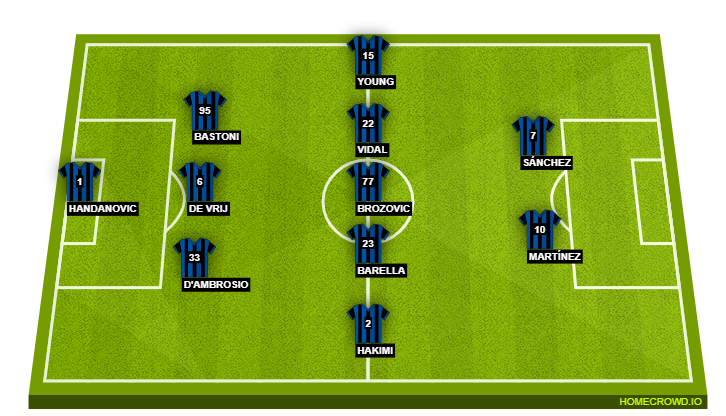 Will Sergio Ramos be at his best against Inter Milan? (Photo by Gabriel Bouys/AFP/Getty Images)

While attack has had its fair share of troubles this season so far, the output in the final third ought to improve with the return of Eden Hazard. It is defence, however, that is starting to become a bit of a concern. While the presence of Sergio Ramos is usually reassuring, injuries and other issues have deprived Real Madrid of stability at the back.

An Inter Milan side that thrives on getting their opponents bent out of shape could prove to be a major thorn on the sides of the Real Madrid defence. So, Sergio Ramos will need to be on top of his game if the hosts are to record their first Champions League win of the season. A tricky challenge awaits Ramos & co.

Real Madrid have made things very tricky for themselves in the UEFA Champions League after failing to win their first two games. However, Group B appears to be wide open, with Shakhtar Donetsk just three points – effectively one win – ahead of them. Inter Milan have similar issues, having struggled in the final third in Europe.

The absence of Romelu Lukaku only makes things tougher for the visitors, especially with Lautaro Martinez not quite being in his elements. With Eden Hazard and Karim Benzema showing good form in La Liga this past weekend, Real Madrid might just have enough to grab all three points. The Hard Tackle, therefore, predicts a 2-1 win for Zinedine Zidane & co. on Tuesday.