Tottenham will hope to keep their unbeaten run in the Premier League going when they take on Brighton & Hove Albion on Sunday.

Gameweek 7 of the 2020/21 Premier League season continues into its third day, with four matches on show on Sunday. The final game of the day will be played at the Tottenham Hotspur Stadium, where Brighton & Hove Albion will lock horns with Tottenham Hotspur.

Tottenham have been a team of two halves this season. While their attack has flourished, defence has had the tendency to undo all the good work. As a result, Spurs have managed to win just three of their six Premier League games so far, and are still waiting to record back-to-back wins in the division.

Brighton, on the other hand, have dazzled with their free-flowing style of football. However, an attack-oriented gameplay has piled on the pressure on the defence, which has in turn hampered the Seagulls from finishing off games. The same was prevalent in their 1-1 draw with West Bromwich Albion last weekend, with Graham Potter & co. finding themselves at 16th on the table.

The corresponding fixture last season ended in a come-from-behind 2-1 win for Tottenham after Adam Webster had handed Brighton a lead ahead of half-time; Harry Kane and Dele Alli were on target for Spurs. Ahead of the latest meeting between the two sides, The Hard Tackle takes a closer look at the encounter.

Jose Mourinho has a near-full strength squad at his disposal. (Photo by Catherine Ivill/Getty Images)

Jose Mourinho barely has any injury concerns hampering his preparations ahead of the visit of Brighton & Hove Albion. On Saturday, the Tottenham Hotspur boss will be bereft of the services of just one first-team player, with Japhet Tanganga recovering from a thigh injury.

Mourinho had rested Eric Dier and Tanguy Ndombele for the trip to Belgium to take on Royal Antwerp in the UEFA Europa League. The duo should be back in the thick of things against Brighton on Sunday, with both of them expected to start.

Dier ought to pair up with Toby Alderweireld at the heart of the Tottenham defence, with Sergio Reguilon and Matt Doherty likely to be the full-back pairing. In goal, there is no looking past captain Hugo Lloris, who will come in for Joe Hart.

Tottenham will line up in a 4-2-3-1 formation in front of Lloris and the onus will be on Pierre-Emile Hojbjerg to set a quick tempo during the hosts’ build-up play. Hojbjerg will have Moussa Sissoko for company in the double pivot, with the duo also tasked with cutting off the flow of Brighton’s moves.

Ndombele will be deployed in the advanced midfield role and the Frenchman will often look to test Brighton goalkeeper Mat Ryan from range. In attack, all eyes will invariably be on the magnificent duo of Harry Kane and Son Heung-min.

Kane and Son have been absolutely irresistible in the final third so far this season, combining for 9 goals just between themselves – the joint-most for Tottenham in a Premier League campaign. The final man in attack will be Lucas Moura, with Gareth Bale still not at his best. 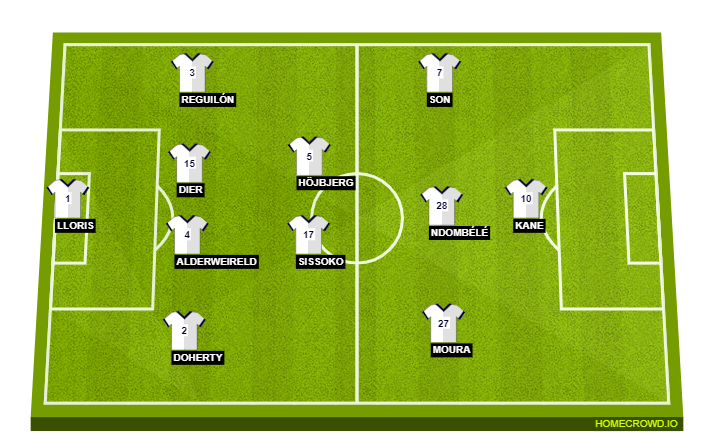 Unlike his counterpart in the Tottenham dugout, Graham Potter has a number of pressing roster issues to cater to ahead of the trip to the capital. On Sunday, the Brighton & Hove Albion manager could have to make do without as many as five first-team players.

The likes of Alireza Jahanbaksh (hamstring), Jose Izquierdo (knee) and Florin Andone (knee)are all certain to miss out. The big absentee for Brighton, though, will be captain Lewis Dunk, who serves the second of his three-match ban. Davy Propper is inching closer to his return from an Achilles injury but the match against Tottenham might just come too soon for him.

Brighton will line up in a 3-4-3 formation, with the frontline being a fluid trifecta that will see the players interchange positions regularly. Neal Maupay and Leandro Trossard pick themselves, but the two need to start becoming more prolific in front of goal. Maupay and Trossard will have Danny Welbeck for company, with the Englishman set to make his full Brighton debut.

In midfield, the onus will be on Adam Lallana to drive Brighton forward while providing defensive support to Yves Bissouma, who will also look to take aim at goal from time to time. Solly March and Tariq Lamptey are expected to be the two wing-backs, with the duo being a constant presence in the Tottenham half.

At the back, Adam Webster will need to lead by example, organising the defensive line, where he will have Dan Burn and Ben White as his partners. Finally, Mat Ryan will be stationed in goal, where he will be a busy man up against Harry Kane and Son Heung-min. 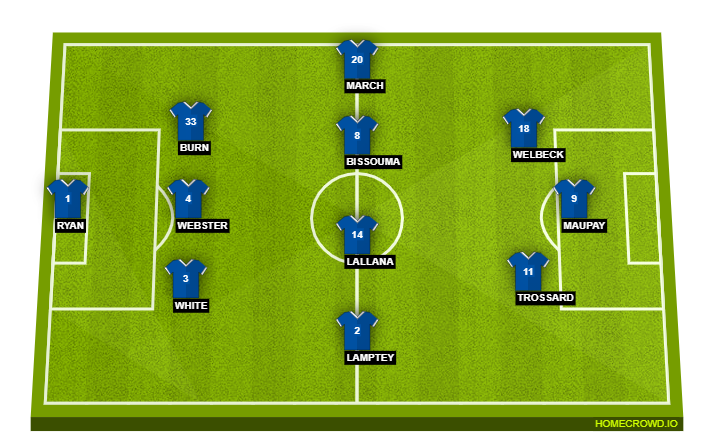 Will Jose Mourinho’s trusted lieutenant be on the money against Brighton? (Picture by Adrian Dennis/AFP/Getty Images)

What a fantastic start to the season it has been for Harry Kane. The England captain has been in a purple patch, constantly adding layers to the game, which is evident in the fact that he is perched atop the assists charts in the Premier League this term.

Now, though, the goalscoring itch in him might just be starting to appear, as he nears 150 Premier League goals. If Kane does reach the tally (he needs two strikes to do so), Kane would become the joint-second quickest player to the milestone in Premier League history (alongside Sergio Aguero).

The primary objective for Kane, though, will be getting over the line, enabling Tottenham to make winning a habit. So while he will be eager to find the back of the net, Kane will also look towards his partner Son Heung-min to make a definitive difference.

This one is going to be tricky for Tottenham. Yes, they have a menacing attack and Brighton do not quite look anything like solid at the back without Lewis Dunk. However, the visitors can catch Spurs on the break and considering their vulnerabilities at the back, Tottenham need to be wary.

Watch out for the Harry Kane-Son Heung-min show once again, though. The duo should set the stage alight in the end, although Brighton might find a way to breach the Tottenham defence as well. With all that in mind, The Hard Tackle predicts a 3-1 win for Jose Mourinho & co.