Chelsea will hope to build on their win in the UEFA Champions League this week when they take on Burnley at Turf Moor on Saturday.

The action just does not stop for teams across Europe, with games coming just about every single day of the week. In the Premier League, Gameweek 7 of the 2020/21 season has begun, with the action continuing on Saturday with three further matches. Chelsea are one of the teams that will be taking the field when they lock horns with Burnley at Turf Moor.

Burnley, one of four teams to make a belated start to the 2020/21 season, have been horrid at the onset of their Premier League campaign. The Clarets are still in search of their first win, having lost four of their first five games (D1). Sean Dyche’s men, though, seem to be slowly finding their feet at the back, although their form out front remains suspect.

Chelsea, on the other hand, have blown hot and cold in the early days of the season, managing to win just four of the ten games they have played so far across all competitions. Indeed, the Blues’ 4-0 hammering of Krasnodar in the UEFA Champions League earlier this week was their first victory in four attempts, having played out three successive draws prior to the win.

The corresponding fixture last season ended in a 4-2 win for Chelsea, with Christian Pulisic scoring a match-winning hat-trick. With the Blues in search of a semblance of consistency ahead of their latest meeting with Burnley, The Hard Tackle now takes a closer look at the encounter.

Sean Dyche has a number of pressing roster issues hampering his preparations ahead of the visit of Chelsea. On Saturday, the Burnley manager, who is already stretched for resources, will be bereft of the services of five first-team players.

While Phil Bardsley remains in isolation due to his ongoing recovery from the coronavirus, the likes of Ben Mee (hamstring), Erik Pieters (calf) and Jack Cork (ankle) are all still some way off making their way back from their respective injuries while Johann Berg Gudmundsson (calf) is a major doubt and could miss out against Chelsea.

The potential absence of Gudmundsson means Robbie Brady is a certain starter on the right side of the midfield quartet, and so are Ashley Westwood, Josh Brownhill and Dwight McNeil. McNeil, in particular, will have the spotlight on him, with the young winger carrying the bulk of Burnley’s threat in the final third.

Upfront, Chris Wood should pair up with Ashley Barnes in the strike partnership for the hosts, with Jay Rodriguez and Matej Vydra being the backup options. As for defence, the back four of Matt Lowton, Kevin Long, James Tarkowski and Charlie Taylor pick themselves, with Nick Pope the obvious pick between the sticks.

The objective for Burnley will invariably be to put men in behind the ball, just as they did against Tottenham Hotspur last weekend before their defence was finally breached. Similarly, the hosts will hope to frustrate the Chelsea attack, hoping to strike them on the counter with long balls. 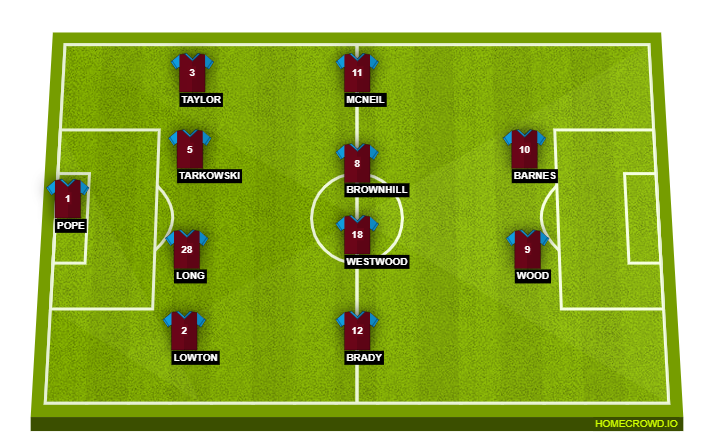 Frank Lampard does not have any fresh injury concerns to contend with ahead of his side’s latest fixture. Against Burnley on Saturday, the Chelsea manager will only be travelling without two first-team players, with Kepa Arrizabalaga (shoulder) and Billy Gilmour (knee) unavailable.

Neither player’s absence hurts Chelsea any which way, with Edouard Mendy the resounding first-choice goalkeeper for the Blues while the likes of Jorginho, Mateo Kovacic and N’Golo Kante are vying for the midfield spots.

Mendy should indeed retain his place between the sticks, hoping to keep a third successive clean sheet, something unheard of in the Frank Lampard era so far. In front of him, Chelsea ought to line up in a 4-2-3-1 formation, with Thiago Silva expected to return to the heart of the defence after being rested in the midweek Champions League fixture.

Silva will pair up with Kurt Zouma to form the central defensive partnership, while Reece James is likely to come in for Cesar Azpilicueta in the right-back slot. On the opposite flank, there is no displacing Ben Chilwell, who has made the left-back spot his own.

Up ahead in midfield, Jorginho might miss out, with Kovacic and Kante partnering up in the double pivot. Kovacic will often carry the ball forward to add to the numbers in order to heap pressure on the Burnley defence.

However, it is the attack that will have the spotlight on it on Saturday. For at long last, Lampard will be able to name his strongest attacking quartet. Hakim Ziyech was impressive in his first start for Chelsea and will retain his place on the right flank, while Christian Pulisic will come in on the left. Timo Werner will lead the line for Chelsea while Kai Havertz will play off him as the no. 10. 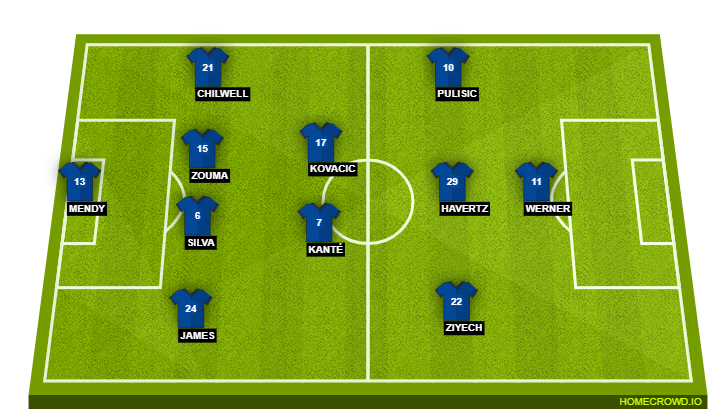 Will Pulisic embark on a hot streak once again versus Burnley? (Photo by Jan Kruger/Getty Images)

For a number of weeks now, Chelsea fans have been deprived of the sight the have yearned for quite some time. That is because Christian Pulisic and Hakim Ziyech were still on the sidelines when the season began. When Pulisic did return, he was a little slow off the blocks, still finding his feet in the new season.

However, in his fantastic cameo against Krasnodar earlier this week, the American forward showed that he is starting to rediscover his best touch. With Hakim Ziyech’s style complementing him, the time is perfect for Pulisic to shine. And, with the next game being against Burnley, the team he blasted with a hat-trick last season, Pulisic might just fancy a repeat at Turf Moor.

This is a match between two sides that are not performing at optimum levels. Burnley just cannot manage to find the back of the net at the moment, and Chelsea have had similar struggles in front of goal, albeit on a different scale. The display against Krasnodar, though, ought to be cause for optimism.

With the much-heralded front four finally set to start a game together, this might be a match in which Chelsea will get to show what their fans should look forward to. Bear in mind, the quartet might still be establishing the chemistry, meaning the game should not have a glut of goals.

Still, this is a game that Chelsea should win comfortably, with the Burnley defence likely to be breached eventually. With that in mind, The Hard Tackle predicts a 2-0 win for Frank Lampard & co. in a result that will see them garner some very important points.