Arsenal will hope to make it two wins in two in the UEFA Europa League when they welcome Dundalk to the Emirates on Thursday.

Matchday 2 of the group stages across the European competitions will be concluded this Thursday, with all 48 teams in the UEFA Europa League in action. Arsenal are one such team that will take the field, when they play hosts to Dundalk at the Emirates.

Arsenal’s form has slid considerably since a reasonably strong start to the season. The Gunners are hardly posing a threat going forward while starting to look a tad bit like their old vulnerable selves at the back. Mikel Arteta’s men have now lost three of their last six games and were also put under the cosh in their opening Europa League game before beating Rapid Wien 2-1 last week.

Dundalk, too, are going through a similarly patchy run of form, having managed to win just three of their last eight fixtures. In fact, the visitors have been on the wrong end of the result in each of their last two outings, including their first Europa League game of the season, against Molde last week.

Thursday’s fixture will be the first time when Arsenal will be locking horns with Dundalk. In fact, it will be the first ever instance of the Premier League heavyweights going up against Irish opposition in UEFA competition and ahead of the first meeting between the two sides, The Hard Tackle takes a closer look at the encounter.

David Luiz is the latest Arsenal centre-back to be sidelined with an injury. (Photo by Alex Burstow/Getty Images)

Mikel Arteta has a plethora of injury concerns hampering his prearations ahead of his side’s latest fixture. Against Dundalk on Thursday, the Arsenal manager will be bereft of the services of five first-team players.

While the figure might not be a hefty one, what is alarming is that Arteta will be unable to call upon the services of four centre-backs, with David Luiz joining Calum Chambers, Pablo Mari and Rob Holding on the sidelines. On top of that, Sokratis and William Saliba have been omitted from the Europa League squad and cannot be selected for Arsenal.

It is, therefore, certain that Shkodran Mustafi will make his first start of the season when Dundalk visit the Emirates, with Gabriel Magalhaes his partner at the heart of the Arsenal defence. Arteta is likely to make a raft of changes in the game, meaning Cedric Soares and Sead Kolasinac should be the full-back pairing for the hosts, with Runar Alex Runarsson finally making his Arsenal debut.

Up ahead in midfield, Dani Ceballos is likely to be retained in the starting lineup in order to provide some creative impetus from the middle of the park. Ceballos will likely have Mohamed Elneny and Joe Willock for company in the three-man midfield, with Thomas Partey and Granit Xhaka being rested.

Finally, in attack, the onus will be on Nicolas Pepe to deliver the goods, with the Ivorian expected to be surrounded by two youngsters in Eddie Nketiah and Reiss Nelson. Both Nelson and Nketiah will have the chance to make a case for more regular inclusion, with the likes of Pepe, Willian and Alexandre Lacazette struggling to perform consistently.

Unlike his counterpart in the Arsenal dugout, Filippo Giovagnoli does not have many fitness issues to contend with ahead of his side’s trip to the Emirates. On Thursday, the Dundalk manager is only likely to be without two first-team players.

Dane Massey continues to struggle with his hip injury and is a certainty to miss out. However, Nathan Oduwa might be able to make the bench if he manages to recover sufficiently from his hamstring complaint.

Giovagnoli is likely to line his side up in a 4-2-3-1 formation once again, having used a 4-1-4-1 last time out in the Europa League against Molde. In goal, Gary Rogers is expected to return, replacing Aaron McCarey. Rogers will be protected by a back four featuring Sean Gannon, Darragh Leahy, Andy Boyle and captain Brian Gartland.

Up ahead in midfield, Chris Shields will be tasked with shoring up the defensive side of things, with the 29-year-old likely to be supported by Gregory Sloggett in the double pivot. Sloggett, though, will also need to connect midfield with attack, with Sean Murray expected to reprise the no. 10 role.

With Oduwa unlikely to start, Michael Duffy will be stationed on the left wing for Dundalk, with Stefan Colovic starting on the right flank. Finally, Patrick Hoban will lead the line for the visitors against Arsenal, with David McMillan being the backup option on the bench. 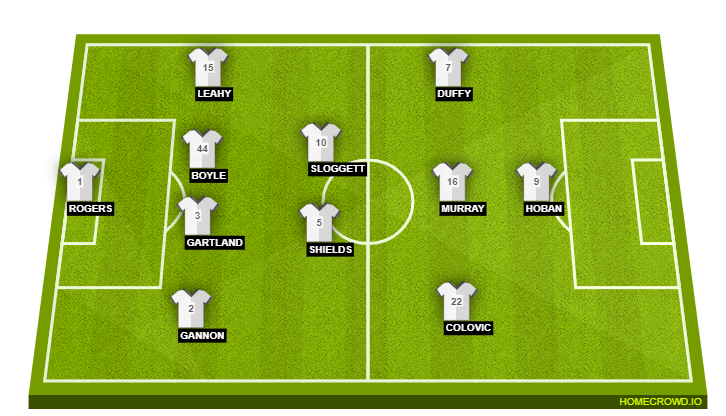 The pressure is on. (Photo by Julian Finney/Getty Images)

It has been a strange couple of years for Reiss Nelson. Since breaking into the first-team setup at Arsenal, the youngster has been unable to nail down a regular spot in the side, with Bukayo Saka usurping him in the past year or so. All summer long, it was believed that a loan move away from the club would be the right step for Nelson’s career progression.

However, as Mikel Arteta revealed this week, Nelson was determined to stay put at the Emirates to fight for his place in the first-team setup. Now is the chance for the young winger to earn his straps at Arsenal, especially with Nicolas Pepe and Willian both being inconsistent. A sub-par display against Dundalk, though, could hurt his prospects even further. A big game beckons Nelson.

Arsenal might be heavily rotated when Dundalk pay them a visit on Thursday. However, with a number of players having a point to prove, this could be the game wherein the Gunners break their shackles and produce a truly devastating performance. The visitors are unlikely to pose a great deal of threat and The Hard Tackle predicts a straightforward 3-0 win for Mikel Arteta & co.