Manchester United will welcome Chelsea to Old Trafford on Saturday in what is already a high stakes game despite the early stage of the season.

The action continues to come thick and fast across Europe, particularly for clubs that are also involved in European football. Two such teams will lock horns in a blockbuster encounter at Old Trafford on Saturday, as Manchester United play hosts to Chelsea in the marquee fixture in Gameweek 6 of the 2020/21 Premier League season.

Manchester United made a horribly slow start to the season, having had close to negligible pre-season preparations. The Red Devils have lost each of their two homes games so far this term, with the most recent being the 6-1 hammering they received at the hands of Tottenham.

However, their most recent results would fill Ole Gunnar Solskjaer & co. up with a lot of confidence, with hosts coming into the game on the back of a 2-1 win over PSG in the UEFA Champions League. Up next for Manchester United, are Chelsea, who were a part of Europe’s premier club competition as well, with Sevilla holding them to a goalless draw.

Things have been a little better on the domestic front, with Chelsea losing just one of their opening five games in the Premier League. However, the Blues have drawn two of the four remaining fixtures, including the 3-3 stalemate they played out with Southampton last weekend, squandering a two-goal lead to take just one point from the match.

The corresponding fixture last season ended in a 4-0 win for Manchester United, with Marcus Rashford (2), Anthony Martial and Daniel James on target. Ahead of the latest meeting between the two sides, The Hard Tackle takes a closer look at the encounter.

Harry Maguire is likely to return to the Manchester United starting lineup against Chelsea. (Photo by Oli Scarff/AFP via Getty Images)

Ole Gunnar Solskjaer does not have any fresh injury concerns hampering his preparations ahead of his side’s latest fixture. Against Chelsea on Saturday, the Manchester United manager will only be bereft of the services of three first-team players, while Phil Jones and Sergio Romero have been excluded from the club’s Premier League squad.

Eric Bailly and Jesse Lingard are struggling with minor injuries and are on the treatment tables, while Anthony Martial serves the second of his three-match ban after being sent off against Tottenham in Gameweek 4. Solskjaer, meanwhile, has been sweating over the fitness of Edinson Cavani, Mason Greenwood and captain Harry Maguire.

The Manchester United boss seemed to be hopeful of having the trio at his disposal while speaking with MUTV and they should all feature in some capacity. Solskjaer should also revert to his preferred 4-2-3-1 formation despite the success of the 3-5-2 formation against PSG earlier this week.

David de Gea has been sensational between the sticks in the last two games and there is no looking past him in goal for now. In front of him, Axel Tuanzebe’s impressive performance last time out should earn him a place alongside Maguire at the heart of the Manchester United defence. Luke Shaw and Aaron Wan-Bissaka being the full-back pairing.

Up ahead in midfield, Paul Pogba’s superb cameo ought to bring him into the discussion for a starting spot. However, given the nature of the game, Solskjaer will likely look to shore up the defensive side of things, meaning Fred and Scott McTominay should start in the double pivot for a third successive game.

Bruno Fernandes and Marcus Rashford have been the difference makers for Manchester United in the last couple of games and are certain starters in attack. Cavani is likely to get the nod to lead the line against Chelsea, with Juan Mata, who has made a fine start to the season, could occupy the right wing slot ahead of Greenwood. 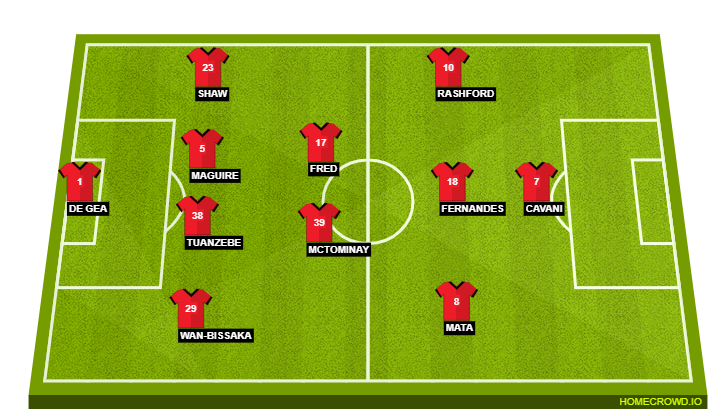 Like his counterpart in the Manchester United dugout, Frank Lampard does not have any pressing issues to contend with ahead of his side’s latest fixture. On Saturday, the Chelsea manager will be without just two first-team players.

Kepa Arrizabalaga is the fresh absentee, with the Spaniard missing with a shoulder injury, Lampard confirmed during his pre-match press conference, while Billy Gilmour is a long-term absentee. Otherwise, Lampard has a fully fit squad to choose from, with Hakim Ziyech close to earning his first start of the season.

Ziyech, though, is still not fit enough to be a part of the starting lineup, meaning Mason Mount will continue to be deployed as one of the two wingers, starting on the left flank. On the right wing, Christian Pulisic is a certainty, with Kai Havertz occupying the no. 10 slot.

Havertz will be given the freedom to roam across the pitch and his late runs into the box will carry a lot of threat. Timo Werner will spearhead the Chelsea attack, but will often often veer towards the wings to make room for Pulisic and Havertz.

In midfield, Mateo Kovacic is expected to return, pairing up with N’Golo Kante in the double pivot. The duo will be tasked with using their tremendous work-rate to disturb the Manchester United build-up play. In defence, there is unlikely to be any changes made by Lampard.

Thiago Silva and Kurt Zouma will continue to accompany each other at the heart of the Chelsea defence, with Reece James and Ben Chilwell, who were both impressive against Sevilla, being the two full-backs. Edouard Mendy is now the first-choice goalkeeper and will guard the goal against Manchester United.

Getting to the next level. (Photo by Catherine Ivill/Getty Images)

If there is one player in the footballing world who is admired the world over unconditionally, it is Marcus Rashford. Doing some fabulous work away from the pitch, the English international has also been letting his game do the talking for him on the field.

In fact, Rashford has four goals and two assists in seven games so far this season, showing that he is slowly but surely rediscovering his best form. The 22-year-old also a superb record against Chelsea, with four goals in his past three meetings with the Blues in all competitions, including a brace in this fixture last season.

If Manchester United are to continue their winning run, Rashford will need to be at his very best on Saturday. There seems to be no stopping the forward right now across all spectrum, but can Chelsea bolster their defence to halt him on the pitch at Old Trafford?

This is a fixture that should have a few goals in it. Neither Manchester United nor Chelsea have been renowned for their defensive prowess so far this season. In fact, Manchester United are yet to keep a single clean sheet in the Premier League in 2020/21 while Chelsea have managed just the one shut-out in five games.

Therefore, the final result hinges almost entirely on how the attack fares on Saturday. Manchester United are currently riding a wave of confidence, with Marcus Rashford and Bruno Fernandes getting to their best levels. With Fred holding the fort in midfield, the hosts might just manage to keep a lid on Chelsea’s output for long periods.

A debuting Edinson Cavani will be eager to make a difference as well and as things stand, Manchester United have the slightest of edges. With that in mind, The Hard Tackle predicts a 2-1 win for Ole Gunnar Solskjaer & co.