Real Madrid will hope to begin their UEFA Champions League campaign on a strong note when they welcome Shakhtar Donetsk to the Alfredo Di Stefano Stadium.

The curtains will fall on Matchday 1 of the UEFA Champions League group stages on Wednesday, with eight matches on show. Record winners Real Madrid will be one of 16 teams in action, as they play hosts to Shakhtar Donetsk at the Alfredo Di Stefano Stadium in their opening Group B clash.

Real Madrid have made a bit of a wobbly start to the 2020/21 season. While Los Blancos have lost just one of their five matches so far – their latest fixture – the 13-time Champions League winners have looked well off their best, particularly in the final third. Drawn in a tricky group with Borussia Monchengladbach, Inter Milan and Shakhtar Donetsk, they will need to find their best touch soon.

Speaking of Shakhtar, the defending Ukrainian champions have not made the best of starts to the current season either. While Luis Castro’s men are unbeaten after six games in the Ukrainian Premier League, they have won just three of those fixtures, leaving them third on the table.

Real Madrid and Shakhtar Donetsk last locked horns in the Champions League group stages back in the 2015/16 season, with the Merengues winning both the games. Ahead of the latest meeting between the two sides, The Hard Tackle takes a closer look at the encounter.

Sergio Ramos misses out for Real Madrid due to a knock. (Photo by Gonzalo Arroyo Moreno/Getty Images)

Zinedine Zidane was already hampered considerably by a number of injury concerns in his squad. Ahead of the visit of Shakhtar Donetsk on Wednesday, the Real Madrid boss is now sweating over the fitness of captain Sergio Ramos in addition to five other first-team players.

Ramos sustained a knock against Cadiz this past weekend and with El Clasico coming later this week, Zidane has chosen not to risk his skipper. As a result, the Real Madrid captain has been left out of the matchday squad for the game against Shakhtar.

In the absence of Ramos, Eder Militao becomes a certainty to partner Raphael Varane at the heart of the Real Madrid defence. Meanwhile, with Alvaro Odriozola and Dani Carvajal still unavailable, Nacho will keep his place as the hosts’ right-back, with Ferland Mendy coming in on the left flank. In goal, there is no looking past Thibaut Courtois.

Up ahead in midfield, a few rotations could be in order. Casemiro and Federico Valverde appeared off the bench against Cadiz. When Real Madrid take on Shakhtar, the duo ought to be recalled, with Toni Kroos starting alongside them in the three-man unit in the middle of the park. Luka Modric will, as a result, be saved for the big game this weekend.

Finally, in attack, the big decision for Zidane will be pertaining to Karim Benzema. It is likely that Zidane chooses to give his star striker a breather, with Luka Jovic getting a rare opportunity to impress. Out wide, Rodrygo Goes and Marco Asensio are expected to be recalled, with Vinicius Jr. and Lucas Vazquez dropping out. 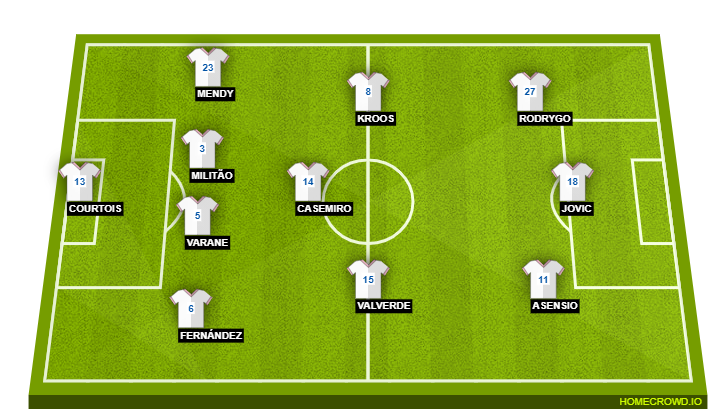 Like his counterpart in the Real Madrid dugout, Luis Castro has a numbers of pressing fitness issues to deal with ahead of his side’s first Champions League encounter this term. On Wednesday, the Shakhtar Donetsk manager could be without as many as ten first-team players.

Those who are certain to miss out are Mykola Matviyenko, Sergiy Kryvtsov, Ismaily, Alan Patrick, Taras Stepanenko, Viktor Kovalenko, Maksym Malyshev, Taison, Yevhen Konoplyanka and Junior Moraes. Meanwhile, captain Andriy Pyatov is a doubt due to a knock, but is expected to start versus Real Madrid.

Pyatov will take his place in the Shakhtar Donetsk goal and will be protected by a back four that will feature Dodo and Viktor Korniienko as the full-backs, while Davit Khocholava and Valeriy Bondar will form the central defensive partnership.

Meanwhile, with Castro preferring a 4-2-3-1 formation, the double pivot should feature Maycon and Marcos Antonio, with the duo tasked with keeping things tight in the middle of the park. The creative onus will rest on the shoulders of Marlos, who will be the makeshift attacking midfielder.

Finally, in attack, Dentinho will lead the line for Shakhtar Donetsk against Real Madrid, playing as a false nine and looking to create space for the two wide men, who ought to be Manor Salomon and Tete, with Fernando and Vladyslav Vakula being backup options on the bench. 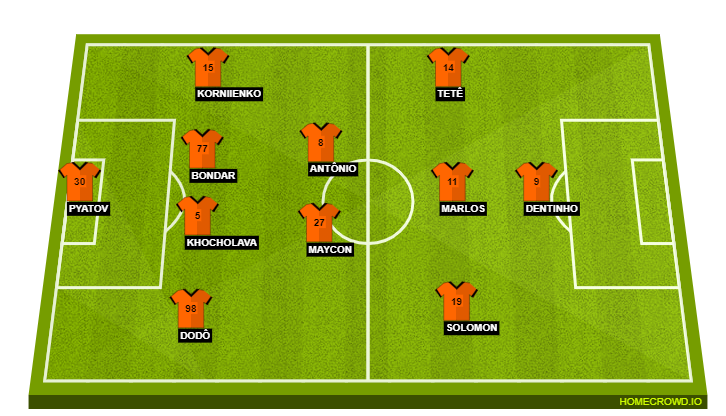 Time to make his mark. (Photo by Christophe Archambault/AFP/Getty Images)

Defence has been Real Madrid’s chief strength over the past twelve months or so. In fact, it was Los Blancos’ solidity at the back that enabled them to capture the La Liga title last term. Even when the attack was looking well off its best in the early stages of the season so far, it was the defence that was getting the job done.

However, the absence of Sergio Ramos changes things. Real Madrid are unlikely to be as organised as they usually are and it will be up to Eder Militao to fill the void at the heart of the defence. The Brazilian has featured scarcely for Real Madrid since joining from FC Porto, but this is his chance to impress. Will he grab his opportunity with both hands?

Real Madrid come into this match on the back of a shock defeat to Cadiz this past weekend. Ahead of the match, Zinedine Zidane will have one eye on the looming El Clasico later this week and he will be eager to see his side build some much-needed opponent.

A Shakhtar Donetsk side ravaged by injuries is just the kind of opponents Real Madrid needed to get up and running in the Champions League while giving the attack a chance to shine. This will also be a good test for Raphael Varane and Eder Militao, who should make their mark. The Hard Tackle, therefore, predicts a 2-0 win for Real Madrid on Wednesday.