Barcelona will hope to begin their UEFA Champions League campaign on a strong note when they welcome Ferencvaros to Camp Nou on Tuesday.

The UEFA Champions League is back with the group stages less than two months after the end of last season’s campaign. Barcelona will play in Europe for the first time this season on Tuesday, when they play hosts to Ferencvaros at Camp Nou in a Group G encounter.

Barcelona have been drawn in a tricky group along with Juventus, Dynamo Kyiv and Ferencvaros. The Blaugrana, though, would fancy their chances of progressing to the Round of 16. Having said that, Ronald Koeman & co. will surely need to pull their socks up after being beaten 1-0 by Getafe in La Liga this past weekend.

Ferencvaros, on the other hand, made it to the Champions League qualifying stage on the back of becoming Hungarian champions for a record 31st time. The Fradi went through three rounds of the qualification process, getting past Molde in the play-offs to reach the group stages. Serhiy Rebrov’s men have been in form in domestic football and are currently top of the Nemzeti Bajnoksag.

This is the very first time that Barcelona will be locking horns with Ferencvaros in the Champions League, and ahead of their maiden meeting, The Hard Tackle takes a closer look at the encounter.

Neto will continue to start in the absence of Marc-Andre ter Stegen. (Photo by Alex Caparros/Getty Images)

Ronald Koeman does not have any fresh injury concerns hampering his preparations ahead of the visit of Ferencvaros. On Tuesday, the Barcelona manager will continue to be bereft of the services of three first-team players.

The major absentees remain Marc-Andre ter Stegen (knee) and Jordi Alba (hamstring), while Samuel Umtiti’s fitness struggles continue as well. Who fills in for Alba this time around, though, will be an interesting decision from Koeman.

Last time out in La Liga, Sergino Dest started as the left-back, excelling in the role to a great extent as well. And, it is highly likely that Dest will be deployed on the left flank once again, with Junior Firpo missing out despite returning to full fitness. On the right wing, Sergi Roberto is a certainty for now.

At the heart of the Barcelona defence, there is no looking past Gerard Pique and Clement Lenglet, while Neto will continue to fill in for ter Stegen. Up ahead in midfield, Frenkie de Jong’s recent form is starting to become a concern. But, the Dutchman should retain his spot alongside Sergio Busquets, with Miralem Pjanic missing out again.

As for attack, big decisions need to be made. Antoine Griezmann faltered after talking big about playing through the middle. The Frenchman could be booted out, with Francisco Trincao getting a run out. Philippe Coutinho and Ansu Fati were both second half substitutes against Getafe and should start versus Ferencvaros, while Lionel Messi leads the line for Barcelona. 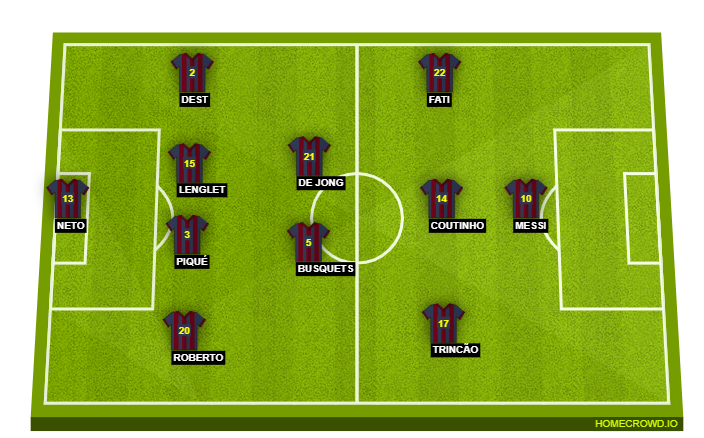 Unlike his counterpart in the Barcelona dugout, Serhiy Rebrov does not have any fitness issues to deal with whatsoever ahead of his side’s trip to Camp Nou. On Tuesday, the Ferencvaros manager will have a full strength squad at his disposal.

Rebrov prefers to line his side up in a 4-2-3-1 formation and should do the same against Barcelona in his side’s Champions League group stage opener. In goal, vice-captain Denes Dilbusz will be a busy man up against the might of Lionel Messi & co.

As for defence, captain Gergo Lovrencsics and Eldar Civic ought to be the full-back pairing, with Miha Blazic and Adnan Kovacevic partnering at the heart of the Ferencvaros defence. Up ahead in midfield, Igor Kharatin should have Somalia for company, with the duo primarily tasked with keeping things tight in the middle of the park.

Isael is likely to be the man in the hole, looking to pull the strings higher up the pitch whenever the opportunity presents itself. Tokmac Nguen and Oleksandr Zubkov will be the two wide men for Ferencvaros while Myrto Uzuni will lead the line against Barcelona after being rested in the build-up to the game. 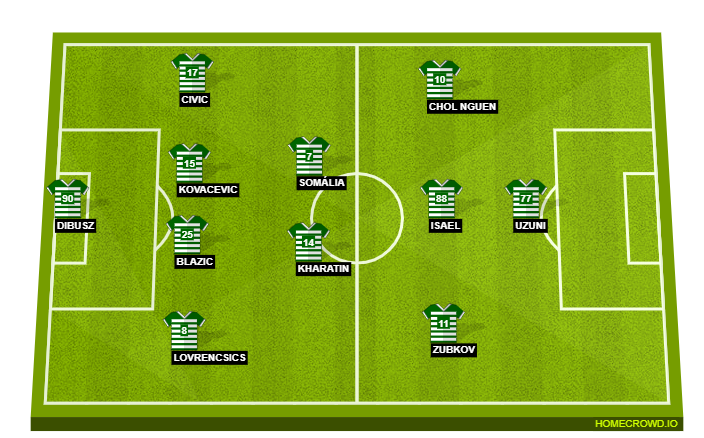 It has been a difficult start to the season. While the Dutchman impressed during international break, playing for Netherlands in the UEFA Nations League, his performances for Barcelona have not always caught the eye in the early stages of the season.

The youngster went missing last time out against Getafe as well and the calls to rotate him are starting to grow. Against Ferencvaros on Tuesday, de Jong has the chance to hit back at his naysayers and he will be eager to make it count in the Champions League.

Barcelona’s last memory in the UEFA Champions League is that 8-2 mauling they received from Bayern Munich. However, the Catalans now have the chance to start afresh. Drawn in a very tricky group, Barcelona will be eager to hit their stride early and that starts with the game against Ferencvaros.

The visitors, though, will not be pushovers, especially amid the form they are exhibiting at the moment. Nevertheless, the quality in the Barcelona side should be enough to get the hosts over the line. The Hard Tackle, therefore, predicts a 2-0 win for Ronald Koeman & co.