It’s master vs apprentice at the Etihad on Saturday as Manchester City welcome Arsenal in a potentially mouthwatering Premier League clash.

Premier League football resumes after a near two-week long hiatus, with the onset of Gameweek 5 of the 2020/21 season. Five of the ‘Big Six’ teams will be in action on Saturday, with two games, in particular, catching the eye. One such game will be played at the Etihad, where Manchester City will play hosts to Arsenal.

Manchester City made a delayed start to their 2020/21 campaign after participating in the UEFA Champions League quarter-finals last term. So far in the Premier League, the Citizens have turned out thrice, managing just win. Indeed, having failed to win their last two games, Pep Guardiola & co. find themselves in unfamiliar territory, languishing at 14th on the table.

Arsenal, on the other hand, have been reasonably solid at the start of the 2020/21 season. While the Gunners have not exactly set the stage alight in the final third, they have become a hard side to get the better of, which has reflected in the way they have won close games. Three wins in four have taken Mikel Arteta’s men to fourth on the Premier League table, a good base to build on.

The corresponding fixture last season ended in a 3-0 win for Manchester City, with David Luiz also seeing red for Arsenal in rather embarrassing fashion. Ahead of the latest meeting between the two sides, The Hard Tackle takes a closer look at the encounter.

Kevin De Bruyne has been ruled out of the game against Arsenal. (Photo by Michael Regan/Getty Images)

Pep Guardiola just cannot seem to be able to evade bad news when it comes to squad selection. On Saturday against Arsenal, the Manchester City manager will have to make do without two first-team players, although there is some good news to be greeted as well.

Sergio Aguero has returned to training recently, something Guardiola has been elated about. But, the Manchester City boss also confirmed in his pre-match press conference that Kevin De Bruyne will miss the game against Arsenal after picking up a muscular injury on international duty with Belgium. Also unavailable for the hosts is Gabriel Jesus.

With Jesus still unavailable and Aguero not quite fit enough to make the starting lineup already, it is likely that Raheem Sterling will lead the line for Manchester City versus Arsenal. The English forward, who has recovered from a knock of his own, will be flanked by Riyad Mahrez and Ferran Torres.

Meanwhile, in the absence of De Bruyne, the creative onus will fall on the shoulders of Bernardo Silva, while Phil Foden will provide the legs from the middle of the park. Rodri will sit at the base of the three-man midfield unit, playing the anchor man role.

Finally, in defence, there is no looking past Ruben Dias, Aymeric Laporte, Benjamin Mendy and Kyle Walker. Dias and Laporte will pair up at the heart of the Manchester City defence while Mendy and Walker will be the two full-backs, with Ederson Moraes starting in goal. 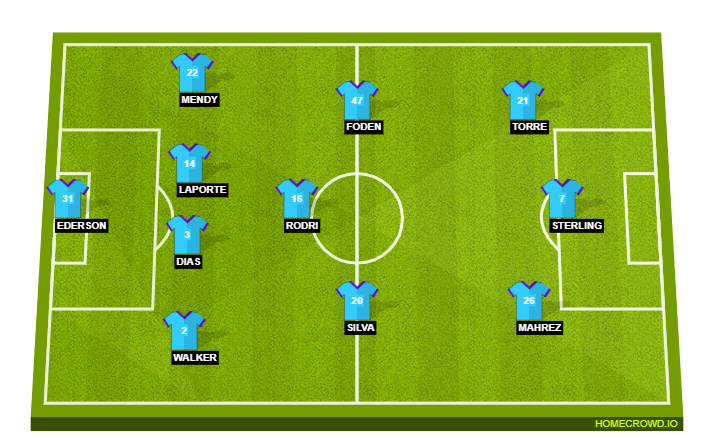 Much like his counterpart in the Manchester City dugout, Mikel Arteta is sweating over the possible availability of a key player. On Saturday, the Arsenal manager could be bereft of the services of as many as five first-team players.

The likes of Pablo Mari (ankle), Calum Chambers (knee), Shkodran Mustafi (hamstring) and Gabriel Martinelli (knee) were already unavailable. Arteta could also be without Kieran Tierney, with a possible quarantine looming for the Scottish international, although the Arsenal boss was hopeful of having Tierney at his disposal during his pre-match press conference.

With a cloud of uncertainty over Tierney’s availability, it is likely that Gabriel Magalhaes will start on the left of Arsenal’s three-man central defensive unit, with David Luiz and Rob Holding being his partners at the back. Bernd Leno is the obvious pick in goal, while Hector Bellerin and Bukayo Saka should be the wing-backs.

Up ahead in midfield, the big talking point has been the potential inclusion of Thomas Partey. The Ghanaian midfielder, who arrived from Atletico Madrid on deadline day, has only had two training sessions since joining Arsenal. However, he is likely to be thrown into the deep end, with Dani Ceballos providing the creative impetus from the middle of the park.

Finally, in attack, the first-choice trio of Pierre-Emerick Aubameyang, Alexandre Lacazette and Willian should reunited. Lacazette will lead the line for Arsenal against Manchester City, while Aubameyang, who has recovered from a knock, and Willian being the two wide men. 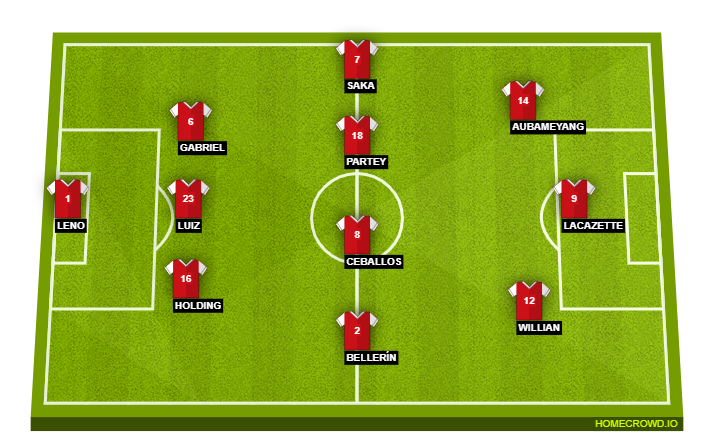 Will Aubameyang deliver the goods against Manchester City? (Photo by Alex Pantling/Getty Images)

He has been the go-to man for Arsenal pretty much since arriving from Borussia Dortmund nearly three years ago. In fact, very few players have managed to consistently perform at Pierre-Emerick Aubameyang’s level, let alone surpass them. As far as Arsenal are concerned, no player does more heavy lifting than the captain himself.

However, his record against Manchester City in the Premier League is a rare blot on his copybook so far during his Arsenal stint. On Saturday, Aubameyang will hope to set the record straight by delivering the goods in the final third.

Usually Manchester City enter a game against Arsenal as heavy favourites. After all, they handed the Gunners quite a pummeling the last time they faced off in the Premier League. However, as the north Londoners showed in the FA Cup semi-final last term, they are not a side to be taken lightly.

With Manchester City missing their chief playmaker and Sergio Aguero still not fit enough to start, the Citizens could struggle to breach a stubborn Arsenal defence. On the other end, though, they might not be troubled a great deal, with Arsenal being one of the most shot-shy teams in all of the Premier League.

All things considered, this has all the makings of being a closely-contested affair, one of which should end with both sides sharing the spoils. With that in mind, The Hard Tackle predicts the battle of the master Pep Guardiola and the apprentice Mikel Arteta to end all square, in a 1-1 draw.