Derby County will welcome Watford to the Pride Park Stadium on Friday night, hoping to continue their turnaround in form in the Championship.

Club football resumes all across Europe after a two-week hiatus due to the international break. In the EFL Championship, Matchday 5 of the 2020/21 season begins on Friday night, when struggling Derby County play hosts Watford at the Pride Park Stadium.

Derby County have made a horrific start to the 2020/21 season, with one win after four games in the Championship leaving them languishing at 20th on the table. An uninspired attack coupled with a vulnerable defence has contributed to the Rams’ struggles, with Phillip Cocu’s future now up in the air; captain Wayne Rooney is being touted to be the incumbent’s replacement.

Watford, on the other hand, have set about returning to the Premier League after just one season in the wilderness. With Vladimir Ivic now at the helm at Vicarage Road, the Hertfortdshire-based club has made a decent start to the 2020/21 season, losing just one of their four Championship outings. Having said that, the sole defeat came in their most recent encounter, against Reading.

Derby County and Watford played out a 2-2 draw the last time they faced off against each other at Pride Park Stadium in a league clash, back in April 2015. Ahead of the latest meeting between the two sides, The Hard Tackle takes a closer look at the encounter.

Krystian Bielik is closing in on his return from injury. (Photo by Claudio Villa/Getty Images)

Phillip Cocu does not have any pressing injury concerns hampering his preparations ahead of the visit of Watford. On Friday, the Derby County manager is unlikely to be bereft of the services of any first-team player, especially with Tom Lawrence and Martyn Waghorn returning to training.

Krystian Bielik is also on the recovery trail, but by his own admission, the game may have come too soon for him even though he is back in training. Lawrence is in line to make his first appearance this season, but Cocu is only likely to introduce him off the bench against Watford.

The Derby boss shuffled his formation to a 5-4-1 last time out after the 4-2-3-1 failed to work in the first couple of weeks. The same system should be persisted with against Watford on Friday as well, with David Marshall lining up in goal once again.

In front of him, Lee Buchanan and Nathan Byrne will pair up as the two full-backs who will charge forward during the offensive phase to enable the system to morph into a 3-6-1, with the midfielders remaining compact. The duo will, therefore, have a lot of creative responsibility on their shoulders.

As for the central defenders, Matt Clarke, George Evans and Curtis Davies will form the three-man unit, with Davies playing the sweeper role. Up ahead in midfield, Max Bird and Graeme Shinnie will be the two players who will shore up the defensive side of things, while Duane Holmes will look to transition from defence to attack.

Louie Sibley will play off the central striker, who ought to be captain Wayne Rooney. Rooney will also have set-piece duties and will hope to be clinical in front of goal when the opportunity presents itself. 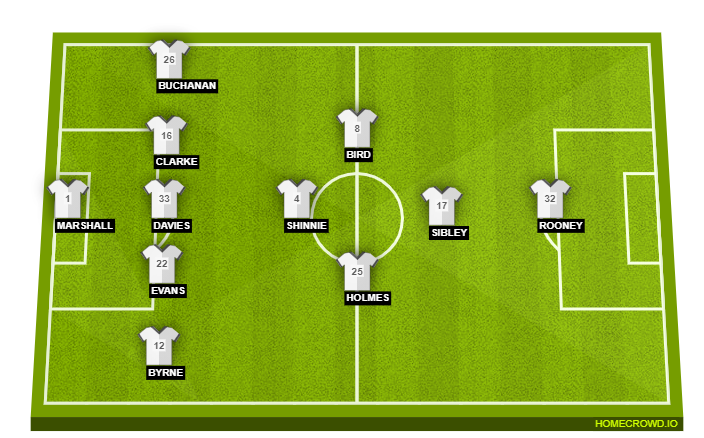 Unlike his counterpart in the Derby County dugout, Vladimir Ivic has a few fresh roster issues to contend with ahead of his side’s latest fixture. On Friday, the Watford boss will be without three first-team players due to injuries or suspension.

Stipe Perica serves the last of his three-match ban and will be unavailable once again when Watford take on Derby. Isaac Success is closing in on his return but the game might have come too soon for him. The major absentee for Watford, though, will be Tom Dele-Bashiru, who is out for nearly six months due to an ACL injury.

However, Watford are set to welcome Etienne Capoue back into the fold after the Frenchman failed to seal a move away from Vicarage Road. Meanwhile, Danny Welbeck and Daryl Janmaat are no longer at the club after being released by the Hornets.

Ivic has altered between a 5-4-1 and a 3-5-2 this season, with the latter likely to be the formation he uses against Derby. In goal, there is no looking past Ben Foster, who will be protected by a back-three featuring Ben Wilmot, Craigh Cathcart and Christian Kabasele. Jeremie Ngakia and Kiko Femenia will be the two wing-backs, who will drop back to create a back-five in defensive phases.

Up ahead in midfield, Capoue should slot in the midfield straightaway, slotting at the base to play the anchor man role. He will be supported by Tom Cleverley and impressive loanee James Garner. Finally, the strike partnership will feature Joao Pedro and Ismaila Sarr, who looks set to stay at Watford after being linked with Manchester United. 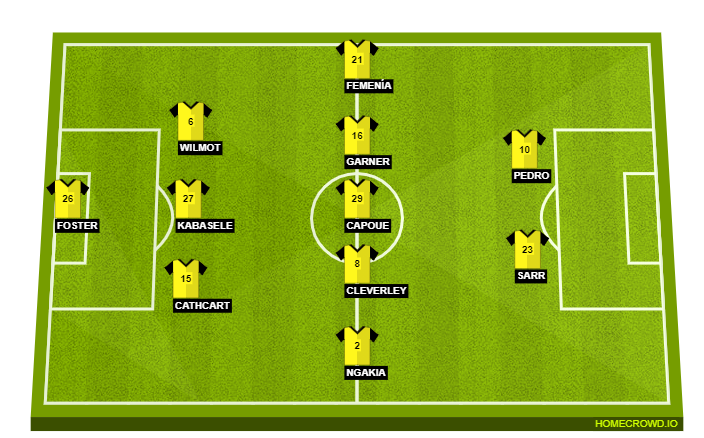 Out to make a point. (Photo by Nicholas Kamm/AFP/Getty Images)

Ever since Wayne Rooney returned to England by joining Derby County, he has been the single-most influential player at the Pride Park Stadium. The Manchester United legend has been the experienced head in a relatively young squad and has had to be the guiding light for those around him.

The same was the case last time out, as a brilliant free-kick earned Derby County their first win in the Championship this season. If they are to continue pulling away from the relegation zone, the Rams will definitely look up to their captain, who will need to be at his best for the hosts to get past Watford on Thursday.

This one is a bit tricky to call. Derby County have showed little form so far this season, but a shuffle in their system changed things for them last time out. Watford, on the other hand, have blown a little hot and cold so far and are coming off an underwhelming display against Reading.

With that being said, Derby are yet to win a game inside 90 minutes at the Pride Park Stadium so far this season. That is unlikely to change on Friday either, with the hosts not really posing a major threat in the final third. However, with their formation change making them a bit more solid at the back, Watford could be neutralised, which is why we are going with a 1-1 draw.