A blockbuster clash awaits us as Republic of Ireland prepare to welcome Wales to the Aviva Stadium in a UEFA Nations League tie on Sunday.

The action has been relentless so far during the international break and the games continue to be showcased on a daily basis. On Sunday, the action shifts to Dublin, with the Republic of Ireland set to play hosts to Wales at the Aviva Stadium, hoping to kickstart their UEFA Nations League campaign.

Ireland have begun a new phase in international football, with Stephen Kenny taking charge of the side for the first time last month. So far in three matches under the tutelage of their new head coach, they are yet to win even once, with the latest being a goalless stalemate against Russia.

Wales, on the other hand, have found stable footing under Ryan Giggs, who has slowly identified the core of his squad. The Dragons have made a solid start to their Nations League campaign as well, winning each of their two matches so far. However, Wales come into the game against Ireland on the back of a crushing 3-0 defeat at the hands of England this week.

Wales were victorious courtesy a second-half goal by Harry Wilson the last time they locked horns with the Republic of Ireland. Ahead of the latest meeting between the two sides, The Hard Tackle takes a closer look at the encounter.

Seamus Coleman misses out for Ireland due to injury. (Photo by Ian Walton/Getty Images)

Stephen Kenny has seen his squad being dissected due to injuries and coronavirus scares ahead of the visit of Wales. Before Sunday’s game, the Republic of Ireland boss has already lost the services of six players, with Aaron Connolly and Adam Idah bowing out due to a COVID-19 scare.

Those who miss out due to injury are Kieran O’Hara, Darragh Lenihan, Harry Arter and captain Seamus Coleman. In Coleman’s absence, Matt Doherty will once again reprise the right-back role for Ireland, with Enda Stevens a certainty on the left flank.

John Egan and Shane Duffy will likely complete the hosts’ backline, which will provide cover to Darren Randolph. Up ahead in midfield, James McCarthy and Conor Hourihane will pair up in the double pivot, with Robbie Brady and James McClean being the two wide men for Ireland.

Finally, the strike partnership will feature Shane Long in the absence of the withdrawn Connolly, with David McGoldrick starting alongside him in the final third. The in-form Callum Robinson will provide a backup option off the bench. 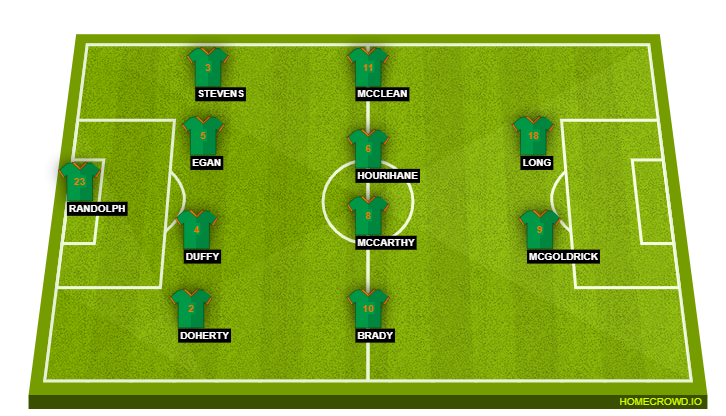 Much like his counterpart in the Republic of Ireland dugout, Ryan Giggs has had to contend with a lot of uncertainty in his squad selection. On Sunday, the Wales boss will have greeted both positive and negative news with respect to team news.

The good news is that Aaron Ramsey is likely to be at the Wales head coach’s disposal after being released from quarantine. However, Giggs will also be bereft of the services of Hal Robson-Kanu and Keiffer Moore, while Gareth Bale was already unavailable due to injury.

The return of Ramsey, though, will be a huge shot in the arm for Wales, who should draft in the Juventus midfielder straightaway. Ramsey will be deployed in the hole against Ireland, with Daniel James and David Brooks expected to start as the two wide men.

Upfront, Tyler Roberts is pretty much an automatic pick now owing to the injuries suffered by Moore and Robson-Kanu. In the midfield double pivot, Joe Morrell and Matthew Smith ought to pair up, with Dylan Levitt missing out.

Finally, in defence, Joe Rodon and Ethan Ampadu will be Wales’ central defensive partnership, with Ben Davies and Neco Williams being the full-back pairing for the visitors. In goal, there is no looking past Wayne Hennessey. 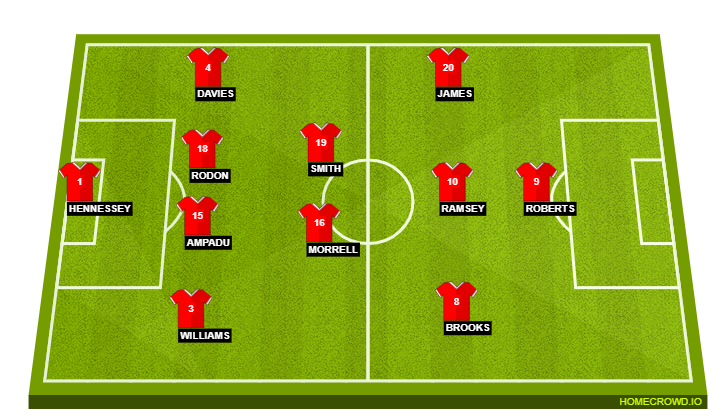 Will Daniel James star for Wales against Ireland? (Photo by Geoff Caddick/AFP/Getty Images)

It has been an odd sort of year for Daniel James. After making a solid enough start to life as a Manchester United player, James has fallen down the pecking order at Old Trafford and is now a squad option at the club.

With Wales, however, his status has hardly changed, with Ryan Giggs counting on him to be one of his go-to men in attack. As chances start drying up for him at club level, James needs to make an impression at the international stage to win his place back. Will he deliver the goods against Ireland on Sunday?

This is a tough one to call. The return of Aaron Ramsey provides Wales with some spark they need in the absence of Gareth Bale. However, their attack still lacks the bite, which is also true for hosts, Republic of Ireland. Neither side is particularly strong at the back either and this has all the makings of a stalemate. The Hard Tackle predicts a 1-1 draw in Dublin.