Spain will hope to consolidate their place atop Group A4 when they play hosts to Switzerland at the Alfredo Di Stefano Stadium on Saturday.

The games are coming thick and fast in the international break, in what is a packed schedule for just about every team involved. The UEFA Nations League resumes this week, with leaders of Group A4, Spain welcoming Switzerland to the Alfredo Di Stefano Stadium on Saturday night.

Spain have found stable footing since the debacle that was the 2018 FIFA World Cup. While they did not do a great deal in the inaugural UEFA Nations League, La Roja were formidable in the Euro Qualifiers, breezing through the qualification process. Luis Enrique & co. have since started the latest Nations League campaign in solid fashion, with 4 points from the opening 2 games.

Switzerland, on the other hand, reached the finals of the UEFA Nations League last time out before bowing out in the penultimate stage. The Rossocrociati then breezed through the Euro Qualifiers to book their place in the finals. Their campaign in the second edition of the Nations League has not started all too well, with Vladimir Petkovic’s men raking in just 1 point from 2 games so far.

Spain and Switzerland played out a 1-1 draw the last time they face off against each other, back in 2018, with Alvaro Odriozola and Ricardo Rodriguez scoring the goals. Ahead of the latest meeting between the two sides, The Hard Tackle takes a closer look at the encounter.

Luis Enrique has made a couple of changes to the squad that he had picked for the September round of international fixtures. The aforementioned two changes see Thiago Alcantara and Oscar dropping out of the Spain squad, with the former currently recovering from COVID-19.

After giving a breather to a number of his players, the Spain head coach should shuffle his pack to an extent. The first change ought to come in goal, with David de Gea replacing Kepa Arrizabalaga despite the fact that the Chelsea goalkeeper kept a clean sheet against Portugal last time out.

In front of de Gea, Enrique should line his side up in a 4-3-3 formation. Sergio Ramos started on the bench in the previous game but will return to the heart of Spain’s defence against Switzerland. Ramos will don the armband for Spain, with Pau Torres likely to be his central defensive partner. Out wide, Jose Gaya and Jesus Navas should be the full-back pairing.

Up ahead in midfield, Sergio Busquets might be the only player retaining his place, with Rodri and Mikel Merino expected to provide him company in the middle of the park. Finally, in attack, Adama Traore could make his first start for Spain after making his debut off the bench in the Portugal game.

Traore ought to be deployed on the right side of Spain’s attack, with Rodrigo Moreno leading the line for Spain. The final spot, on the left-wing, will have the impressive young Ansu Fati starting, with several backup options available on the bench. 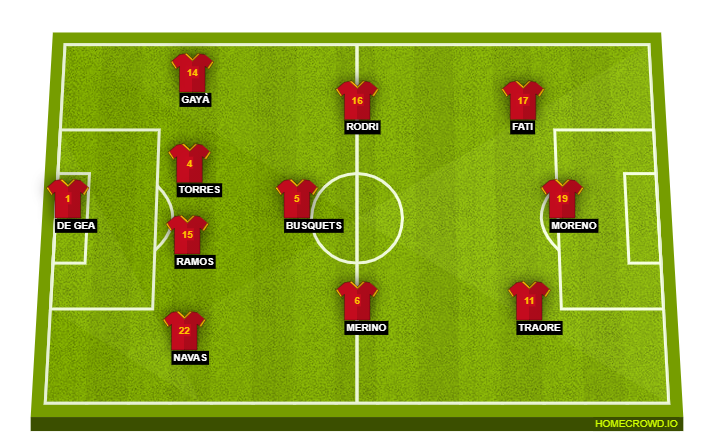 Unlike his counterpart in the Spain dugout, Vladimir Petkovic has made a number of alterations to the last squad that was chosen, back in September. The likes of Michael Lang, Kevin Mbabu, Michel Aebischer, Breel Embolo and Albian Ajeti found no place in the Switzerland squad for one reason or another.

The visitors have been weakened further, with Renato Steffen pulling out from the squad. Manuel Akanji, meanwhile, misses out as well as he self-isolates after testing positive for the coronavirus. However, there is some good news, with Xherdan Shaqiri returning to the fold after a negative test.

Shaqiri, though, might not be drafted in the starting lineup straightaway, with Petkovic easing him back into the thick of things. The Switzerland boss had utilised a 3-5-2 last time out against Croatia but should switch to a 3-4-3 when they take on Spain.

In goal, there is no looking past the brilliant Yann Sommer, with the back-three in front of him featuring Nico Elvedi, Ricardo Rodriguez and Fabian Schar. As for the wing-backs, Petkovic should give the nod to Silvan Widmer and Loris Benito out wide.

In the middle of the park, captain Granit Xhaka will likely have Steven Zuber for company, with the duo looking to pull the strings in midfield. Finally, Haris Seferovic will spearhead the Switzerland attack against Spain, with Ruben Vargas and Christian Fassnacht being the two wide men. 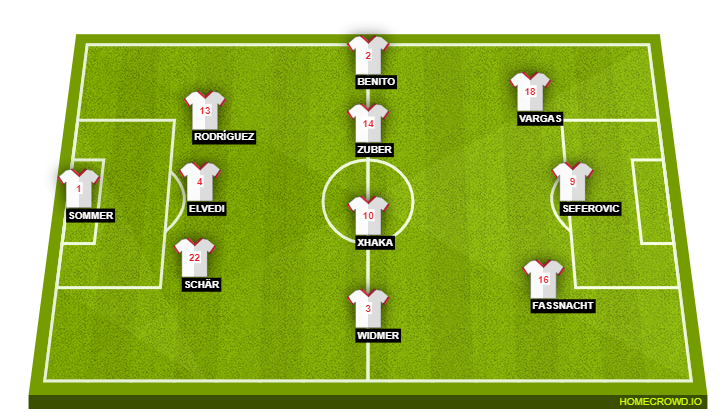 Will Xhaka deliver the goods? (Photo by Warren Little/Getty Images)

The Swiss squad has been hit hard by various factors ahead of the latest international break. But, one man who remains a constant for Switzerland is captain Granit Xhaka. Enjoying a resurgence at Arsenal, the 28-year-old has been taking on more responsibility, which is exactly what he needs to do in order to contain Spain on Saturday. Can Xhaka neutralise the Spanish threat in Madrid?

Spain were hardly fluent in their game against Portugal this week, with Rui Patricio denying them a goal for the first time in over 40 games. Having said that, their opponents Switzerland hardly showed any semblance of good form against Croatia, meaning this one could be a closely contested affair.

In such a game, the quality in depth becomes a crucial factor and it is here that Spain quite clearly trump Switzerland. Expect a game that should be an end-to-end affair, with Spain dominating the crucial periods. The Hard Tackle, therefore, predicts a 2-1 win Luis Enrique & co.