England will hope to extend their unbeaten run when they play hosts to Wales at Wembley in a friendly encounter on Thursday.

The latest international break might only be in its infancy, but it is surely greeting us with some enticing match-ups already. One such fixture will see England take on Wales at Wembley in what could be more than just a friendly affair, with pride at stake in the game as well.

England continue to remain a stable unit under the tutelage of Gareth Southgate, having become a side that is not straightforward to overcome. However, in recent times, the Three Lions’ head coach has come under criticism for a rigid style of play that is far from eye-catching. Nevertheless, the hosts are on a decent run of form, having not been beaten in any of their last five games.

England’s opponents on Thursday, Wales, on the other hand, are on an even longer run of unbeaten results. The Dragons have not been defeated in any of their last eight games, dating back to June last year. Ryan Giggs’s men, in this run, had also enjoyed a four-match winning streak that saw them keep a clean sheet in every game.

Wales suffered a 2-1 defeat at the hands of England the last time these teams clashed, with Daniel Sturridge scoring a last minute winner. Ahead of the latest meeting between the two sides, The Hard Tackle takes a closer look at the encounter.

Raheem Sterling will play no part against Wales. (Photo by Michael Regan/Getty Images)

Gareth Southgate has not made too many alterations to the most recent squad that he had picked, during the international break last month. Phil Foden and Mason Greenwood, who are not exactly in the England head coach’s good books right now, have been omitted.

The big miss for England, though, is Raheem Sterling. The winger has pulled  out from national duty due to an injury and will play no part for the Three Lions in the coming week or so. Meanwhile, Tammy Abraham, Jadon Sancho and Ben Chilwell will play no part against Wales after breaching COVID regulations.

Considering England have two crucial matches in the UEFA Nations League coming up, Southgate could use this fixture to blood in some of his younger players. Chief among these is the in-form Dominic Calvert-Lewin, who will lead the line against Wales in a 3-4-3 formation.

The young striker has been a part of the high-flying Everton side that has taken the Premier League by storm. Calvert-Lewin ought to have fellow debutant Harvey Barnes for company in the three-man attack, with Marcus Rashford bizarrely adding the experience factor in the final third.

Declan Rice should start to provide stability and steel in the middle of the park. James Ward-Prowse ought to be his partner in the double pivot. As for defence, Southgate has a plethora of options at his disposal, with Bukayo Saka and Reece James, who have both received their maiden call-ups, making their England debuts against Wales.

Harry Maguire should get the chance to return to the England setup after missing out last month. The Manchester United captain will play the sweeper role in the back-three, with Conor Coady and Michael Keane expected to be his partners. In goal, Nick Pope should get a chance to prove his credentials on the international level. 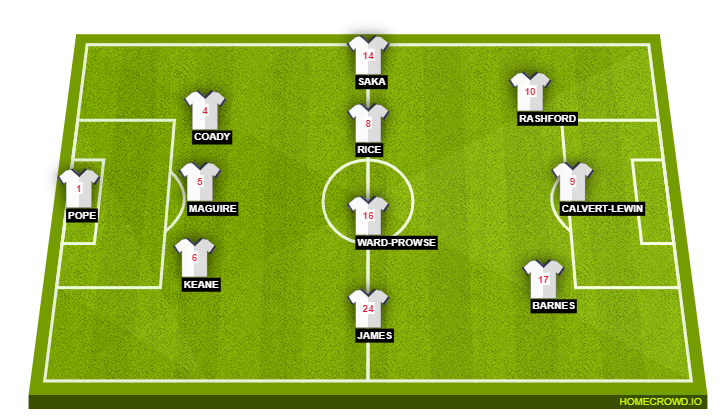 Like his counterpart in the England dugout, Ryan Giggs will be bereft of the services of several key players in his squad. The Wales boss will see the likes of Hal Robson-Kanu, Gareth Bale, Joe Allen and Tom Lockyer miss out, while Aaron Ramsey is unavailable as well due to quarantine rules affecting the entire Juventus squad.

With so many regular faces missing, Giggs will be forced to field a slightly weaker side, especially in attack. Kieffer Moore will spearhead Wales’s attack against England, with Daniel James and David Brooks expected to be the two wide men.

In Ramsey’s absence, Jonny Williams ought to be deployed in the hole, where he will have a free role to make his mark. Joe Morrell and Dylan Levitt are likely to pair up in the midfield double pivot, with the duo having the responsibility of keeping a check on Marcus Rashford and Harvey Barnes.

Finally, in defence, Ben Davies and Neco Williams will fancy their chances, with the latter using this fixture as a chance to build his confidence after a slow start to the season. At the heart of Wales’s backline, Chris Mepham and Ethan Ampadu are expected to form the central defensive partnership, with Wayne Hennessey starting in goal. 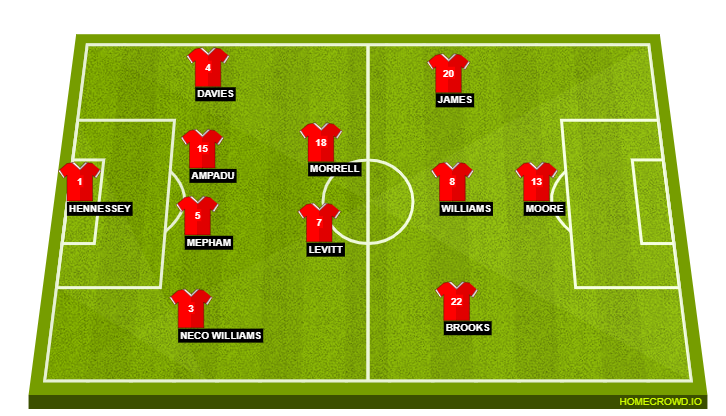 It has been quite the electric start to the season for Dominic Calvert-Lewin, who looks like he is slowly starting to become a fearsome force of nature in front of goal. The early leader in the Premier League Golden Boot race, Calvert-Lewin will now hope to translate his form at the international stage. Can the Everton striker continue his fine run in England’s colours?

England have come in for criticism under Gareth Southgate lately. However, they are coming up against a side that seems to have a mental block when facing them. Wales have been on a fine run for well over a year now and should take the game to the Three Lions. However, the quality on England’s bench means there is only one result that is expected from this tie. We predict a 2-1 win for England.