Leicester City will look to move back to the top of the Premier League table when they welcome West Ham United to the King Power Stadium on Sunday.

Gameweek 4 of the 2020/21 Premier League is underway, with six matches on show on Sunday before club football gets a short respite during the international break. The first game of the day will be played at the King Power Stadium, where Leicester City play hosts to West Ham United.

Leicester City ended the 2019/20 campaign on a whimper to narrowly miss Champions League qualification. The Foxes, though, have hit the reset button and have since slowly rediscovered their best touch. Brendan Rodgers’s men have won each of their first three Premier League games, one of which was last week’s shock 5-2 rout of Manchester City.

Leicester are also one of only two sides to be in double figures for goals scored this term. Having been perched comfortably atop the Premier League table heading into the gameweek, they slipped down to the second place after Everton’s 4-2 win against Brighton on Saturday. And the Foxes will be aiming to reclaim the top spot with a win.

Their opponents on Sunday, West Ham United, have been hit and miss in the first month of the 2020/21 season. The Hammers began their campaign with back-to-back defeats at the hands of Newcastle United and Arsenal.

The only solace midway through September was their progress to the Carabao Cup third round. But, David Moyes & co. bounced back strongly with successive wins, one of which was the 4-0 thrashing of Wolves last weekend. West Ham, though, come into this game after being knocked out of the League Cup by Everton and will be eager to return to winning ways.

The corresponding fixture last season ended in a convincing 4-1 win for Leicester City, with Mark Noble scoring the consolation goal for West Ham United. Ahead of the latest meeting between the two sides, The Hard Tackle takes a closer look at the Premier League encounter.

Cengo trains with the Foxes 😄

Brendan Rodgers does not have too many fitness issues hampering his preparation ahead of the visit of West Ham United. On Sunday, the Leicester City manager will be without just three first-team players, with those with minor niggles all expected to be available.

Rodgers had been sweating over the fitness of Jonny Evans and Dennis Praet in the build-up to the game. But, while Evans is fully fit, Praet faces a late fitness test to determine his availability. The big concern ahead of the game against West Ham, though, was the situation of Jamie Vardy, who had been struggling with a hip injury this week.

However, Rodgers confirmed during his pre-match press conference that Vardy is available to take on West Ham. The veteran striker should, therefore, lead the line for Leicester on Sunday. As for those who miss out for the hosts, Wilfred Ndidi and Filip Benkovic are still in the treatment room, while Ricardo Pereira is continuing his rehabilitation after recovering from a knee injury.

Cengiz Under is available, but is likely to be eased into the thick of things. With the Turkish winger unlikely to start, James Maddison should be deployed in an unfamiliar right-wing slot, considering Ayoze Perez has hardly made an impression so far. On the opposite flank, there is no looking past Harvey Barnes.

Youri Tielemans and Praet will take up the centrally advanced positions on the pitch, with the duo combining with Maddison to string together the chances for Vardy. Indeed, with Timothy Castagne being tasked with marauding down the right flank, Maddison should create more overloads in the central areas. Nampalys Mendy will, meanwhile, sit at the base of the midfield.

Mendy will provide cover to a four-man backline that will feature Castagne, James Justin, Evans and Caglar Soyuncu. Talented young centre-back Wesley Fofana joined Leicester this week, but is expected to slowly be phased in, meaning Evans and Soyuncu pair up at the heart of the Leicester defence. In goal, there is no looking past Kasper Schmeichel. 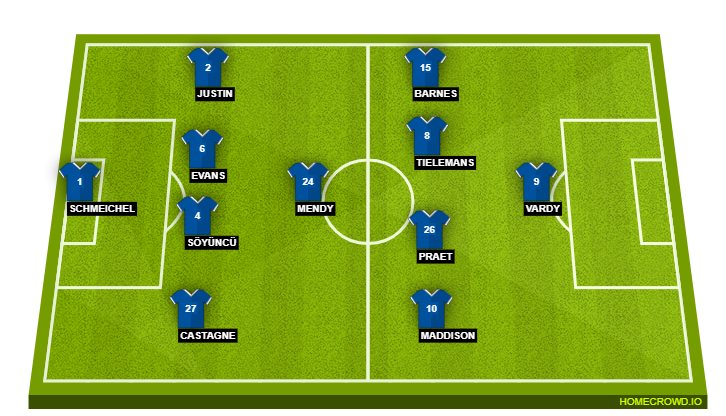 David Moyes does not have many pressing concerns to contend with ahead of the trip to the King Power Stadium. Against Leicester City on Sunday, the West Ham United boss, who will once again be relaying the instructions remotely as he recovers from COVID-19, will be bereft of the services of just one player, with Ryan Fredericks out with a thigh injury.

Fredericks, too, should be available after the international break, meaning Moyes will soon have a full-strength squad at his disposal. There is some good news as well, though, with Issa Diop and Josh Cullen now available after recovering from the coronavirus.

Diop could be recalled into the starting lineup straight away but is expected to sit this one out, with Fabian Balbuena starting in his stead. Balbuena will once again be part of the 3-4-3 formation that worked wonders against Wolverhampton Wanderers last weekend, with Angelo Ogbonna and Aaron Cresswell being his partners in the back-three.

The three-man central defensive unit will provide cover to Lukasz Fabianski, with Arthur Masuaku and Ben Johnson being the wing-back pairing for West Ham. In midfield, Declan Rice and Tomas Soucek are the obvious choices in the double pivot, with captain Mark Noble missing out against Leicester.

Finally, in attack, there is no looking past Jarrod Bowen, Pablo Fornals and Michail Antonio. While Antonio will lead the line for West Ham against Leicester, Fornals and Bowen will provide creative support, with the duo taking up more central positions during the offensive phases. Off the ball, the pair will move out to the flanks to negate the influence of the Leicester full-backs. 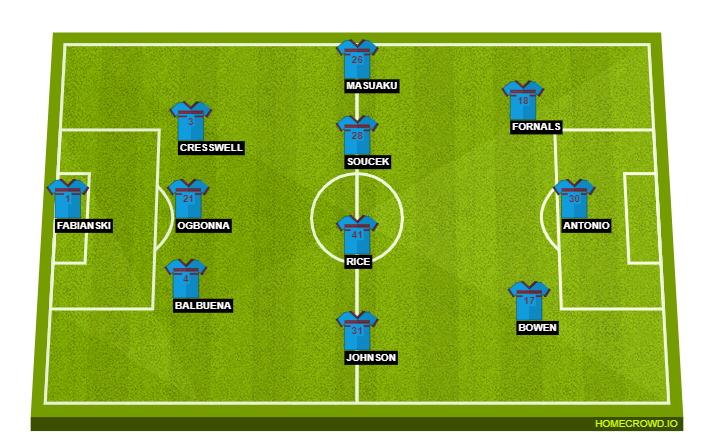 Who else but the ageless wonder? Jamie Vardy’s Cinderella story is quite well known by now. But, despite everything he has achieved, since his top-flight debut in 2014, it is still baffling that he keeps finding ways to scale newer heights in his career.

After winning the Premier League Golden Boot last season, Vardy is once again in the thick of things for the top scorer’s prize early into the campaign. Granted, four of his five goals have come from the spot, but last weekend, he also scored from the only real chance that was presented to him.

With James Maddison slowly regaining his rhythm, the only way seems to be up for Vardy, who will fancy his chances to get back on top of his perch by displacing the high-flying Dominic Calvert-Lewin. Will the veteran striker continue his fine run of form?

West Ham United might have been mighty impressive against Wolverhampton Wanderers last weekend, but they could fall face first this weekend at the King Power Stadium. Leicester City are not only coming off a buoying 5-2 win over Manchester City, they have also had the entire week off, unlike their visitors.

Furthermore, the Hammers have kept just three clean sheets in the Premier League in 2020, fewer than any current top-flight side excluding the newly-promoted clubs. One of those came last week and one can be sure that Leicester will pose more of a threat – and more consistently so – than Wolves.

Having said that, the continued absence of Wilfred Ndidi puts Leicester in a bit of bothersome state defensively, meaning West Ham United will fancy their chances of getting past Kasper Schmeichel. For all intents and purposes, though, this should be a comfortable afternoon for the Foxes and we are going with a 3-1 win for Brendan Rodgers & co.