Bournemouth will welcome Norwich City to the Vitality Stadium on Sunday, with both sides looking to extend their unbeaten start to their Championship campaigns.

The action all across England is quite relentless, with all the divisions progressing at frantic pace at this early stage of the season. An eye-catching fixture in the Championship on Sunday will pit two of the most recently relegated sides, as Bournemouth play hosts to Norwich City at the Vitality Stadium.

Bournemouth are unbeaten in the Championship so far after the first couple of round of fixtures, beating Blackburn Rovers 3-2 before being held to a 1-1 draw by Middlesbrough last weekend. The Cherries have also been participating in the Carabao Cup.

Jason Tindall’s men reached the competition’s third round by beating Crystal Palace on penalties, before bowing out of the competition this week, at the end of a 2-1 defeat to Manchester City. Despite suffering their first loss of the season, Bournemouth will be pleased by their fighting spirit in the game. Up next for them, are Norwich City.

Like their hosts on Sunday, the Canaries have won one and drawn one game in the Championship, a run of results that has left them 12th on the table. Norwich, though, were out of the Carabao Cup in the first round, at the hands of Luton Town, meaning Daniel Farke’s men would be fresher than the Cherries this weekend.

Bournemouth and Norwich played out a drab goalless draw the last time they locked horns at the Vitality Stadium, with just three shots on target from both teams combined. Ahead of the latest meeting between the two sides, The Hard Tackle takes a closer look at the encounter.

David Brooks will look to make the difference against Norwich City. (Photo by Warren Little/Getty Images)

Jason Tindall does not have injury concerns hampering his preparations ahead of the visit of Norwich City. On Sunday, the Bournemouth manager will have a full strength squad at his disposal, with only Lloyd Kelly being a doubt due to a knock he picked up against Manchester City.

If Kelly is not fit enough to start against Norwich, Jack Simpson should come in at the heart of the Bournemouth defence. Meanwhile, Tindall has shown a preference for the 5-4-1 formation in his early days as the Cherries’ manager. This system sees the original shape remain while defending, but opens up to become a 3-4-3 when they transition towards attack.

Simpson ought to have Chris Mepham and Steve Cook for company in the three-man central defensive unit. Out wide, Jack Stacey and Adam Smith will form the full-back pairing, with the duo playing as wing-backs during turnovers, charging forward to create a problem of plenty. In goal, Asmir Begovic picks himself and could be a busy man against Norwich.

Up ahead in midfield, Jefferson Lerma will hold the key, as he looks to shield the backline with an energetic display. Lerma should have Lewis Cook for company, with the player in-charge of linking up with the front men.

David Brooks is a certainty on the right flank and the young midfielder, who has been linked with Manchester United, will provide a burst of creativity in the final third. On the opposite flank, Arnaut Danjuma Groeneveld will be deployed, with Dominic Solanke expected to lead the line for Bournemouth against Norwich. 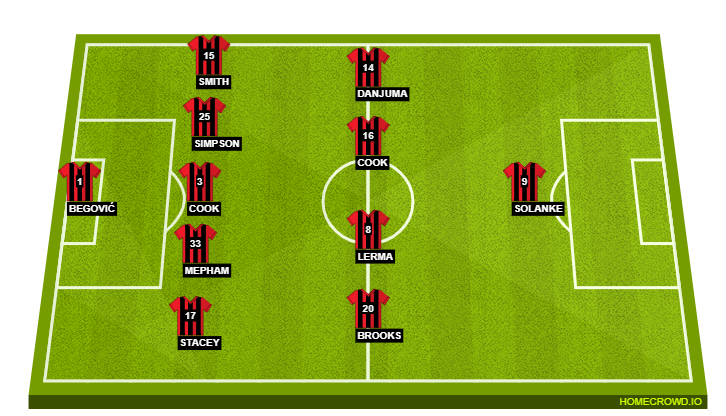 Unlike his counterpart in the Bournemouth dugout, Daniel Farke has a number of injury troubles hampering his preparations ahead of the trip to the Vitality Stadium. On Sunday, the Norwich City manager could be without as many as five first-team players.

While the likes of Grant Hanley, Sam Byram and Kieran Dowell are currently on the sidelines, the visitors could also be bereft of the services of a couple more players. Emiliano Buendia and Marco Stiepermann are battling to make themselves available against Bournemouth, but might have to settle with a place on bench.

Daniel Farke’s preference for the 4-2-3-1 formation is well known and Norwich should once again line up in that system, with Tim Krul taking his customary place between the sticks. The Dutchman will be protected by a back four that will have Max Aarons, Christoph Zimmermann, Ben Godfrey and Xavi Quintilla, with the two full-backs given the license to charge forward.

Up ahead in midfield, Kenny McLean and Oliver Skipp will form the double pivot, with the duo having a lot of responsibility on their shoulders, for Norwich to come away with all three points. Onel Hernandez and Przemysław Płacheta will be the two wide men, while Todd Cantwell will play off Teemu Pukki, who will lead the line for Norwich against Bournemouth. 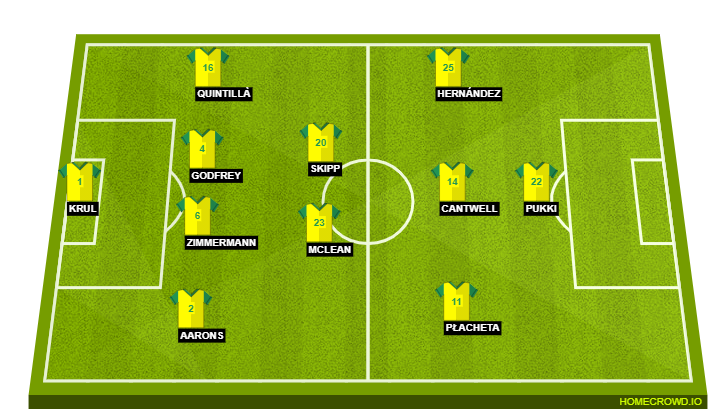 While all eyes will invariably be on Teemu Pukku, Todd Cantwell will be the X-Factor for Norwich City, as they strive to get the better of Bournemouth. The youngster made quite an impression in the Premier League, and was consequently linked with Manchester United, among other clubs.

If Norwich are to make a swift return to the Premier League, Cantwell’s performances will, more often than not, be critical for the Canaries’ fortunes. Against a Bournemouth side that does seem to be improving despite the departure of Eddie Howe, Norwich will need someone like Cantwell to run the channels and pose a threat with ghosting runs in and around the box.

This one is a toughie. Bournemouth showed a lot of character at Manchester City, but the players will be quite fatigued after an intense game. Norwich, on the other hand, are fresh and will look to bounce back to winning ways. In a game of fine margins, a narrow win is the likeliest outcome and we are going with Bournemouth for this one, with David Brooks making the difference.