Manchester City will hope to make it two wins in two at the start of their Premier League campaign when they welcome Leicester City to Etihad on Sunday.

Gameweek 3 of the 2020/21 Premier League season continues into its second day, with four games on show. The marquee tie on Sunday will be played out at the Etihad Stadium, where Manchester City will play hosts to early table toppers Leicester City, with at least one of the sides set to have their perfect record at the onset of the top-flight campaign snapped.

Manchester City started their 2020/21 campaign a week later than most teams in the Premier League, owing to their participation in the UEFA Champions League quarter-finals last month. Pep Guardiola & co. kick-started their campaign earlier this week, when they traveled to the Molineux to take on Wolves, grabbing all three points at the end of a 3-1 win.

The Citizens then had to slog it out in the Carabao Cup, coming from behind to beat Championship outfit Bournemouth 2-1 in the third round. Up next for Manchester City are Leicester City, who have begun their season quite strongly.

The Foxes are currently perched atop the Premier League table after winning both of their opening two games, and quite handsomely so. However, Brendan Rodgers & co. are already out of one cup competition, following their 2-0 defeat at home to Arsenal in the Carabao Cup earlier this week.

The corresponding fixture in the 2019/20 season, played in December last year, ended in a 3-1 win for Manchester City after Leicester had taken the lead midway through the first half. Ahead of the latest meeting between the two sides, The Hard Tackle takes a closer look at the encounter.

Gabriel Jesus is the latest Manchester City player to be sidelined early into the season. (Photo by Laurence Griffiths/Getty Images)

Manchester City are in all sorts of trouble as far as roster issues in the first-team squad go. Against Leicester City on Sunday, Pep Guardiola, who has claimed that he has just 13 fit senior players at his disposal, will be bereft of the services of as many as seven first-team members.

The squad has been ravaged across all departments but one, with Ederson Moraes fully fit. Having said that, those who are certain to miss out for Manchester City are Oleksandr Zinchenko, Joao Cancelo, Ilkay Gundogan (coronavirus), Bernardo Silva, Sergio Aguero and Gabriel Jesus, who is the latest to be sidelined for the hosts.

In addition, Guardiola could also have to make do without Aymeric Laporte once again, with the Frenchman only just making his way back to training after recovering from COVID-19. Fortunately for the Manchester City boss, he can count upon ex-Leicester City winger Riyad Mahrez, who ought to start on the right flank against his former side.

Mahrez’s inclusion on the right wing means Phil Foden moves to the left, with Raheem Sterling likely to be deployed as a striker in the absence of Jesus and Aguero. Sterling will have Kevin De Bruyne playing off him. The team news update on the Manchester City website makes no mention of a possible concussion for De Bruyne, meaning he starts.

Meanwhile, a lack of backup options means the highly-rated Liam Delap could be on the bench along with Ferran Torres. Back to the team selection, and Guardiola is expected to go with the double pivot of Fernandinho and Rodri once again, so as to add steel to the Manchester City midfield.

Finally, in defence, a lack of options means Kyle Walker, John Stones, Nathan Ake and Benjamin Mendy all pick themselves, with Eric Garcia the only other senior defender available. Goalkeeper Ederson Moraes will start between the sticks. 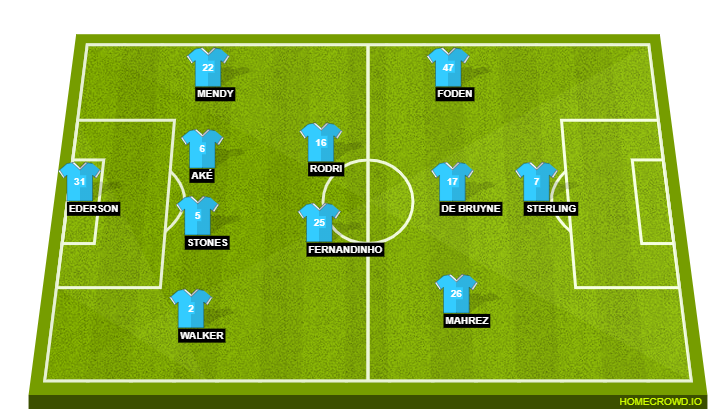 Like his counterpart in the Manchester City dugout, Brendan Rodgers has a fair share of problems to deal with as well, ahead of his side’s latest fixture. On Sunday, the Leicester City manager could be without as many as five first-team players, although he has greeted a major positive news too.

Jonny Evans, who has served out his suspension, has also made himself available before the trip to take on Manchester City after recovering from a thigh injury. The former Manchester United man should, therefore, be back in the starting lineup straightaway, pairing up with Caglar Soyuncu at the heart of the Leicester City backline and will look to keep a check on Raheem Sterling.

As for the full-back pairing, with Ricardo Pereira still in rehabilitation from a long-term ACL injury, Timothy Castagne and James Justin will start on the right and left sides, respectively. In goal, there is no looking past the ever-present Kasper Schmeichel, who will don the armband for the visitors against Manchester City.

However, it is not all rosy for Leicester, with Rodgers losing the services of Wilfred Ndidi following his surgery for an adductor injury. The Nigerian midfielder is out for 12 weeks now, Rodgers confirmed during his pre-match press conference, and Nampalys Mendy should start at the base of the midfield in his absence.

James Maddison is now fully fit and raring to go, meaning he should start in the Premier League for the first time this term. Maddison ought to be partnered by Dennis Praet, who pips Youri Tielemans to the spot after a strong start to the season.

Cengiz Under is still not available after completing his move from AS Roma. As a result, Ayoze Perez should be deployed on the right side of the Leicester City attack, with Harvey Barnes a certainty on the left wing. Finally, there is no looking past Jamie Vardy to lead the line for the Foxes against Manchester City. 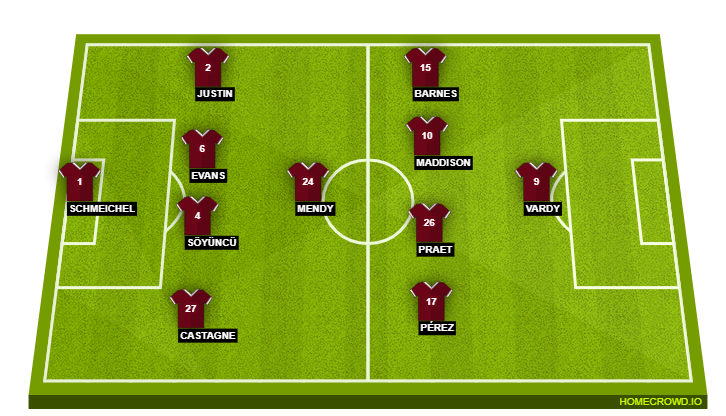 Pep Guardiola is down to his bare bones, with his primary source for goals missing through injury. Now, just one of his regular scorers remains at his disposal, that man being Raheem Sterling. The English international has been a player transformed under Guardiola, adding more goals to his game by each passing season.

The 25-year-old was well off his best over the course of the 2019/20 season. Yet, he had a career-best return of 31 goals in 52 appearances. If Sterling can manage to regain his peak form, he has what it takes to fill the void of Sergio Aguero up top in the Manchester City attack.

Sterling’s form will also hold the key if Manchester City are to meet their objectives for the 2020/21 season. That starts with a match-defining performance against Leicester City on Sunday, complete with his first goal of the campaign. Will the English international manage to rediscover his best?

The 2020/21 Premier League season might still be in its infancy, but Leicester City have done well to challenge the notion that last term’s top four challenge was just a one-off. Manchester City, on the other hand, gave a reminder that they are still a side to be taken seriously following a 3-1 win over Wolves in Gameweek 2.

Sunday’s game, though, will be a huge test of the two teams’ credentials. With both sides missing pivotal players, Pep Guardiola and Brendan Rodgers will believe that their opposition is ripe for the taking. However, the absence of Wilfred Ndidi could be more telling than that of Sergio Aguero, Gabriel Jesus and Aymeric Laporte.

Having said that, Laporte’s potential unavailability means Leicester should be in the game right till the end. With that in mind, The Hard Tackle predicts a 2-1 win for Manchester City, with Leicester suffering their first Premier League defeat of the season.