Manchester United will look to record their first Premier League win of the season when they take on Brighton & Hove Albion on Saturday.

The games continue to come thick and fast all across Europe, with most teams in England playing twice a week at the onset of the season. Gameweek 3 of the 2020/21 Premier League begins on Saturday, with Manchester United in action first up, as they lock horns with Brighton & Hove Albion at the Amex Stadium.

Brighton have made a solid start to the season, impressing in just about every game they have played so far. The Seagulls began their 2020/21 campaign with a 3-1 loss to Chelsea, a game in which they ran the Blues close before being defeated. Since then, Graham Potter’s men have won three successive games.

These victories include the 3-0 hammering of Newcastle United in the Premier League last week, with the other two coming in the Carabao Cup. The most recent win, a 2-0 success at Preston North End set up a fourth round date with their opponents on Saturday, Manchester United.

The Red Devils kicked off their 2020/21 season late after being afforded extra days off due to their excursions in the UEFA Europa League. Their rustiness was visible in their opening match of the Premier League campaign, wherein they suffered an embarrassing 3-1 loss to Crystal Palace. But, Manchester United bounced back in the Carabao Cup this week, beating Luton Town 3-0.

The corresponding fixture last season ended in a comfortable 3-0 win for Manchester United, with Bruno Fernandes and Mason Greenwood being the stars of the show. Ahead of the latest meeting between the two sides, The Hard Tackle takes a closer look at the encounter.

Florin Andone (R) will play no part for Brighton against Manchester United due to his struggles with a knee injury. (Photo by Gareth Copley/Getty Images)

Graham Potter does not have any fresh fitness troubles hampering his preparations ahead of the visit of Manchester United. On Saturday, the Brighton & Hove Albion manager will be bereft of the services of three first-team players due to injury issues, while Yves Bissouma is suspended.

Bissouma will be serving the second of his three-match ban against Manchester United after being sent off against Newcastle United last weekend for kicking Jamal Lewis in the face. Meanwhile, the Brighton players who are in the treatment room are Christian Walton (ankle), Jose Izquierdo (knee) and Florin Andone (knee).

Mat Ryan is the undisputed choice in goal for Brighton and will hope to add to Manchester United’s frustrations with a stellar display between the sticks on Saturday. In front of him, Potter will line Brighton up in a 3-4-3 formation, with Ben White, Adam Webster and captain Lewis Dunk being deployed in the back-three.

In midfield, Potter can no longer call upon Dale Stephens after the 31-year-old completed his long-awaited switch to Burnley. And, with Yves Bissouma unavailable, Steven Alzate ought to have Davy Propper as his partner in the double pivot, with Adam Lallana missing out. Out wide, Solly March and the fit-again Tariq Lamptey should form the wing-back pairing for Brighton.

Finally, up front, the slight change in system seemed to make the attack more dynamic, with Neal Maupay and Leandro Trossard starting as wingers before veering infield to create overloads centrally along with Aaron Connolly. The trio should pose a great deal of threat to a Manchester United defence that was shaky at best last weekend. 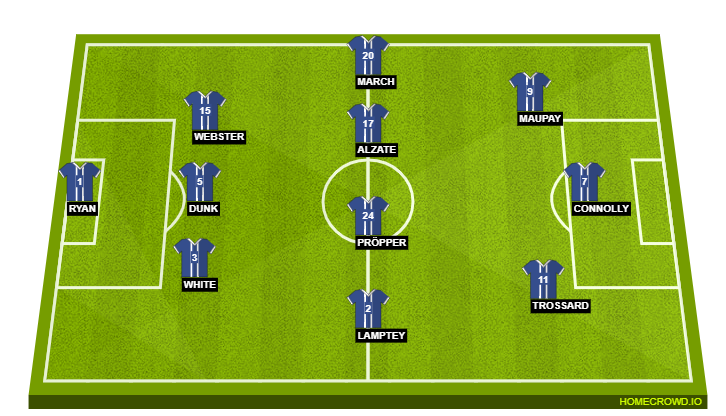 Unlike his counterpart in the Brighton & Hove Albion dugout, Ole Gunnar Solskjaer hardly has any pressing issues ahead of his side’s trip to the Amex Stadium. On Saturday, the Manchester United manager will only be without two first-team players, with Axel Tuanzebe and Phil Jones recovering from their long-term issues.

Solskjaer made wholesale changes to his side for the Carabao Cup third round tie at Luton Town, with captain Harry Maguire the only player to retain his spot in the side. For his team’s second Premier League game of the season, the Manchester United boss should revert to nearly the same side that plummeted to a 3-1 loss to Crystal Palace last weekend.

One of  three changes to that side should see Eric Bailly replacing Victor Lindelof as Maguire’s partner at the heart of the Manchester United defence. The Ivorian received a lot of praise from Solskjaer during his pre-match press conference; and with Lindelof being a train wreck against Palace, Bailly could be given an extended run in the side.

A second change in defence will have Aaron Wan-Bissaka coming in for Timothy Fosu-Mensah in the right-back slot, with Luke Shaw starting on the opposite flank. In goal, David de Gea ought to start ahead of Dean Henderson, despite the Englishman’s solid display in the cup fixture.

Up ahead in midfield, Scott McTominay and Paul Pogba are expected to be paired in the double pivot. McTominay will shield the backline, while Pogba will look to pull the strings and link up with Bruno Fernandes and the Manchester United attack.

Fernandes will have a free role and will roam all around the pitch in order to find pockets of space before looking to set up the front men. Speaking of, Marcus Rashford and Mason Greenwood will be the two wide men for Manchester United while Anthony Martial will spearhead the attack against Brighton.

Getting to the next level is imperative for Marcus Rashford. (Photo by Catherine Ivill/Getty Images)

Since Ole Gunnar Solskjaer arrived at Manchester United in a managerial capacity, one player who has been completely transformed is Marcus Rashford. Now an explosive winger with an eye for a defence-splitting pass, Rashford is becoming a complete attacker, who can contribute one way or another to a goal.

His link-up with Anthony Martial and Paul Pogba has been a stuff of delights, with the Englishman also starting to gel in with Bruno Fernandes. But, upon returning from a back injury, Rashford’s finishing abilities seem to have taken a hit, although he showed signs of improvement against Luton Town earlier this week.

If Manchester United are to build on a strong end to the 2019/20 season, Rashford will need to continue making massive upgrades to his game. That starts with the fixture against Brighton & Hove Albion, with United looking to kick-start their 2020/21 Premier League campaign.

Before the 2020/21 Premier League season began, Manchester United were touted to make a solid start to their campaign. However, after an abysmal performance against Crystal Palace last week, the dynamics seem to have changed. With their unbeaten run in the Premier League being snapped, the Red Devils’ stock has taken a bit of a hit, despite the riches at Ole Gunnar Solskjaer’s disposal.

Brighton, on the other hand, look to be primed to move up the table this term, playing an eye-catching brand of football while appearing to be solid at the back. With Solskjaer’s men still coming up to speed in the early stages of the season, this is a match that can easily go either way.

Having said that, it looks like some of the Manchester United players have made progress, with Mason Greenwood, Marcus Rashford and Bruno Fernandes impressing off the bench at Luton in the Carabao Cup third round tie. With that in mind, The Hard Tackle predicts a narrow win for the visitors, in what should be an engrossing contest.