Chelsea will be hoping to seal a place in the Carabao Cup fourth round when they welcome Barnsley to Stamford Bridge on Wednesday.

The Carabao Cup has moved into the third round of the 2020/21 season, with the big names in the Premier League turning out in the competition for the first time this term. Manchester United were the first of the ‘Big Six’ sides to take the field, on Tuesday, and up next are Chelsea, who will play hosts to Barnsley at Stamford Bridge on Wednesday night.

Chelsea entered the 2020/21 season full of hope and promise after a busy summer transfer window, wherein they have bought a number of top class players. The Blues made a fine start to their Premier League campaign, dispatching Brighton & Hove Albion 3-1. This past weekend, though, Frank Lampard & co. were brought right back down to earth following their 2-0 loss to Liverpool.

For Barnsley, on the other hand, 2020/21 has thus far been a tale of two competitions. While in the Carabao Cup, the Tykes have a perfect record after beating Nottingham Forest and Middlesbrough in the first two rounds, their fortunes have been polar opposite in the Championship, going down to Luton Town and Reading without even managing to find the back of the net.

Barnsley were shock 1-0 winners the last time they locked horns with Chelsea, beating their much fancied opponents in the FA Cup sixth round back in March 2008. Ahead of the latest meeting between the two sides, The Hard Tackle takes a closer look at the encounter.

Frank Lampard has seen his squad’s injury woes reduce considerably ahead of his side’s first game in the Carabao Cup this season. Against Barnsley on Wednesday, the Chelsea manager will only have one first-team player remaining on the sidelines due to fitness issues, with Billy Gilmour recovering from a knee injury.

Lampard has confirmed that Thiago Silva and Ben Chilwell will be a part of the matchday squad against Barnsley. Neither player is expected to start on Wednesday, though, with the Chelsea boss expected to ease them into the side slowly. Christian Pulisic and Hakim Ziyech have rejoined training, but the game has come too soon for them.

Finally, the only other player who remains unavailable for Chelsea is Andreas Christensen, having been sent off against Liverpool this past weekend. With Silva unlikely to start and Kurt Zouma expected to receive rest, Antonio Rudiger and Fikayo Tomori should pair up at the heart of the Chelsea defence. Tomori, who has been linked with a move to Everton, will be keen to impress.

Out wide, Cesar Azpilicueta is a certainty to return and start as the right-back, with Emerson Palmieri getting a rare start on the left flank. Chelsea’s defensive line will provide cover to Willy Caballero, who, Lampard confirmed during his pre-match presser, will take his place between the sticks against Barnsley.

Jorginho was taken off with over 10 minutes to go against Liverpool and should start once again when Chelsea take on Barnsley. The Italian international, though, will have two new partners in the midfield, with Ruben Loftus-Cheek and Ross Barkley.

Meanwhile, Kai Havertz, who has made a slow start to life as a Chelsea player, was subbed off at half-time this past weekend and should be a part of the three-pronged attack. This front trio will likely include Callum Hudson-Odoi and Tammy Abraham, both of whom need a chance to impress.

Much like his counterpart in the Chelsea dugout, Gerhard Struber is hardly hampered by injury issues in his squad. On Wednesday in the Carabao Cup third round tie, the Barnsley manager will be without just three first-team players, with Mads Andersen, Michal Helik and Bambo Diaby being the three absentees for the visitors.

Struber ought to line his side up in a 3-4-1-2 formation against Chelsea as well, with the objective being to get men in behind the ball and remain compact in order to deny Chelsea any space in the final third. Jack Walton is the obvious pick in goal, with the 22-year-old likely to be a busy man on Wednesday.

In front of Walton, Struber’s options are limited. Michael Sollbauer will be the only constant in the three-man central defensive unit, with Aapo Halme and Ali Omar expected to get a start against Chelsea. Killian Ludewig and Jordan Williams will form the wing-back pairing for Barnsley.

Captain Alex Mowatt will have Marcel Ritzmaier for company in the middle of the park. The duo will need to keep things tight in the middle of the park. Luke Thomas will be deployed in the advanced midfield slot and the onus will be on him to provide the creative push when the chance presents itself. Dominik Frieser and Patrick Schmidt will form the striker partnership for Barnsley. 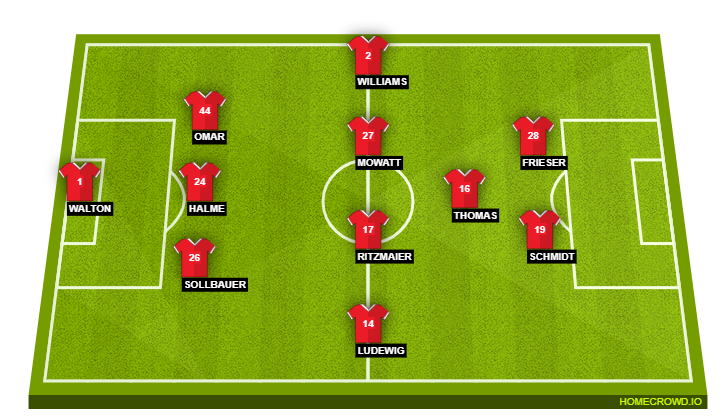 Eager to bounce back. (Photo by Laurence Griffiths/Getty Images)

It has been a frustrating start to the 2020/21 season for Cesar Azpilicueta, who has only managed to rake in a mere five minutes so far in two games. With Reece James seemingly ahead of him in the pecking order, the Chelsea captain will be raring to make an impression on Frank Lampard.

That Ben Chilwell ought to be the long-term left-back option means that Azpilicueta has an uphill task ahead of him in order to not just usurp Reece James but also retain his spot ahead of the burgeoning youngster. It all starts with the visit of Barnsley on Wednesday and Azpilicueta will be eager to make a mark in the Carabao Cup third round.

When it comes to Chelsea, stability is surely not the name of the game. The Blues have once again made a roller-coaster of a start to a season, but the visit of a struggling Barnsley side presents them with just the opportunity they need to kick-start their 2020/21 campaign with a bang.

This game will also give Kai Havertz a chance to make a name for himself, while Thiago Silva and Ben Chilwell should introduce themselves in Chelsea colours. The likes of Tammy Abraham, Cesar Azpilicueta and Callum Hudson-Odoi will be desperate to stamp their authority on the game too and we reckon all that points towards a comfortable Chelsea win.

Expect the Blues to roll over Barnsley in the Carabao Cup third round, although the visitors could find a way past a vulnerable Chelsea backline once. The Hard Tackle predicts a 3-1 win for Frank Lampard & co. on Wednesday.