Juventus will hope to kickstart their Serie A title defence in style when they begin their 2020/21 campaign against Sampdoria on Sunday.

The last of the top leagues in Europe is set to get going, with the curtains rising on the 2020/21 Serie A this weekend. Reigning champions Juventus will be in action for the first time this term on Sunday, when they play hosts to Sampdoria at the Allianz Stadium on Sunday evening.

The past decade in the Serie A belonged almost entirely to Juvenuts, who have won each of the last nine league titles. However, for a second successive season, the Bianconeri head into a new term under new management following the arrival of Andrea Pirlo as Maurizio Sarri’s replacement.

This season, the objective for Pirlo and Juventus will be to play an eye-catching brand of football while retaining the Serie A title and going deep into their UEFA Champions League campaign. Their opponents on Sunday are Sampdoria.

The Blucerchiati had a difficult 2019/20 campaign, wherein they flirted with possible relegation. In the end, however, Claudio Ranieri & co. managed to retain their Serie A status quite comfortably. Sampdoria have been fairly active in the transfer market this summer and will hope to move up the Italian football ladder, as a result.

The corresponding fixture last season ended in a 2-0 win for Juventus, courtesy goals by Cristiano Ronaldo and Federico Bernardeschi. Ahead of the latest meeting between the two sides, The Hard Tackle takes a closer look at the encounter.

Paulo Dybala misses out due to injury. (Photo by Emilio Andreoli/Getty Images)

Andrea Pirlo does not have a full strength squad at his disposal for his first Serie A game in-charge of Juventus. Against Sampdoria on Sunday, the Italian tactician will be without as many as four first-team players due to various fitness issues.

While Matthijs de Ligt is unavailable due to his ongoing recovery from a shoulder surgery, Alex Sandro is out with a thigh complaint. The other two absentees for Juventus are attacking players, with Federico Bernardeschi and Paulo Dybala dealing with thigh-related problems of their own.

Pirlo is expected to line Juventus up in a 3-5-2 formation, having previously admitted that he is drawing inspiration from Antonio Conte, as far as his style of play is concerned. In goal, Wojciech Szczesny is an automatic pick and will hope to start the season with a clean sheet.

In front of him, Pirlo could make one interesting pick in the three-man central defensive unit. While Leonardo Bonucci and Giorgio Chiellini seem to pick themselves, the third man at the back is expected to be Danilo, who starts as a makeshift centre-back but should act as a withdrawn right-back when Juventus are in the offensive phase.

Up ahead in midfield, Pirlo will have a big decision to make. Aaron Ramsey, who seemed to have an uncertain future at Juventus, should be one of the three midfielders, with Adrien Rabiot likely to start as well. Rodrigo Bentancur ought to play the Anchor Man role, with summer arrivals Weston McKennie and Arthur getting their chances off the bench.

The formation will afford the wing-backs a lot of time and space in the final third and Juan Cuadrado is just the player to exploit this. On the left wing, Luca Pellegrini will get a chance to impress. Finally, in attack, Cristiano Ronaldo will be the key man for Juventus, with Dejan Kulusevski providing support. 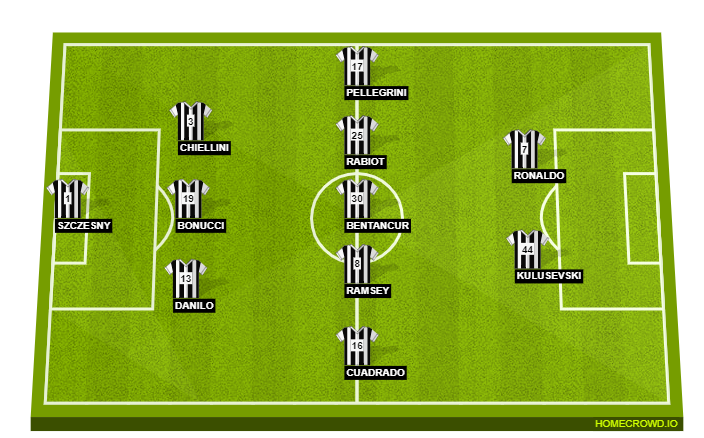 Unlike his counterpart in the Juventus dugout, Claudio Ranieri hardly has any fitness issues hampering his preparations ahead of his side’s season-opening Serie A fixture. On Sunday, the Sampdoria manager will be without just three first-team players.

Manolo Gabbiadini is the major absentee for Sampdoria, with the Italian striker struggling to recover from a groin issue. In his absence, Federico Bonazzoli will likely get the nod to pair up with Fabio Quagliarella in the strike partnership. Meanwhile, Kristoffer Askildsen and Antonio Palumbo are suspended.

Ranieri ought to employ the 4-4-2 formation against Juventus on Sunday, with Emil Audero taking his place between the sticks. The former Juventus goalkeeper will be protected by a back four that will comprise of Maya Yoshida and Omar Colley as the centre-backs, with Tomasso Augello and Bartosz Bereszynski being the full-back pairing.

Finally, in midfield, the key players for Sampdoria will be Albin Ekdal and Jakub Jankto. Ekdal will be tasked with providing cover to the backline while Jankto will have more creative responsibilities on him. Fabio Depaoli will look to provide width on the right flank while Morten Thorsby will give defensive support to Ekdal while also looking to transition from defence to attack quickly. 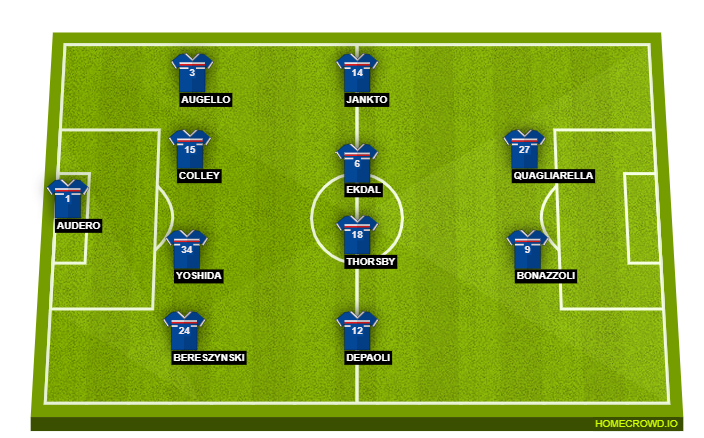 The man for all seasons. (Photo by Tullio M. Puglia/Getty Images)

Who else but that man Cristiano Ronaldo? There appears to be no stopping the relentless forward, who nearly finished as the Serie A top scorer last term. If Juventus are to continue their successful run in the top-flight, the Portuguese will need to be at his best yet again this season.

Sampdoria have been one of his most favourite opponents in Serie A, having scored in each of the three games he has played against them. However, Ronaldo has not scored on the opening weekend of a Serie A season so far. Can he break his duck by extending his fine record against Sampdoria? Ronaldo will surely fancy his chances.

Juventus are set to begin a new phase, as Andrea Pirlo gets ready to take charge of his first Serie A match. In such a scenario, the opposition could fancy their chances. But, the early signs under the new manager have been nothing but positive.

Sampdoria, on the other hand, have a decent enough record against Juventus in the past decade or so, but have struggled to get the better of the Bianconeri at the Allianz Stadium. Having said that, with Cristiano Ronaldo still on top of his game, this should be a rather straightforward evening for Juventus, which is why we are predicting a 3-1 win for the defending champions.