Arsenal will look to continue the perfect start to their 2020/21 Premier League campaign when they welcome West Ham United to the Emirates on Saturday.

It is still early days in the 2020/21 Premier League season and we are already into the second round of fixtures. This time around, it’s a full gameweek, with all 20 teams set to take the field. Early leaders Arsenal will close the proceedings on Saturday, when they play hosts to West Ham United at the Emirates.

Arsenal have been in the middle of a transitional period since the turn of the year. With Mikel Arteta at the helm now, positive changes have been seen at the Emirates and the club seems to be headed in the right direction, despite off-field issues.

Winning the FA Cup and the FA Community Shield seems to be the Gunners’ first definitive step back towards the upper echelons of English football. Arsenal kicked off their 2020/21 Premier League campaign with a bang as well, handily beating newly-promoted Fulham 3-0 last week.

West Ham United, on the other hand, began their season on a whimper, going down 2-0 at home to Newcastle United in gameweek 1. David Moyes will hope that a story similar to recent seasons, wherein the Hammers have vigorously blown hot and cold, does not unfurl this time around and will be eager to quickly find stable footing.

The corresponding fixture last season saw Arsenal narrowly eking out a 1-0 win over West Ham, courtesy a 78th minute strike by Alexandre Lacazette. Ahead of the latest meeting between the two sides, The Hard Tackle takes a closer look at the Premier League encounter.

David Luiz is fit and in contention to start for Arsenal against West Ham United. (Photo by Michael Regan/Getty Images)

Mikel Arteta has seen his squad’s injury troubles ease up considerably ahead of his side’s second Premier League game of the season. Against West Ham United on Saturday, the Arsenal manager will only be without six first-team players.

The players who do miss out for the hosts are Sokratis Papastathopoulos (thigh), Calum Chambers (knee), Shkodran Mustafi (thigh), Pablo Mari (ankle), Emile Smith Rowe (shoulder) and Gabriel Martinelli (knee). However, the good news for Arsenal is that David Luiz has rejoined full training and is in contention to start against West Ham.

Arteta, though, ought to give the veteran Brazilian ample time to regain his sharpness, especially in the wake of Gabriel Magalhaes’s impressive debut last weekend. The same holds true for William Saliba, who is expected to be only gradually eased into the scheme of things by Arteta. So, Gabriel should be partnered by Rob Holding and Kieran Tierney in the back-three once again.

Consequently, Hector Bellerin and Ainsley Maitland-Niles will likely continue as the wing-backs, with Bernd Leno keeping his place in goal. The big decision this weekend for Arteta will need to be made with respect to his midfield selection.

Granit Xhaka picked up a knock last time out and the Arsenal manager has since been sweating over the fitness of the Swiss midfielder. However, the team news section of the Arsenal website has no mention of a possible injury issue, meaning Xhaka should be available to take on West Ham.

If that were to be the case, Xhaka will once again have Mohamed Elneny as his partner in the middle of the park, with Dani Ceballos on the bench. Finally, in attack, there is no looking past Willian, Alexandre Lacazette and Pierre-Emerick Aubameyang, meaning Nicolas Pepe and Eddie Nketiah miss out.

Unlike his counterpart in the Arsenal dugout, David Moyes hardly has any fitness issues hampering his preparations ahead of the short trip to the Emirates. On Saturday, the West Ham United boss will only have a couple of players unavailable in the worst case scenario.

Mark Noble faces a late fitness test after missing training on Friday due to a toe injury. Former Arsenal midfielder Jack Wilshere is a major doubt as well, as he recovers from an ankle complaint and could miss the trip to his former stomping ground.

Noble’s potential unavailability means Moyes could potentially change his formation to a 4-4-2 unless he chooses to give Manuel Lanzini a rare Premier League start. An alteration in the system, though, appears to be the more ideal solution, especially in the wake of Sebastien Haller’s impressive performance in the Carabao Cup second round win over Charlton Athletic this week.

Haller should be a part of the striker partnership along with Michail Antonio, who will drop deep to link up with the midfielders during build-up play while his partner remains up top. Jarrod Bowen is a certain starter on the right wing, while Felipe Anderson is in line to start in the Premier League for the first time this season after making an impression in the cup fixture.

In the middle of the park, the onus will be on Declan Rice to keep things tight and curb the influence of Willian, who will have a free role in West Ham’s defensive third. Rice will be partnered by Tomas Soucek, who will look to charge up the field during offensive transitions.

At the back, there is no looking past Issa Diop and Angelo Ogbonna in the central defensive tandem while Ryan Fredericks and Aaron Cresswell will form the full-back pairing. In goal, former Arsenal custodian Lukasz Fabianski is the automatic pick, with the Pole likely to be a busy man between the sticks on Saturday. 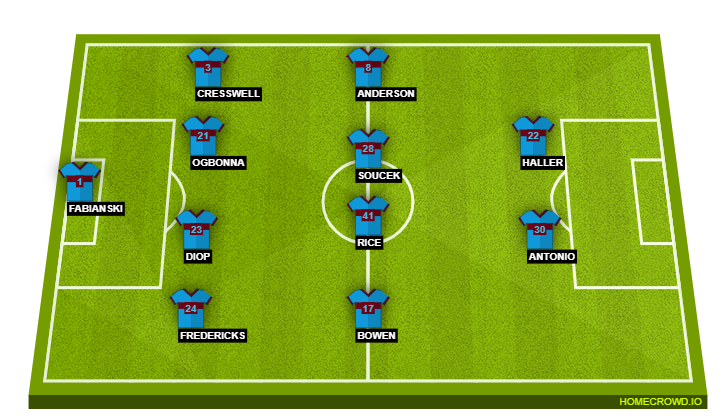 Who else but Pierre-Emerick Aubameyang in a week when he has signed a new bumper deal with Arsenal. Now one of the best-paid players in the Premier League, the Arsenal captain will be raring to go, having seen all the air of uncertainty around his future dissipating for good.

The focus for Aubameyang will now be to continue doing what he does best – turn up in the box and find the back of the net. Last weekend, he could have easily had a larger haul, had things gone his way. With Mohamed Salah taking an early lead in the Golden Boot race, Aubameyang will be keen for a big performance, not just to celebrate the Arsenal renewal but also to close the gap on Salah.

This is a match between teams that appear to be on the opposite end of the spectrum as far as stability in the squad is concerned. Under Mikel Arteta, Arsenal seem to be a happy bunch and are going from strength to strength. West Ham United, on the other hand, have made a shoddy start to the season to betray the expectations set at the onset of the campaign.

That Arsenal have constantly improved at the back only goes to hold them in good stead for the game on Saturday. On the opposite end of the pitch, West Ham looked shaky against Newcastle United and with Willian making an electric start to his Arsenal career, another difficult evening awaits the Hammers’ defence.

Expect Arsenal to steamroll West Ham on Saturday, with Pierre-Emerick Aubameyang playing a prominent role in the win. The Hard Tackle predicts a 3-0 win for Mikel Arteta & co. in a result that would see West Ham fail to win either of their opening two league fixtures for a fourth successive Premier League campaign.