AC Milan will hope to book their place in the third qualifying round of the UEFA Europa League when they face Shamrock Rovers in Dublin on Thursday.

The 2020/21 season is underway in most of Europe and that means we are getting closer to the start of the two European competitions. As far as the UEFA Europa League is concerned, we are into the second qualifying round and one of the intriguing fixtures will have Shamrock Rovers playing hosts to AC Milan at the Tallaght Stadium in Dublin on Thursday.

Unlike most teams set to play some form of European football, Shamrock Rovers have already been playing competitive football for months now. After the first eleven fixtures, Stephen Bradley’s men sit atop the Ireland Premier League table. As for the Europa League, Shamrock beat Finnish side Ilves FC on penalties to progress to the current stage of the qualification process.

AC Milan, on the other hand, will be playing their first game of the 2020/21 season, with the Serie A yet to begin. The Rossoneri have looked in promising touch since football resumed in Europe post the lockdown, ending their 2019/20 campaign on a positive note to achieve a sixth-placed league finish and a return to the Europa League.

A Zlatan Ibrahimovic-led AC Milan ended 2019/20 on a high. (Photo by Miguel Medina/AFP via Getty Images)

Shamrock Rovers and AC Milan will be squaring off for the very first time in their history and ahead of their first ever meeting, The Hard Tackle takes a closer look at the encounter.

Stephen Bradley does not have many fitness issues hampering his preparations ahead of the UEFA Europa League qualification game. Against AC Milan on Thursday, the Shamrock Rovers manager will be without just one first-team player, with Greg Bolger recovering from an injury.

Bradley has preferred using some form of the 3-4-3 formation for the most part so far this season and should line his side up in a 3-4-2-1 formation, which will transform into a 5-4-1 in the defensive phase of the game.

In goal, there is no looking past Alan Mannus, who ought to be a busy man between the posts for Shamrock Rovers. Ahead of him, Liam Scales is unavailable due to suspension, meaning the back-three should have Joey O’Brien, Lee Grace and Roberto Lopes, with the trio looking to remain compact to deny AC Milan space between the lines.

Ronan Finn and Danny Lafferty are expected to be the wing-back duo for the hosts, with the pair alternating between charging forward down their flank and staying back. Gary O’Neil will likely be the player tasked with providing cover to the backline, while Aaron McEneff will be the deep lying playmaker for Shamrock.

The creative impetus, though, will rest on Jack Byrne and Graham Burke, with the duo looking to pull the strings from advanced positions on the pitch. Finally, Aaron Greene will lead the line for Shamrock Rovers against AC Milan. 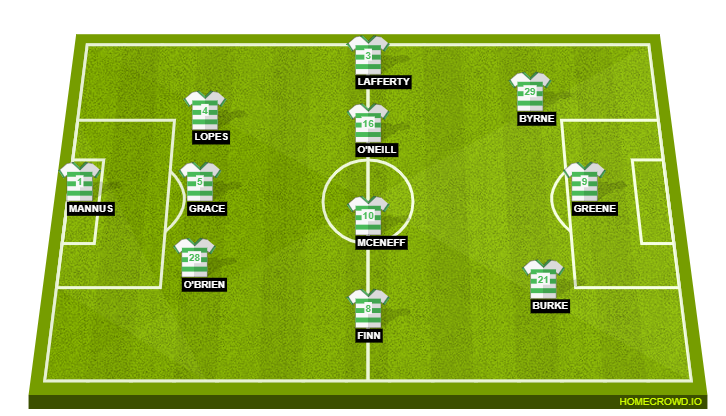 Unlike his counterpart in the Shamrock Rovers dugout, Stefano Pioli has a few roster issues on his hands ahead of his side’s first game of the season. In the UEFA Europa League qualifier, the AC Milan boss will be bereft of the services of five first-team players due to injuries and suspension.

The big absentee for the visitors is Ante Rebic, who is suspended, while Rafael Leao, Andrea Conti, Alessio Romagnoli and Mateo Musacchio miss out as well. Meanwhile, Lucas Paqueta has been left out of the travelling squad by Pioli, with the Brazilian reportedly edging closer to a switch to Ligue 1.

However, there is some good news, with Zlatan Ibrahimovic fit enough to make it to the squad. The veteran Swedish striker had missed the last two friendlies that AC Milan played, but returned to training this week and is expected to start against Shamrock Rovers.

Ibrahimovic will spearhead the attack for AC Milan, who are expected to line up in a 4-2-3-1 formation against Shamrock Rovers. With Rebic and Leao unavailable, Alexis Saelemaekers ought to line up on the left flank, with Samu Castillejo deployed on the right wing. Hakan Calhanoglu will be the creative force for Milan, reprising the no. 10 role.

The key for AC Milan will be their strength in midfield, with Ismael Bennacer and Franck Kessie continuing their fine partnership. Meanwhile, in the absence of Romagnoli and Musacchio, Simon Kjaer and Matteo Gabbia will form the central defensive partnership, with Davide Calabria and Theo Hernandez being the full-back pairing. Gianluigi Donnarumma will be the man in goal. 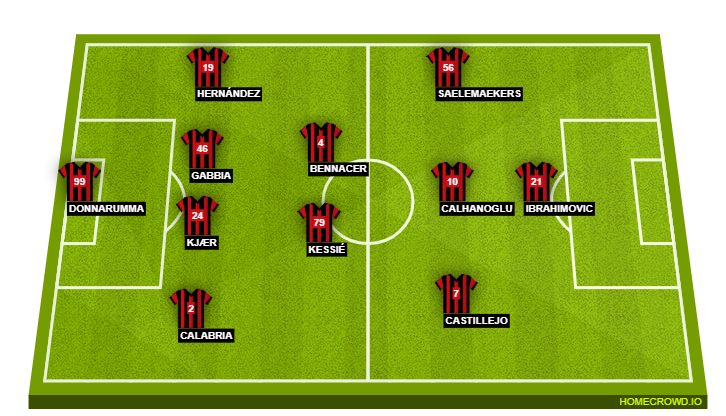 Without a doubt the biggest player participating in the UEFA Europa League qualifiers. Heading into the 2020/21 campaign, Zlatan Ibrahimovic will be eager to enjoy a solid campaign, both on a personal level and in respect to AC Milan, who showed a lot of promising signs at the tail end of last season.

Having shown that he still has the fire burning within him despite inching closer to the 40-year-old mark, Ibrahimovic will look to begin his campaign on a solid note. Shamrock Rovers will provide a stiff test, but the Swedish striker will hope to get the job done for his side.

On most days, one would back AC Milan to walk all over Shamrock Rovers, especially considering the way they ended 2019/20. However, it is important to note that Milan have not played a single competitive fixture this season while Shamrock Rovers are in the middle of their league campaign.

So, a closely contested affair is a prudent expectations from this game, something Stephen Bradley is confident of as well. Having said that, the gulf in quality should help AC Milan get over the line unscathed, which is why The Hard Tackle is going with a 2-1 win for Stefano Pioli & co. on Thursday.