A place in the third round of the Carabao Cup will be up for grabs when Southampton welcome Brentford to St. Mary’s in a second round tie on Wednesday.

The 2020/21 season might be in its early stages in England, but the games are coming thick and fast for clubs, particularly those at the lower rung of English football. This midweek belongs to the Carabao Cup, with the second round already underway. On Wednesday, one of the games will have Southampton play hosts to Brentford at St. Mary’s.

Southampton came into the 2020/21 season full of promise and hope after ending last term in solid fashion. However, the Saints faced a leveller in the form of a 1-0 defeat to Crystal Palace in their season-opening Premier League fixture last weekend. Ralph Hasenhuttl & co. will now be eager to bounce back quickly to begin their Carabao Cup campaign on a positive note.

Brentford, on the other hand, ended last season in agonising fashion, having come close to sealing a place in the Premier League. The Bees, though, faltered at the tail end of their playoffs run and will spend at least one more campaign in the Championship. Like Southampton, Brentford lost their first league game, but they did defeat Wycombe Wanderers in the Carabao Cup first round.

Southampton were 3-0 victors the last time they took on Brentford, in a League One contest all the way back in 2011. Ahead of the latest meeting between the two sides, The Hard Tackle takes a closer look at the Carabao Cup encounter.

Sofiane Boufal will be unavailable for Southampton once again. (Photo by Mike Hewitt/Getty Images)

Ralph Hasenhuttl does not have any fresh injury concerns hampering his preparations ahead of the Carabao Cup second round fixture. Against Brentford on Wednesday, the Southampton manager will be without just one first-team player, with Stuart Armstrong recovering from a thigh injury.

In addition, Sofiane Boufal will likely be uninvolved once again, after Hasenhuttl admitted that he could leave Southampton this summer. Otherwise, the hosts are at full strength, with Hasenhuttl expected to shuffle his side around in a bid to keep his players fit and firing.

The first change should come in goal, with Fraser Forster taking his place between the sticks. A few alterations could be seen in defence as well, with Ryan Bertrand the only player keeping hold of his spot in the four-man backline.

The full-back will be joined by Yan Valery on the right flank, with Jannik Vestergaard and summer arrival Mohammed Salisu pairing up at the heart of the Southampton defence. Meanwhile, with a central midfielder still not signed to replace Pierre-Emile Hojbjerg, Oriol Romeu and captain James Ward-Prowse ought to continue in the midfield double pivot.

With Armstrong unavailable, Nathan Redmond will start again as well, with Hasenhuttl deploying him on the left wing. On the opposite side, Moussa Djenepo ought to start, providing support to the strike partnership, which should feature Shane Long and Michael Obafemi. 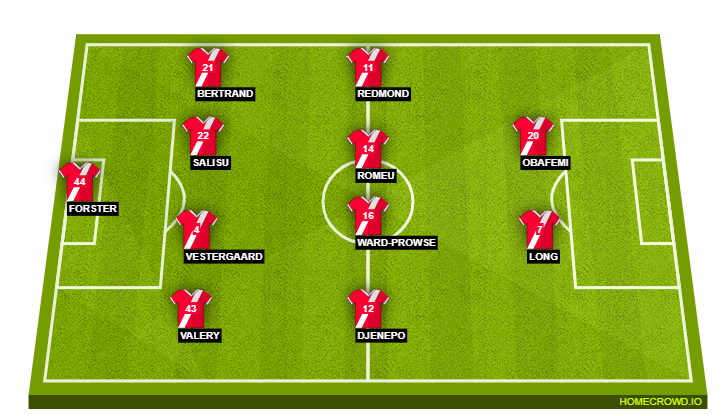 Unlike his counterpart in the Southampton dugout, Thomas Frank does not have any absentees whatsoever to contend with ahead of his side’s latest fixture. In the Carabao Cup second round tie, the Brentford boss boasts of a fully fit squad.

The only player who will not be at the disposal of Frank is talisman Said Benrahma, who has been linked with Crystal Palace in the last few days. The 25-year-old Algerian winger is expected to be allowed to complete a summer move away from Brentford and will, hence, not play a part against Southampton.

Meanwhile David Raya, who has reportedly been on Arsenal’s radar, and Mathias Jensen are minor doubts and will likely be rested, as Frank looks to keep his troops fresh. In Raya’s absence, Luke Daniels will be the man in goal for Brentford.

In front of Daniels, the visitors will line up in a 4-3-3 formation, with Pontus Jansson being the key man in the defensive line. Jansson will pair up with Ethan Pinnock at the heart of the Brentford defence, with Henrik Dalsgaard and Rico Henry being the full-back pairing.

Up ahead in midfield, Christian Norgaard will play the Anchor Man role, looking to restrict the output of James Ward-Prowse. Josh Dasilva will provide defensive support to Norgaard while Emiliano Marcondes is expected to be the third man in midfield, with the 25-year-old tasked with providing the creative impetus for Brentford.

Finally, in attack, Marcus Forss will likely lead the line against Southampton, with Bryan Mbuemo and Tariqe Fosu-Henry being the wide duo. Mbuemo is the only one of last season’s fearsome trio who will probably feature against Southampton and the onus will be on him to deliver the goods for Brentford in the Carabao Cup fixture. 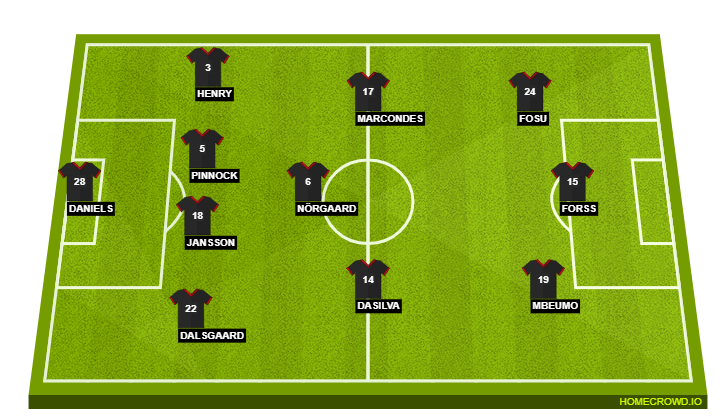 Ralph Hasenhuttl demands nothing but the absolute best in terms of fitness and work-rate from his players. Therefore, it is hardly surprising that Mohammed Salisu has been unable to find a place for himself in the starting lineup so far.

Having said that, a game in the Carabao Cup is just the kind of fixture Salisu needs to get up to the pace. In Brentford, he will face a side that has some very tricky players, meaning a strong showing could help boost his case in front of Hasenhuttl quicker.

A tricky one to call, this. Both Southampton and Brentford will come into this game by making a number of rotations. Such a decision can potentially throw the balance of the lineup completely at times.

However, Southampton have the edge over their visitors due to the fact that two of Thomas Frank’s best players last season will play no part in the Carabao Cup second round fixture. With that in mind, The Hard Tackle predicts a 2-1 win for Ralph Hasenhuttl’s men, at the end of a keenly contested affair.