Leicester City will look to kickstart their Premier League campaign with a bang when they take on West Bromwich Albion at the Hawthorns on Sunday.

The opening matchday of the 2020/21 Premier League season continues, with a couple of matches scheduled to take place on Sunday. The first of these two games will feature former champions Leicester City, as they lock horns with newly-promoted West Bromwich Albion at the Hawthorns.

West Bromwich Albion are back in the Premier League after being out in the wilderness that is the Championship for two seasons. The Baggies nearly made it to the top-flight after just one year, but had to wait a further season for their return, doing so by securing an automatic qualification spot last term.

Slaven Bilic will now hope West Brom can retain their Premier League status come May. Leicester City, on the other hand, have become a resident Premier League outfit for six years now. In that period, the Foxes have won a top-flight title as well before spending a few seasons trotting around as a mid-table club.

That all changed last season, with a fifth-placed finish last term, having been in and around the top four for pretty much the entire campaign. However, an underwhelming second half of the season meant that Leicester missed out on UEFA Champions League qualification and Brendan Rodgers will be eager to see his side turn their form around in 2020/21.

Leicester were 4-1 victors the last time they clashed with West Brom in a Premier League game at the Hawthorns, following Salomon Rondon’s early goal. Ahead of the latest meeting between the two sides, The Hard Tackle takes a closer look at the encounter.

Slaven Bilic has a near full strength squad at his disposal. (Photo by Ian Kington/AFP/Getty Images)

Slaven Bilic does not have any pressing injury concerns hampering his preparations ahead of his side’s first Premier League game of the season. Against Leicester City on Sunday, the West Bromwich Albion boss will only be without two first-team players in the worst case scenario.

Kenneth Zohore (calf) and Conor Townsend (ankle) both face late fitness tests to determine their availability and could well be available for West Brom. Neither player, however, is expected to start against Leicester, with Slaven Bilic having all his regulars available to him.

In goal, former Manchester United man Sam Johnstone is the obvious choice, with West Brom set to line up in a 4-2-3-1 formation ahead of him. In defence, former Leicester centre-back Cedric Kipre will have to wait a little to make his West Brom debut, with Semi Ajayi and Ahmed Hegazi expected to pair up in the central defensive partnership.

Ex-Arsenal defender Kieran Gibbs should be the left-back for the hosts, with Darnell Furlong likely to be deployed on the opposite flank. Up ahead in midfield, Jake Livermore will be tasked with keeping things tight in the middle of the park. The West Brom captain will likely have Romaine Sawyers for company in the double pivot, with young Rekeem Harper missing out.

Grady Diangana, Matheus Pereira and Callum Robinson have all joined West Brom permanently this summer and two of them should start against Leicester on Sunday, with Robinson expected to be on the bench. Pereira will be deployed in the hole and will look to pull the strings in advanced positions on the pitch.

Diangana will carry a lot of threat with his directness and will start on the left side of the West Brom attack, with Matt Phillips taking his place on the right wing. Finally, Charlie Austin will lead the line for the Baggies against Leicester, hoping to kickstart his Premier League campaign with a goalscoring display. 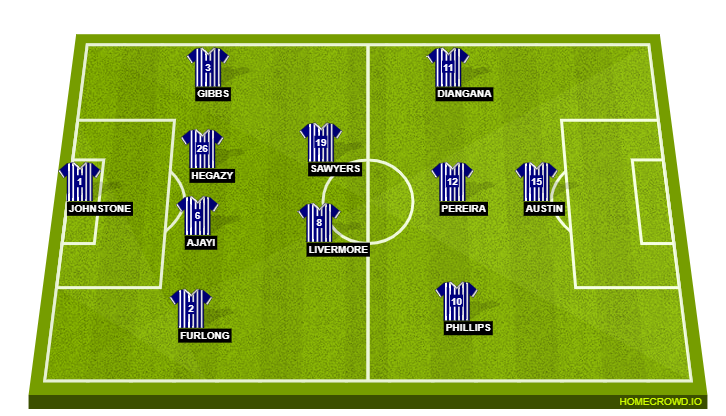 Unlike his counterpart in the West Bromwich Albion dugout, Brendan Rodgers has been sweating over the fitness of a number of players heading into Leicester City’s Premier League opener. On Sunday, the visitors could be without as many as five first-team players.

The good news, however, is that James Maddison is available after recovering from a hip injury that forced him to miss the run-in last season. Rodgers confirmed that the English midfielder has taken part in training and is expected to feature for Leicester against West Brom.

As far as making it to the starting lineup is concerned, the game has come too soon for Maddison, who should come off the bench for the Foxes. Meanwhile, the likes of Filip Benkovic (hip), Jonny Evans (thigh) and Ricardo Pereira (knee) are still on the sidelines, while Christian Fuchs and Wes Morgan will face late fitness tests to determine their availability, having rejoined training.

Morgan, though, could be rushed back against West Brom owing to the fact that Rodgers does not have any other natural centre-back at his disposal. To the Leicester manager’s relief, Caglar Soyuncu is available after serving his three-match ban and will start at the heart of the defence.

Ricardo’s absence means James Justin starts as the right-back. Summer signing Timothy Castagne should be Leicester’s left-back this season after Ben Chilwell joined Chelsea. Rodgers confirmed during his pre-match press conference that the Belgian is in contention to make his debut against West Brom; and he should pip Luke Thomas to start on the left side of the defence.

Up ahead in midfield, there is no looking past Wilfred Ndidi and Youri Tielemans in two of the three spots, with Dennis Praet expected to start in the absence of James Maddison. Finally, in attack, Jamie Vardy will be the key man once again. Vardy will be the central striker, flanked by Harvey Barnes and Demarai Gray. 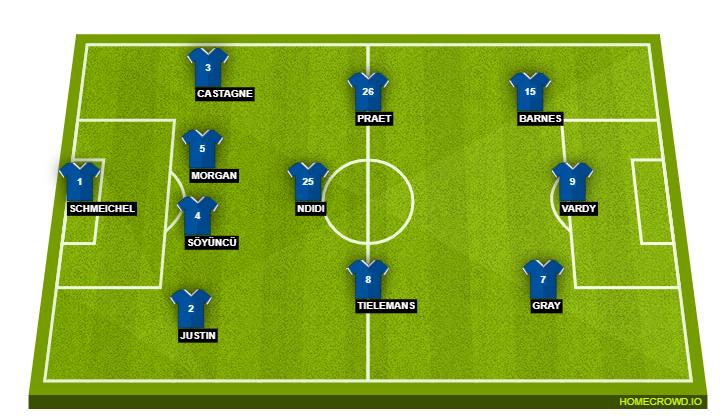 The 2019/20 Premier League Golden Boot winner will look to do a repeat this season. (Photo by Michael Regan/Getty Images)

One of few players who have been ever-present for Leicester City since their return to the Premier League over half-a-decade ago, Jamie Vardy has been a case of the classic Cinderella Story. From the depths of non-league football to becoming one of the best strikers in the continent, it has been quite a remarkable ascendancy.

Last season, he achieved a personal milestone by winning the Premier League Golden Boot. That his best form coincided with Leicester’s dream run in the first half of the season points towards just how crucial Vardy will be once again for his side this term. The veteran striker will be eager to get going from the very first weekend.

This one is set to be a nervy affair, despite the scoreline that we are going with. West Bromwich Albion will invariably put in a spirited display, with the incredible Matheus Pereira in tow. On the other hand, Leicester City are coming off a memorable campaign that ended on a poor note.

Shoddy form since the turn of the year suggests that Leicester could be in for a difficult campaign in the 2020/21 season. However, with James Maddison set to return against West Brom, the Foxes could bring on the style in the second half, with Jamie Vardy playing a key role as well.

Expect the game to be a closely-contested affair for much of the first hour or so before Leicester turn the tide and grab all three points. With that in mind, The Hard Tackle are going with a 3-1 win for Brendan Rodgers & co. to kick off their Premier League campaign.