Top spot in Group A1 of the UEFA Nations League will be up for grabs when Netherlands welcome Italy to the Johan Cruijff Arena on Monday.

The international break continues into its second and final week, with the blockbuster encounter of the week set to be played on Monday. It is Matchday 2 of the 2020/21 UEFA Nations League, with Netherlands set to play hosts to Italy at the Johan Cruijff Arena in the big Group A1 match-up.

Netherlands have been on a resurgent run since missing the boat to Russia for the 2018 FIFA World Cup. In nearly two years under the tutelage of Ronald Koeman, the Oranje progressed quite remarkably, reaching the UEFA Nations League final in its first edition as well.

Koeman, though, has since been appointed as the Barcelona manager, with Dwight Lodeweges taking temporary charge of the Dutch national side. In their first match under their interim boss, Netherlands were solid, beating Poland 1-0 last week. Italy, on the other hand, were off to a rather sub-par start, playing out a 1-1 draw with Bosnia and Herzegovina.

The Azzurri, though, have had a story similar to Netherlands in the last couple of years, slowly but surely bridging the gap to the best teams in the world. In fact, since Roberto Mancini took charge, Italy have lost just 2 of the 20 games they have played, winning 13 and drawing the remaining 5.

Nathan Ake scored a late equaliser when Netherlands and Italy last locked horns, as the teams played out a 1-1 draw. Ahead of the latest meeting between the two sides, The Hard Tackle takes a closer look at the UEFA Nations League encounter.

Stefan de Vrij will be unavailable for Netherlands against Italy due to injury. (Photo by Dean Mouhtaropoulos/Getty Images)

Dwight Lodeweges has chosen to retain almost all the major players that Ronald Koeman relied on during his time as the Netherlands head coach. The only ones missing out are forced omissions in Daley Blind, Matthijs de Ligt and Patrick van Aanholt. Meanwhile, Stefan de Vrij drops out due to injury.

The absence of de Vrij and de Ligt means Joel Veltman will pair up with Virgil van Dijk at the heart of the Netherlands defence once again. Nathan Ake and Hans Hateboer should continue as the full-back pairing, with Jasper Cillessen the automatic pick in goal.

Up ahead in midfield, new Manchester United player Donny van de Beek will be in contention to start. But, Maarten de Roon could get the nod over him yet again, with Frenkie de Jong sitting alongside him in the middle of the park, while Georginio Wijnaldum will take up more advanced positions on the pitch.

The key man for Netherlands, though, will invariably be Memphis Depay once more. Depay will start on the left side of the Dutch attack, with Steven Bergwijn, the goalscorer in the previous game, taking up the right wing slot. Finally, Luuk de Jong will lead the line for the Oranje against Italy. 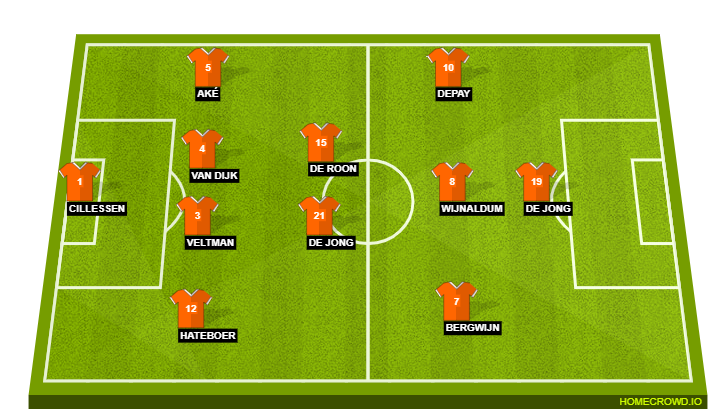 Much like his counterpart in the Netherlands dugout, Roberto Mancini has seen his squad being hit by injury. However, as far as Italy are concerned, the head coach has had to see more than one player dropping out, with Alessandro Bastoni, Gaetano Castrovilli and Federico Bernadeschi joining Domenico Berardi in withdrawing from the squad due to injuries.

Meanwhile, Luca Pellegrini has joined the under-21 squad instead of participating with the senior side. Despite all the withdrawals, though, Mancini has more than enough resources at his disposal to ensure Italy remain competitive against Netherlands in the Nations League encounter. In goal, Gianluigi Donnarumma, who will be eager to keep a clean sheet on Monday, picks himself.

In front of him, Italy will take up a 4-3-3 shape once again, with Giorgio Chiellini coming back into the lineup following a bizarre gaffe by Mancini last time out. The Italy captain’s return is likely to be the only change in the backline, with Leonardo Bonucci, Alessandro Florenzi and Cristiano Biraghi keeping their places.

Up ahead in midfield, the big bone of contention will be whether Mancini chooses to bring Jorginho back in the lineup. The Chelsea midfielder could indeed return, replacing Lorenzo Pellegrini, with Stefano Sensi moving into the no. 8 slot along with Nicolo Barella.

Finally, in attack, a couple of changes are expected, with Ciro Immobile and Nicolo Zaniolo coming in for Andrea Belotti and Federico Chiesa, respectively. Immobile will spearhead Italy’s attack against Netherlands, with Zaniolo and Lorenzo Insigne being the two wide men. 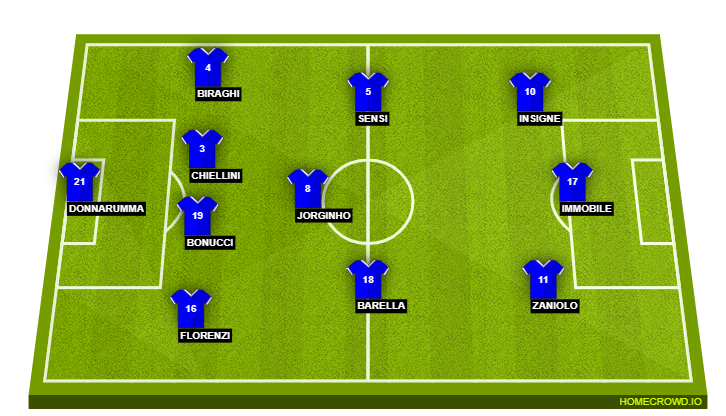 In a game that is laden with stars and consistent performers, picking out one Player to Watch is not a straightforward task. However, we have gone with Memphis Depay because of the kind of space he finds himself in, as far as transfer rumours are concerned, with Barcelona reportedly looking to sign him.

With a reunion with Ronald Koeman probably on the cards, Depay will be eager to impress. And, what better way to do so than an influential showing against a strong Italy side. Expect Depay to be back among the goals on Monday in order to potentially set Netherlands up for a positive result.

Neither side managed to be particularly convincing the last time they took to the field. Netherlands appeared to be rusty against Poland, although they did control the game thoroughly. Italy, on the other hand, were a tad bit nervy and need to be step up massively in Amsterdam on Monday.

Expect the hosts to take control of the game once again, but with Ciro Immobile returning to the starting lineup, the Oranje ought to have a battle on their hands. In the end, though, the presence of the indomitable Virgil van Dijk could be telling.

That is why we are predicting Netherlands to edge the tie narrowly while also ending Italy’s run of scoring a goal in 12 consecutive games. The Hard Tackle, therefore, predicts a 1-0 win for the hosts, who will then take a massive step towards confirming top spot in Group A1 of the UEFA Nations League.