Italy will be looking to kick off their UEFA Nations League campaign on a winning note when they take on Bosnia and Herzegovina in Florence on Friday.

International football resumes at long last, returning for the first time in 2020 following the cancellation of the schedules in March and June. The first bit of action in Europe comes with the second edition of the UEFA Nations League, complete with a revamped format with four teams in each of the League A groups.

Italy have been on a resurgent run under the tutelage of Roberto Mancini after missing out on the 2018 FIFA World Cup. Since then, they have gradually found stable footing and are unbeaten in 14 matches. The Azzurri’s last defeat was coincidentally in the Nations League, with eventual winners Portugal beating them 1-0 nearly two years ago.

Bosnia and Herzegovina, on the other hand, secured promotion to League A of the Nations League after finishing atop Group B3 in the first edition of the tournament. The Zmajevi, though, have been hit and miss as far as their recent results are concerned, having suffered four defeats in their last six games, one of them coming against Italy themselves.

Italy were 3-0 victors the last time they locked horns with Bosnia and Herzegovina, in a UEFA Euro 2020 qualifier, with Francesco Acerbi, Lorenzo Insigne and Andrea Belotti finding the back of the net. Ahead of the latest meeting between the two sides, The Hard Tackle takes a closer look at the Nations League encounter.

Marco Verratti is not a part of the Italy squad. (Photo by Claudio Villa/Getty Images)

Roberto Mancini has made quite a few alterations to the most recent squad that he had picked, back in November last year, although most of them are forced changed. Alessio Romagnoli misses out as he continues to recover from a calf injury, while Marco Verratti has been overlooked after reaching the UEFA Champions League final with PSG last month.

Meanwhile, Sandro Tonali was omitted after initially being picked in the provisional squad, as he closes in on his move to AC Milan. Alessandro Bastoni, Manuel Locatelli and Francesco Caputo have all earned their first Italy call-ups and will be hoping to make their debuts against Bosnia.

Mancini has picked quite a big squad for the latest round of international fixtures and could be set to make a lot of rotations in the two games this month. The Italy head coach will line his side up in a 4-3-3 formation once again, with Gianluigi Donnarumma, who has been linked with a move to Chelsea, taking his place in goal.

Experience will be the name of the game in the backline, with Leonardo Bonucci and Italy captain Giorgio Chiellini pairing up at the heart of the defence. Alessandro Florenzi and Cristiano Biraghi ought to be the full-back duo for the Azzurri against Bosnia.

Up ahead in midfield, Jorginho has been the preferred candidate at the base and he should start against Bosnia as well. Nicolo Zaniolo and Nicolo Barella will line up alongside the Chelsea star in the middle of the park, with the pair essaying the box-to-box roles.

Finally, in attack, the key man for Italy will be star striker Ciro Immobile. The 30-year-old will lead the line for Italy against Bosnia, with Stephan El Shaarawy and Federico Bernadeschi being the two wide men, as Lorenzo Insigne sits this one out due to a knock. 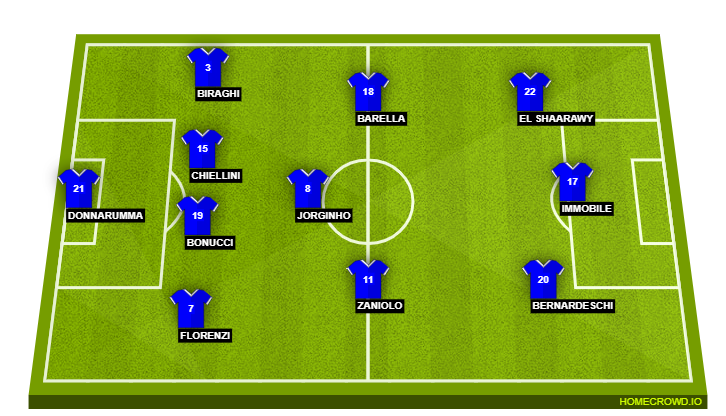 Much like his counterpart, Dusan Bajevic has shuffled things around for his first game in-charge of Bosnia and Herzegovina. For the UEFA Nations League matches against Italy and Poland, a lot of changes have been made to the squad, with Bajevic also seeing six players drop out either due to injuries or some other reason.

The biggest absentee for Bosnia against Italy will be Miralem Pjanic, who made himself unavailable due to his ongoing recovery from COVID-19. Apart from the new Barcelona midfielder, the likes of Rade Krunic, Miroslav Stevanovic, Stjepan Loncar, Darko Todorovic and Besim Serbecic have withdrawn their names from the squad.

For his first match in-charge of Bosnia, Bajevic should keep things simple and line his side up in a familiar 4-3-3 formation. The key man for Bosnia will invariably be captain Edin Dzeko, who will lead the line for the visitors against Italy. Edin Visca ought to be one of the two wide men, with Haris Duljevic expected to start on the left flank.

With Pjanic unavailable, Gojko Cimirot is expected to sit at the base of the three-man midfield, with Muhamed Besic providing defensive support. The third man in the middle of the park ought to be Amer Gojak, who will have the freedom to advance further up the pitch during the offensive phase.

Toni Sunjic and Ermin Bicakcic will pair up at the heart of the Bosnia and Herzegovina defence, with Sead Kolasinac and Zoran Kvrzic being the two full-backs. In goal, Ibrahim Sehic is likely to get the nod over veteran custodian Asmir Begovic. 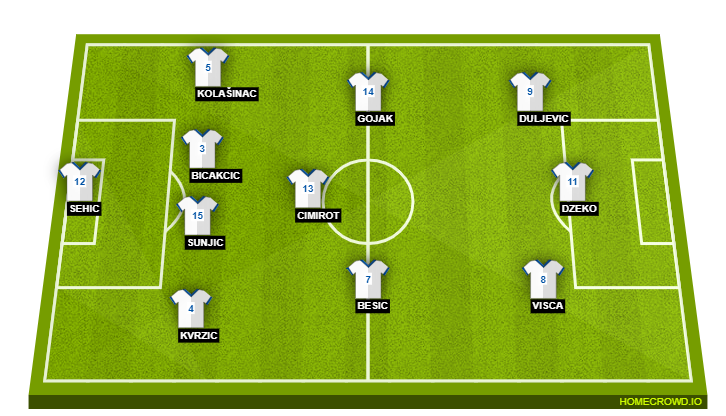 Will Immobile deliver the goods for Italy against Bosnia? (Photo by Claudio Villa/Getty Images)

What a year it has been for Ciro Immobile. While he was already going great guns at Lazio, the 30-year-old has taken his game to the next level in the last 12 months, going on to win the Capocannoniere in the Serie A this past season.

Now, he must bring this form to the international stage, as Roberto Mancini looks to continue his team’s hot streak. A Bosnia and Herzegovina side that struggled against Italy last year presents him the perfect opportunity to continue his good run, and Mancini will look towards him to deliver the goods on Friday.

This one is rather straightforward to call. While Roberto Mancini & co. are reuniting for the first time in nearly 10 months, there is no denying the fact that Italy are a more settled unit than Bosnia and Herzegovina.

The visitors will, in fact, be playing their first match under the tutelage of Dusan Bajevic and have a lot of uncertainties surrounding them. While the presence of Edin Dzeko does mean they will pose a threat, Italy should have more than enough quality to grab all three points in Florence. The Hard Tackle, therefore, predicts a 2-0 win for the Azzurri in their first UEFA Nations League tie.