A place in the UEFA Europa League final will be on the line when Sevilla take on Manchester United at the RheinEnergieStadion on Sunday.

The elongated 2019/20 season is nearing its end, with the semi-finals of both the UEFA Champions League and Europa League upon us. As far as the Europa League is concerned, the first of the two semi-finals will pit Sevilla against Manchester United, with the two former winners looking to reach the final.

Sevilla, the most successful club in the history of the Europa League, have enjoyed a fine 2019/20 campaign under the tutelage of Julen Lopetegui. Los Nervionenses have already made it to the Champions League courtesy a top four finish in La Liga and are playing in the Europa League without any added pressure.

As far as their European campaign is concerned, Sevilla comfortably got past the group stage after topping their group and have since let in just 1 goal in the knockout stages, which, in turn, has helped them get to the semi-finals. Manchester United, like their opponents, are in next season’s Champions League after finishing third in the Premier League.

The Red Devils’ Europa League campaign has mirrored that of Sevilla as well, first finishing atop their group before breezing into the finals. Last time out, though, Manchester United were made to work hard before they managed to beat FC Copenhagen 1-0 in Cologne.

The last time Sevilla and Manchester United locked horns was in the Champions League Round of 16 in the 2017/18 season, with the Spanish giants prevailing. Ahead of the latest meeting between the two sides, The Hard Tackle now takes a closer look at the encounter.

Julen Lopetegui has a full strength squad at his disposal against Manchester United. (Photo by David Ramos/Getty Images)

Julen Lopetegui does not have a single roster issue hampering his preparations ahead of his side’s latest Europa League fixture. Against Manchester United on Sunday, the Sevilla manager will have a fully fit squad at his disposal, with midfielder Nemanja Gudelj at his disposal now.

But, Lopetegui, who has heaped praise on Manchester United ahead of the game, is likely to keep the changes to a bare minimum, following two solid displays by his team this month in the Europa League. The impressive Yassine Bounou should, therefore, keep his place in goal, having played a key role in ensuring Sevilla got past Wolves in the quarter-finals without any major hiccups.

In front of Bounou, Lopetegui ought to line Sevilla up in a 4-3-3 formation once again, with Jules Kounde and Diego Carlos, who has been linked with Arsenal and Liverpool lately, pairing up at the heart of the Sevilla defence once again, with their primary objective being to keep a check on the in-form Anthony Martial.

Jesus Navas and Sergio Reguilon will be the full-back duo, with both players posing a great deal of threat in the final third. Up ahead in midfield, the onus will be on Ever Banega to ensure Sevilla dominate the battle in the middle of the park. The Argentine will look to pull the strings seamlessly while also posing a threat with set-pieces.

Finally, in attack. Youssef En-Nesyri is expected to lead the line for Sevilla against Manchester United. However, the major impact makers in the final third will be the two wide men, Suso and Lucas Ocampos, who will look to create overloads in the central areas by veering infield more often than not. 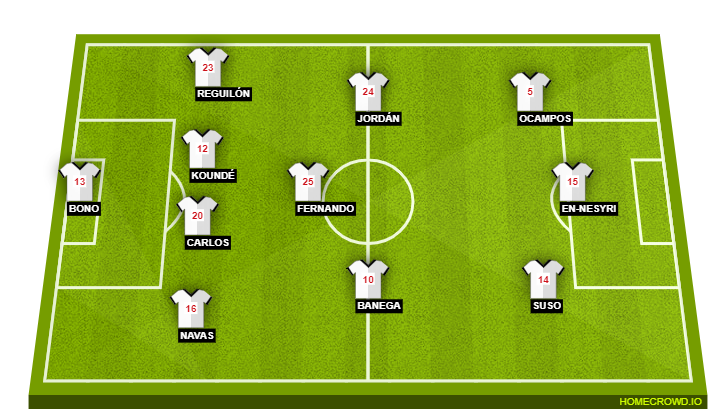 Unlike his counterpart in the Sevilla dugout, Ole Gunnar Solskjaer does not have the luxury of having a full-strength squad available to him. However, the Manchester United manager does not have any fresh injury concerns to deal with either, with Luke Shaw, Phil Jones and Axel Tuanzebe the only players who remain unavailable.

The key decision for Solskjaer will once again be centered around the player between the sticks. Sergio Romero was given the nod against FC Copenhagen and although he barely had anything to do, keeping a clean sheet would have boosted his confidence manifold. The Argentine should, thus, start ahead of David de Gea in the Manchester United goal again.

The backline is likely to see one change, though, with Victor Lindelof replacing Eric Bailly to partner Harry Maguire at the heart of the Manchester United defence. Brandon Williams and Aaron Wan-Bissaka are the obvious choices out wide, and the duo will have the tricky task of neutralising the threat of Lucas Ocampos and Suso.

The second and perhaps, the only other change to the starting lineup will come in midfield, with Nemanja Matic coming in for Fred. The Brazilian was not quite at his best last time out, while Matic changed the course of the game with his introduction in the second half, meaning the Serb has to start against a formidable Sevilla side.

Alongside Matic in the midfield double pivot, Paul Pogba is a certain starter and the Frenchman will look to continue from where he left off against Copenhagen. Bruno Fernandes will reprise the no. 10 role for Manchester United once again, but needs to elevate his levels despite providing good returns of late.

Anthony Martial, who was the clear standout for Manchester United in the quarter-final, will once again be pivotal for the Red Devils. The Frenchman, though, will need better support from Marcus Rashford and Mason Greenwood against Sevilla, with the duo being rather underwhelming in the previous fixture.

Will Marcus Rashford step up at this pivotal stage of the season? (Photo by Naomi Baker/Getty Images)

When football in Europe was nearing its return after nearly three months of lockdown, one player who had a lot of spotlight on him was Marcus Rashford. His incredible work off the field has rightly earned the English international a lot of plaudits and there is more to come in all likelihood. But, his performance levels on the field seem to have dipped.

Rashford has added to his game by becoming a proficient playmaker. However, in front of goal, the 22-year-old just does not seem to be getting his feet under him most of the times. Rashford, though, will need to pull his weight against Sevilla, with Anthony Martial alone not enough to topple the Spanish giants. Will he rediscover his best levels on Sunday?

This is a match between two sides that just do not lose after reaching the latter stages of European competition. Sevilla and Manchester United are also the two most solid teams left in the Europa League, meaning a closely contested affair is expected to ensue in Cologne on Sunday.

Julen Lopetegui might set his team up in his preferred possession-based style, but that might just play into the hands of Manchester United, who are capable of executing devastating counter-attacks by exploiting the pace of Marcus Rashford, Anthony Martial and Mason Greenwood.

The Red Devils are also due a big collective performance, having been underwhelming despite getting positive results in the past few weeks. And so, Ole Gunnar Solskjaer’s men might have enough in them to eke out a narrow win. The Hard Tackle, therefore, predicts a 2-1 win for Manchester United, although the result could well be exactly the opposite as well.