A clash of the heavyweights is upon us at Estadio da Luz, with Barcelona taking on Bayern Munich in the UEFA Champions League quarter-finals on Friday.

We are exactly halfway through the Last Eight stage of the UEFA Champions League, with Paris Saint-Germain and RB Leipzig progressing through to the semi-finals. The next quarter-final promises to be a blockbuster clash, as Barcelona lock horns with Bayern Munich at Estadio da Luz on Friday night.

Barcelona have endured a topsy turvy 2019/20 season so far. Surprisingly without a trophy to show for their efforts at this late a stage in the campaign, the Blaugrana surrendered their La Liga title to Real Madrid while also failing to win the Copa del Rey and the Spanish Super Cup.

In the UEFA Champions League, too, Barcelona have been far from their best but remain one of the few unbeaten teams in the competition. The Catalans reached the finals by beating Napoli in the last round. Bayern Munich, on the other hand, have been rampant in Europe and otherwise, coming into their own under Hansi Flick.

The Bundesliga champions have not faced defeat even once in 2020, with their unbeaten run stretching to December last year. As far as the Champions League is concerned, Bayern have won each of their 8 games so far, scoring a whopping 31 goals while letting in a mere 6.

Barcelona and Bayern Munich last faced off in the Champions League semi-finals in the 2014/15 season, with the Catalans progressing to the final courtesy a 5-3 aggregate win. Ahead of the latest meeting between the two sides, The Hard Tackle takes a closer look at the encounter.

Sergio Busquets and Arturo Vidal are both expected to return after serving out their respective suspensions. (Photo by Lluis Gene/AFP via Getty Images)

Quique Setien barely has any roster issues hampering his preparations ahead of his side’s latest tie in the UEFA Champions League. Against Bayern Munich on Friday, the Barcelona manager will be without just one first-team player, with Samuel Umtiti out with a knee injury.

In fact, Setien has only greeted positive updates on the team news front, with Sergio Busquets and Arturo Vidal available once again after serving out their suspensions last time out. Surprisingly, Ousmane Dembele, who has been linked with Manchester United lately, is at the disposal of the Barcelona manager as well.

Dembele, though, is unlikely to be fit enough to feature from the kick-off, but could be an option on the bench after being given the all clear to return to action. Busquets and Vidal, however, are likely to return to the starting lineup, in what is expected to be a midfield quartet.

There have been suggestions that Setien could line his side up in a 4-4-2 formation, with Busquets, Vidal, Sergi Roberto and Frenkie de Jong set to be deployed in the middle of the park, so as to crowd the midfield and win the ball higher up the pitch by looking to restrict Bayern Munich’s vertical movement.

Roberto and de Jong will be out wide in the defensive phase, but de Jong will veer infield during transitions, allowing Jordi Alba to overlap on the left flank. Upfront, Lionel Messi and Luis Suarez are likely to form the strike partnership, with Antoine Griezmann dropping to the bench. Messi will essentially play off Suarez, looking to pull the strings around the Bayern Munich box.

At the back, Alba will be joined by Gerard Pique, Clement Lenglet and Nelson Semedo, with Marc-Andre ter Stegen being the man in the Barcelona goal. The German international will also renew his rivalry with compatriot Manuel Neuer on Friday.

Much like his counterpart in the Barcelona dugout, Hansi Flick will be bereft of the services of just one first-team player in the Champions League quarter-final. Benjamin Pavard is the only Bayern Munich player on the sidelines, with the Frenchman recovering from an ankle injury.

Pavard’s absence means Joshua Kimmich will once again start as the right-back, abandoning his role as the holding midfielder for the Bundesliga champions. The German international will have Alphonso Davies, David Alaba and Jerome Boateng, who has recovered from a minor knock, for company at the back, with Manuel Neuer starting between the sticks.

Kimmich’s deployment on the right side of the Bayern Munich defence means the midfield double pivot will have the pairing of Leon Goretzka and Thiago Alcantara, whose future at the Allianz Arena is uncertain. Meanwhile, Thomas Muller will reprise the no. 10 role and will roam across the final third looking for pockets of space.

Finally, in attack, the key man will invariably be Robert Lewandowski, who just cannot stop scoring at the moment. Lewandowski will lead the line for Bayern Munich against Barcelona, with Serge Gnabry another player who will pose a great deal of threat.

As for the final spot in attack, Kinsgley Coman, Ivan Perisic and Philippe Coutinho will hope to get a starting berth. The competition is essentially between Coman and Perisic, with Barcelona loanee Coutinho unlikely to start. In the end, the Bayern attack should be completed by Coman, who is reportedly a target for Manchester United. 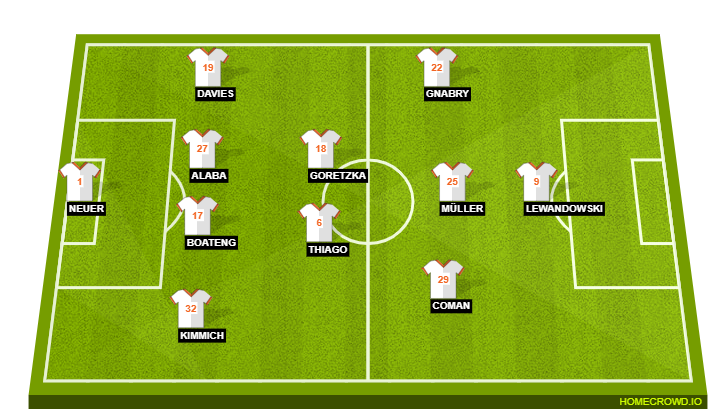 2019/20 has been the season of Robert Lewandowski. The Pole has been in a league of his own across competitions and is the odds-on favourite to end up as the Champions League top scorer as well. Now up to fourth on the list of all-time goalscorers in the competition, Lewandowski will be hoping to break further records.

Lewandowski would also be eager to continue adding to his already marvelous record (53 goals in 44 games in addition to a few assists as well). Can the rampaging Lewandowski send Barcelona packing out of the Champions League, making the Blaugrana’s stay in Portugal a short one?

A month ago, there might have been no doubt in anyone’s mind as to who the winner in this contest would be. After all, Bayern Munich were unstoppable while Barcelona were faltering constantly. The reasonably comfortable win over Napoli, though, changes things, if only ever so slightly.

If Lionel Messi turns up, as he so often does and did against Napoli, Friday’s game could end up being a closely contested affair. However, on the other end, Robert Lewandowski is seemingly even more vehement in the final third, while having a much better and more in-form support cast around him.

That, coupled with a fairly solid defence, should give Bayern Munich the edge, if only slightly so, over Barcelona. With that in mind, The Hard Tackle predicts a 2-1 win for Hansi Flick & co. who will meet the winners of the game between Manchester City and Lyon in the semi-finals.