A place in the UEFA Champions League semi-finals will be up for grabs when RB Leipzig take on Atletico Madrid at Estadio Jose Alvalade on Thursday.

The most crucial phase of the UEFA Champions League has begun, with the game between PSG and Atalanta taking place on Wednesday. On Thursday, the quarter-finals continue, with RB Leipzig taking on Atletico Madrid at Estadio Jose Alvalade.

RB Leipzig have enjoyed a decent campaign thus far, first qualifying for the Champions League yet again with a third place finish in the Bundesliga. As far as their performance in Europe goes, Die Roten Bullen have been very consistent, losing just 1 of their 8 games so far while not letting in any goal in the knockout stages till date, having beaten Tottenham 4-0 on aggregate in the Round of 16.

Atletico Madrid, on the other hand, have been uncharacteristically shaky this season, including in their Champions League campaign, where they were beaten twice in the group stage. However, Los Rojiblancos have turned things around in 2020, finishing 3rd in La Liga while getting past holders Liverpool in the Round of 16 in the Champions League, with a 4-2 aggregate win.

Thursday’s match-up will be the first-ever time that RB Leipzig and Atletico Madrid will lock horns and ahead of the first meeting between the two sides, The Hard Tackle takes a closer look at the encounter.

Timo Werner will not be at Julian Nagelsmann’s disposal after completing his move to Chelsea. (Photo by Maja Hitij/Bongarts/Getty Images)

Julian Nagelsmann does not have any major injury concerns hampering his preparations ahead of his side’s return to the UEFA Champions League. Against Atletico Madrid on Thursday, the RB Leipzig boss will not have any player on the sidelines, although he will not be able to call upon a key player anymore.

Timo Werner will play no part for Leipzig after completing his switch to Chelsea and beginning training with his new club. Meanwhile, Nagelsmann is also sweating over the fitness of Ibrahima Konate (hip) and Yussuf Poulsen (ankle), who continue to work hard on regaining full fitness after recovering from their respective injuries.

The main issue for the Leipzig manager will be to decide how he lines his side up in the absence of Werner. It is likely that with Poulsen not really fully fit, Nagelsmann could choose to employ the 3-4-2-1 formation, with Patrik Shick leading the line for the Bundesliga giants versus Atletico Madrid.

Schick will likely be supported by Christopher Nkunku and Dani Olmo, with the duo looking to take up central positions higher up the pitch. The width in the final third will be provided by the wing-backs, who ought to be Angelino on the left and Nordi Mukiele on the right. Angelino and Mukiele will likely flank Konrad Laimer and captain Marcel Sabitzer.

The two central midfielders will be encouraged to play more vertical passes, but will also be tasked with remaining behind the ball during the defensive phase. Meanwhile, Konate’s possible absence means Dayot Upamecano, Lukas Klostermann and Marcel Halstenberg will form the back-three, which will protect the brilliant Peter Gulacsi in the Leipzig goal. 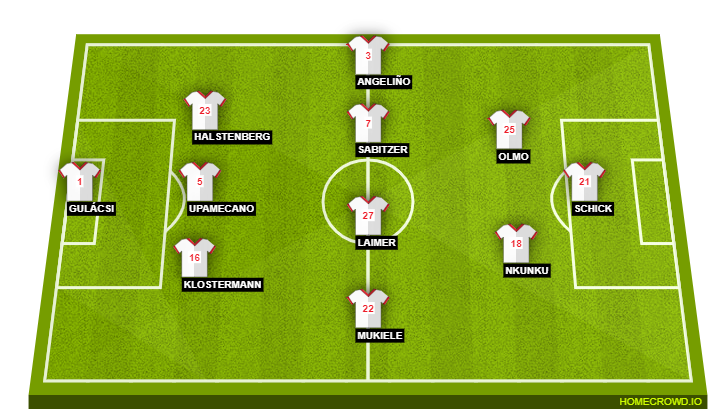 Atletico Madrid were faced with a coronavirus scare ahead of the UEFA Champions League finals in Portugal after two of their players tested positive for COVID-19. Those two players are Angel Correa and Sime Vrsaljko, who are currently self isolating and will not feature in any capacity against RB Leipzig.

Otherwise, Diego Simeone has just one other concern, with Thomas Partey, linked with a possible summer switch to Arsenal, doubtful due to a minor thigh complaint. If Partey misses out, Koke and Saul Niguez will pair up in the middle of the park.

Marcos Llorente has been used in a myriad of roles by Simeone since the resumption of football, with the player even deployed as a support striker. Against Leipzig, though, the Spaniard should be used on the right side of the Atletico Madrid midfield.

Llorente will primarily look to help the Colchoneros hold their defensive shape while taking up advanced positions during the offensive phase. On the left flank, there is no looking past Yannick Carrasco, who has been a key player since rejoining Atletico Madrid in January.

Upfront, Simeone might throw a swerve and bench Alvaro Morata, with the aim of using Diego Costa’s combative nature to good use against Leipzig. Costa will have Joao Felix as his strike partner. Finally, at the back, the quartet of Kieran Trippier, Jose Gimenez, Felipe and Renan Lodi pick themselves, with Jan Oblak being the man between the sticks for Atletico Madrid. 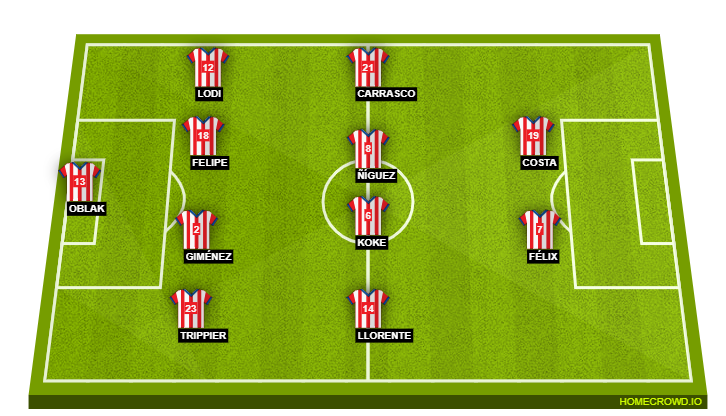 It has been a difficult first season in the big leagues for Joao Felix. Touted to be one of the best young players in the world, the Portuguese wonderkid has not set the stage alight for Atletico Madrid, although he has the benefit of age and growing experience.

Ahead of the game, Felix has asserted that he would like to grow like Antoine Griezmann did under Diego Simeone. What better stage to start such an upward trajectory than in a big European fixture. If he manages to raise the bar, a solid Atletico Madrid side might be on their way to the next stage.

A game between two of the most solid defensive units left in the UEFA Champions League is a recipe for a contest that is likely to be bereft of a lot of goalmouth action. This is game that will largely be contested in the midfield, with big chances coming few and far between.

When the chances are created, the two top class goalkeepers, Peter Gulacsi and Jan Oblak, ought to keep the ball out of the net for the most part. However, as the game progresses and the desperation starts to creep in, Timo Werner’s absence could end up being telling, while a motivated Joao Felix could make the difference. The Hard Tackle, therefore, predicts a 1-0 win for Atletico Madrid.