Manchester United will be hoping to qualify for the UEFA Europa League semi-finals when they meet FC Copenhagen at the RheinEnergieStadion on Monday.

The decisive phase of the European competitions begins this week, with the unique, one-off UEFA Europa League tournament taking place in Germany. Manchester United will return to action on Monday, as they take on FC Copenhagen at the RheinEnergieStadion, with a place in the semi-finals on the line.

Manchester United have turned their season around quite well in 2020, reaching the semi-finals of both the domestic cup competitions before finishing in the top four in the Premier League to qualify for the Champions League. In the Europa League, the Red Devils have been clinical, comfortably going past every stage so far, beating LASK 7-1 on aggregate in the Round of 16.

FC Copenhagen, on the other hand, have slogged it out in the Europa League, first finishing second in Group B. In the knockout rounds, Byens Hold Loverne have needed to mount a comeback each time, beating Celtic and Istanbul Basaksehir to reach the quarter-finals. Now, Stale Solbakken’s charges will hope to continue to push for their first title of the season, having finished runners-up in the Danish Superliga.

Manchester United and Copenhagen have previously locked horns twice, with both sides winning one game each, in the Champions League 2006/07 group stage. Ahead of the latest meeting between the two sides, The Hard Tackle takes a closer look at the encounter.

Luke Shaw will play no part for Manchester United in the remainder of their UEFA Europa League campaign. (Photo by Shaun Botterill/Getty Images)

Ole Gunnar Solskjaer does not have any fresh injury concerns to deal with ahead of his side’s latest fixture in the Europa League. On Monday, the Manchester United manager will be without three first-team players, none of whom will play any part in the remainder of the season.

Luke Shaw, Phil Jones and Axel Tuanzebe have all suffered season-ending injuries and the trio have been omitted from the updated Europa League squad. The likes of Ethan Galbraith, Ethan Laird and Teden Mengi are among the academy players who have travelled with the Manchester United squad to Germany.

As far as the starting lineup is concerned, Solskjaer will likely make wholesale changes to the side that started against LASK last week. The big decision, though, will be deciding who starts in goal, something that the Manchester United manager himself admitted will be a key selection, during his pre-match press conference.

Sergio Romero has been the preferred choice so far in the Europa League, but Solskjaer’s decision to go with David de Gea in the FA Cup semi-final clash with Chelsea last month could points towards something similar ensuing against Copenhagen as well.

In front of de Gea, Harry Maguire and Brandon Williams will be the only players keeping their place, with the latter an automatic pick due to Shaw’s absence. Maguire, meanwhile, should have Victor Lindelof as his central defensive partner, with Aaron Wan-Bissaka being the right-back for Manchester United.

In the midfield double pivot, Nemanja Matic and Paul Pogba ought to replace Scott McTominay and Fred, with Bruno Fernandes returning to reprise the no. 10 role. Juan Mata was decisive in the win over LASK last week, but should make way for Mason Greenwood, who is now first-choice on the right wing.

On the left flank, there is no looking past Marcus Rashford, who will hope to return among the goals after getting nearly two weeks of rest. Anthony Martial will lead the line for Manchester United against Copenhagen, with Odion Ighalo dropping to the bench.

Like his counterpart in the Manchester United dugout, Stale Solbakken has a number of issues hampering his preparations ahead of the Europa League quarter-final tie. On Monday, the FC Copenhagen boss will be without as many as four first-team players.

While Michael Santos is suspended, Ragnar Sigurdsson, Nicolaj Thomsen and Viktor Fischer miss out due to injuries. Solbakken has only a limited number of players available to him, unlike Solskjaer and is likely to keep the changes to a minimum.

Karl-Johan Johnsson is expected to be deployed between the sticks once again, where he should be a busy man against a dangerous Manchester United attack. Andreas Bjelland and Victor Nelsson ought to pair up at the heart of the Copenhagen defence, with Nicolas Boilesen and former Manchester United defender Guillermo Varela being the full-backs.

Solbakken will, meanwhile, line his side up in a 4-2-3-1, mirroring Manchester United’s formation. The double pivot should see the only expected change in the starting eleven, with Jens Stage likely to replace Robert Mudrazija.

Stage will provide company to captain Zeca, with the duo sitting back for the most part while looking to initiate quick transitions to spark rapid breaks. The key man for Copenhagen will be Jonas Wind, who was involved in all three goals against Istanbul Basaksehir, scoring a brace and providing an assist.

Wind, though, will not play in his preferred position as the centre-forward, instead playing off the sole striker, who will be Mikkel Kaufmann. Pep Biel and Rasmus Falk Jensen will be the two wide men, who will aim to cut in and add to the numbers in the central areas when the opportunity presents itself. 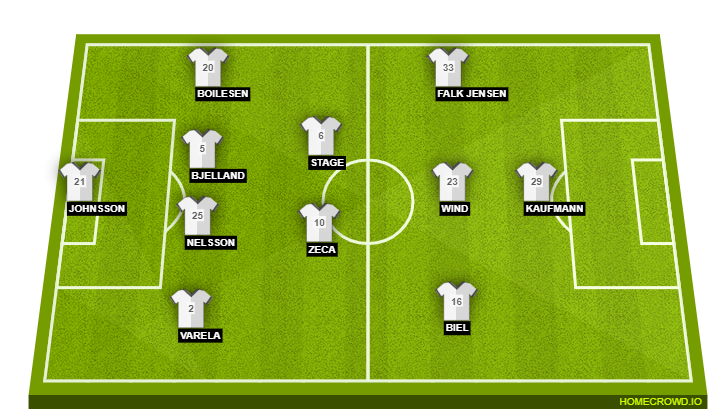 In the form of his life. (Photo by Laurence Griffiths/Getty Images)

Heading into the 2019/20 season, the pressure was invariably on Anthony Martial. The Frenchman had been trusted to be Manchester United’s striker after Ole Gunnar Solskjaer sanctioned the sale of Romelu Lukaku before choosing not to buy a replacement. The start to the season was far from spectacular, owing to injury.

Following his return, Martial was not quite at his best. However, the turn of the year has seen him turn his form around as well. In fact, the turnaround has been so significant that Martial has gone on to become Manchester United’s top scorer for the season, enjoying his most productive season ever and is now scoring goals for fun.

Ahead of the game, Martial has garnered a lot of praise from Solskjaer and he will hope to lead the way for Manchester United once again. An in-form Martial should be good news for Copenhagen and it will be interesting to see if he can continue his fine run on Monday.

On paper, there seems to be only one winner in this game. A first-choice Manchester United side should ideally get past FC Copenhagen with ease. However, single legged knockout ties are the perfect foil for shock results and a keenly-contested game should ensue.

Copenhagen will take the game to Manchester United on the counters, but Manchester United should have the bulk of the chances. While goals are expected on both ends, United’s superiority in terms of quality should help them come out on top in Cologne. With that in mind, The Hard Tackle predicts a 3-1 win for Ole Gunnar Solskjaer & co.