Inter Milan will be looking to keep their faint Serie A title hopes alive when they take on Genoa at the Luigi Ferraris Stadium on Saturday.

The 2019/20 season is in its final stretch at long last, with just three matchdays left to be played in Serie A. The big game on Saturday will feature Inter Milan, who will be locking horns with Genoa at the Luigi Ferraris Stadium, knowing that they cannot afford to drop any more points from now till the end of their campaign.

For Genoa, 2019/20 has been a season of struggle, with the team never really managing to stitch together a run of results together. However, since the appointment of Davide Nicola, things have improved drastically, with the Grifone winning 7 of the 9 games that they have played in this term under him. These results have taken them out of the drop zone, four points clear.

Inter Milan, on the other hand, have gone through a season that will leave most wondering what could have been. The Nerazzurri showed a lot of promise in the early days of the season, but could never manage to sustain the pressure on Juventus. The Bianconeri now need just one more win to confirm their status as champions and Inter are only fighting for second spot.

The reverse fixture, played at San Siro back in December last month, ended in a 4-0 win for Inter Milan, with Romelu Lukaku, Roberto Gagliardini and Sebastiano Esposito on target. Ahead of the latest meeting between the two sides, The Hard Tackle takes a closer look at the encounter.

Cristian Romero misses out for Genoa due to an injury. (Photo by Paolo Rattini/Getty Images)

Davide Nicola has one fresh roster issue hampering his preparations ahead of the visit of Inter Milan. On Saturday, the Genoa manager will be without three first-team players, with Cristian Romero and Ivan Radovanovic out injured, while Lukas Lerager is suspended for one game.

In the absence of Lerager, Valon Behrami is expected to make his way back to the starting lineup. The Swiss midfielder will partner Lasse Schone and Filip Jagiello in the middle of the park, with Schole looking to snuff out the central moves that Inter Milan will look to create. Behrami and Jagiello will be the two midfield workhorses.

Meanwhile, Nicola is expected to continue fielding his side in a 4-3-3 formation. Upfront, Andrea Pinamonti, on loan at Genoa from Inter Milan, should lead the line for the hosts, with Goran Pandev and Iago Falque being the two wide men.

At the back, the injury suffered by Romero means Nicola will be forced to make one change. That change ought to see Edoardo Goldaniga return, with the 26-year-old pairing up with Andrea Masiello at the heart of the Genoa defence. Domenico Criscito and David Bireaschi will be the two full-backs while Mattia Perin be stationed between the sticks. 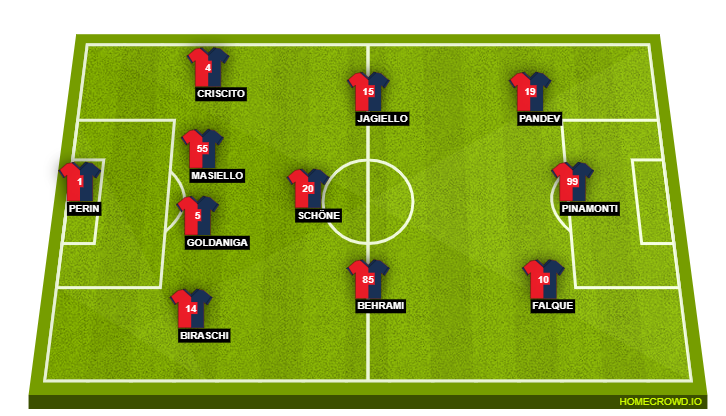 Like his counterpart in the Genoa dugout, Antonio Conte has a couple of fresh issues to contend with ahead of his side’s latest fixture. On Saturday, the Inter Milan manager will be bereft of the services of as many as four first-team players.

Stefano Sensi and Matias Vecino continue to be sidelined due to their respective injuries. However, the duo have been joined by Nicolo Barella and Stefan de Vrij, who both miss out for Inter Milan against Genoa.

In the absence of de Vrij, Alessandro Bastoni should be back in the starting lineup, while Milan Skriniar is likely to come in for Danilo D’Ambrosio. Diego Godin will complete the three-man central defensive unit, which will guard goalkeeper Samir Handanovic

With Barella suspended, Roberto Gagliardini will once again have Marcelo Brozovic for company in the midfield double pivot. Antonio Candreva and Ashley Young will be the two wing-backs again. As for attack, there is no looking past Christian Eriksen in the no. 10 role, while Romelu Lukaku and Lautaro Martinez will form the strike partnership. 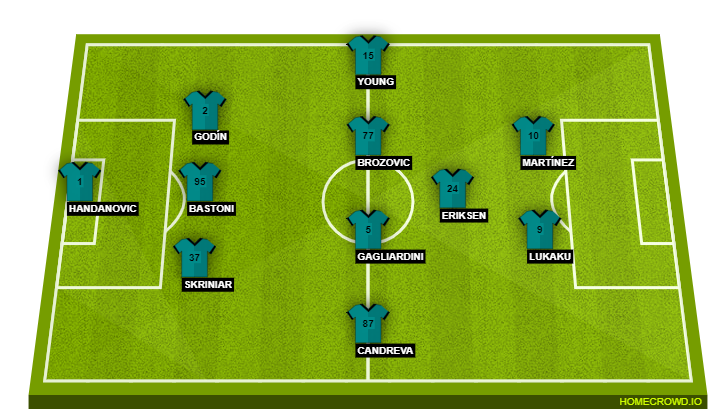 Eager to make an impact. (Photo by Emilio Andreoli/Getty Images)

Since the resumption of Serie A last month, the big reason for Inter Milan blowing hot and cold is a lack of consistency in the final third. Alexis Sanchez has been on a roll, but looks in need of some rest, meaning someone else needs to do the heavy lifting, as far as chance-creation is concerned.

To that end, Christian Eriksen needs to improve, having not managed to deliver on a consistent basis since joining Inter Milan from Tottenham in the January transfer window. With his side’s title push all but over, the Dane can now find a stable footing ahead of the return of the Europa League, making Saturday’s game against Genoa, all the more important. Will Eriksen step up?

On paper, there seems to be only one possible result for this fixture. However, given the kind of inconsistency that Inter Milan have been plagued with in recent times, this match could be a little too close for comfort for them, thereby giving Genoa a sniff at a possible upset.

Having said that, Genoa’s own issues mean that Inter could be facing the ideal opposition in order to find the back of the net multiple times on Saturday. With that in mind, The Hard Tackle predicts a 3-1 win for Antonio Conte & co. with Christian Eriksen and Romelu Lukaku enjoying standout performances.