Arsenal will be looking their Premier League campaign on a positive note when they welcome Watford to the Emirates on Sunday.

The curtains are set to drop on the 2019/20 Premier League season this weekend, with all the matches being played at the same time on Sunday. Arsenal will be ending their campaign at home, as they play hosts to a Watford side that will desperate for a win at the Emirates to avoid relegation.

For Arsenal, 2019/20 has been a transitional season, forced in large part due to the dismissal of Unai Emery after a poor start to the season. The Gunners have since appointed Mikel Arteta as the new manager and have shown some positive signs since the turn of the year. However, after defeat to Aston Villa earlier this week, the best that they can do is finish 8th on the Premier League table.

Meanwhile, Watford have been a mess this term, having sacked three different managers so far. Such a predicament invariably leads to a relegation battle and the Hornets have always been in and around the drop zone. Heading into the final game of the season, Watford are 18th on the Premier League table, three points behind Aston Villa. To add to their concerns, their away record is iffy.

The reverse fixture, played at Vicarage Road in September last year, ended in a 2-2 draw, with Tom Cleverley and Roberto Pereyra rescuing a point for Watford after Pierre-Emerick Aubameyang had put Arsenal two up in the first half. Ahead of the latest meeting between the two sides, The Hard Tackle takes a closer look at the Premier League encounter.

Mesut Ozil’s exile from the team should continue, but Nicolas Pepe is likely to start for Arsenal against Watford. (Photo by Julian Finney/Getty Images)

Mikel Arteta does not have any fresh injury concerns hampering his preparations ahead of the visit of Watford. On Sunday, the Arsenal manager could be without as many as seven first-team players due to fitness issues, with Matteo Guendouzi another absentee due to his disciplinary problems.

Those who are certain to miss out for the Gunners are Bernd Leno (knee), Shkodran Mustafi (thigh), Calum Chambers (knee), Pablo Mari (ankle) and Gabriel Martinelli (knee). In addition to the aforementioned quintet, Reiss Nelson (groin) and Mesut Ozil (back) are major doubts and are likely to miss out for Arsenal.

Emiliano Martinez will continue filling in for Leno in the Arsenal goal, having done a marvellous job in the absence of the German. In front of him, Arteta should line his side up in a 3-4-3 formation once again. This time around, though, the Arsenal boss should start his first-choice players, having claimed that he will name his strongest possible side against Watford.

To that end, Kieran Tierney should return in the three-man central defensive unit, with David Luiz and Rob Holding providing him company at the back. Hector Bellerin ought to be recalled as well, with the Spaniard starting ahead of Cedric Soares as the right wing-back. On the opposite flank, the impressive Bukayo Saka should retain his spot.

Dani Ceballos was the only positive among those who started in the shock 1-0 loss to Aston Villa. The Spaniard will provide the creative spark from midfield, with Granit Xhaka, who made a definitive difference off the bench earlier this week, starting alongside him in the double pivot.

Pierre-Emerick Aubameyang, who scored twice in the reverse fixture against Watford, will start on the left side of the Arsenal attack, with Nicolas Pepe expected to return on the right wing. Alexandre Lacazette should lead the line for the Gunners, pipping Eddie Nketiah to the central striker berth.

Unlike his counterpart in the Arsenal dugout, Watford interim manager Hayden Mullins is not being pegged back by the absence of many regulars. The only players who will miss out for sure are Daryl Janmaat (knee), Isaac Success (Achilles) and Gerard Deulofeu (knee), with only the absence of Deulofeu being a major source of concern.

Meanwhile, Mullins is sweating over the availability of Etienne Capoue, who could be a key player for Watford if he can manage to prove his fitness ahead of the game against Arsenal. In case Capoue misses out again, Nathaniel Chalobah is likely to start in the three-man unit in the middle of the park alongside Will Hughes and Abdoulaye Doucoure.

There could be one change in the final third, with former Arsenal forward Danny Welbeck likely to return to the starting lineup. Welbeck will start on the left wing, with Ismaila Sarr being deployed on the right flank. Captain Troy Deeney will lead the line for Watford.

At the back, the defensive line might have an unchanged look, with Christian Kabasele and Craig Dawson pairing up at the heart of the Watford defence, while Kiko Femenia and Adrian Mariappa should continue being the full-backs. The back four will provide cover to Ben Foster. 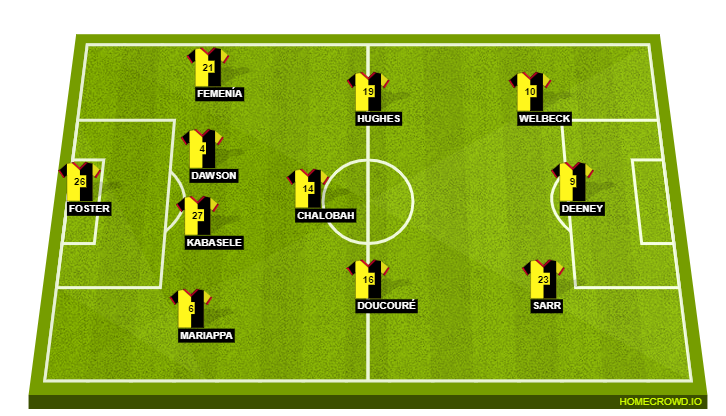 Will Aubameyang be celebrating winning the Golden Boot for a second time on Sunday? (Photo by Michael Steele/Getty Images)

With seventh spot on the Premier League table out of their reach, Arsenal have very little to play for against Watford. However, one player will be aspiring for something on Sunday, as Pierre-Emerick Aubameyang looks to win the Golden Boot for a second successive season.

The Arsenal captain is currently on 20 goals for the season, three beyond leader Jamie Vardy. While winning the Golden Boot is more of an outside chance for Aubameyang, he would still be eager to give it everything he has got.

A decent record against Watford also makes him one of the favourites to find the back of the net on Sunday. If that is to be his final memory in an Arsenal shirt – his future is uncertain after all – then that would be quite a fine way to sign off in the Premier League. Can Aubameyang make it happen?

Arsenal have very little motivation apart from staying fresh and healthy ahead of the FA Cup final against Chelsea. Watford, on the other hand, have no choice but to push for the win. Such a scenario plays in the hands of the Gunners, who barely have anything to lose on Sunday, as far as the final result is concerned.

Having said that, the Hornets have been abysmal on the road this season while Arsenal just do not lose on the final day anymore, and have lost none at the Emirates. Hence, all signs point towards the hosts grabbing all three points despite what happened earlier this week at Aston Villa and with that in mind, The Hard Tackle predicts a 2-1 win for Mikel Arteta & co.