Arsenal will be hoping to continue their winning run when they take on Aston Villa in their penultimate Premier League game of the season on Tuesday.

The elongated Gameweek 37 of the 2019/20 Premier League season continues into the midweek, as teams involved in the FA Cup semi-finals return to top-flight action. Arsenal are one of such club, as they go head-to-head with Aston Villa at Villa Park, looking to continue their quest for a finish in the European spots.

Aston Villa have endured a trial by fire on their return to the Premier League. While the Villans have impressed with their fighting spirit, the fact that they have one of the worst defensive units in the league coupled with a somewhat goal-shy attack has meant that they have been mired in the relegation battle. Currently, the Villans are 18th on the table, three points from safety.

Arsenal, meanwhile, have endured a difficult campaign themselves but have improved under Mikel Arteta. The Gunners are 10th on the table presently, but can still finish as high as 6th, with rivals Tottenham 5 points ahead, having played a game more. The alternate route to the Europa League is also possible after they reached the FA Cup final by beating Manchester City this past weekend.

The reverse fixture, played at the Emirates back in September last year, ended in a late come-from-behind 3-2 win for Arsenal, who were also down to ten men for half the game. Ahead of the latest meeting between the two sides, The Hard Tackle takes a closer look at the Premier League clash.

Danny Drinkwater is back in contention. (Photo by George Wood/Getty Images)

Dean Smith has seen his squad’s injury woes improve ahead of the visit of Arsenal. On Tuesday, the Aston Villa manager will have just four first-team players unavailable, with Danny Drinkwater and Kortney Hause recovering from their respective injury troubles.

Those who will miss oaut for Villa against Arsenal are Tom Heaton, Bjorn Engels and Wesley, with Neil Taylor a major doubt and unlikely to be risked, as he continues to recover from a hamstring injury. In Taylor’s absence, Matt Targett will be deployed as the left-back for the hosts.

On the opposite flank, Ahmed Elmohamady should get the nod over Frederic Guilbert. The two full-backs will be given the license to charge forward when the opportunity presents itself but more often than not, both Targett and Elmohamady will be pinned back, trying to absorb the pressure that Arsenal look to create.

At the heart of the Aston Villa defence, Tyrone Mings and Ezri Konsa should pair up, with Pepe Reina likely to be the man between the sticks for the hosts. Up ahead in midfield, Conor Hourihane should be stationed at the base, looking to keep things tight in the middle of the park.

Douglas Luiz and John McGinn will likely be the two box-to-box midfielders, with the duo looking to create overloads in the final third during the offensive phase. Finally, the onus in attack will be on captain Jack Grealish, who will initially start on the left flank, but should have a free role. Mbwana Samatta and Trezeguet ought to complete the numbers in attack. 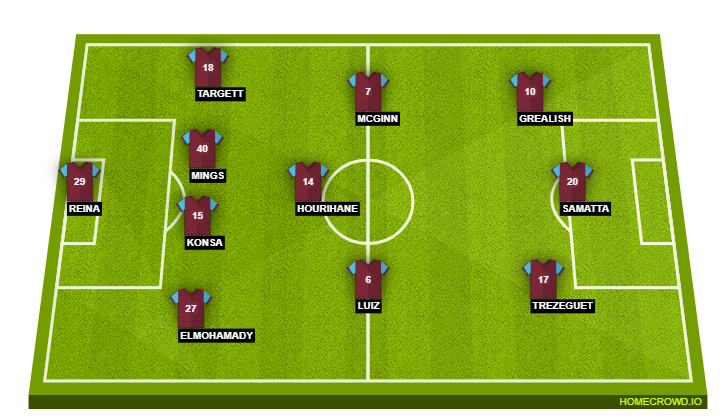 Unlike his counterpart in the Aston Villa dugout, Mikel Arteta has been hampered by a few fresh injury concerns ahead of the trip to Birmingham. On Tuesday, the Arsenal boss is likely to be without as many six first-team players.

Pablo Mari is done for the season due to an ankle injury he sustained last month, while Gabriel Martinelli is unlikely to play another game in 2020. In addition, Bernd Leno and Calum Chambers are sidelined as well, but are closing in on their returns.

Finally, Shkodran Mustafi is unlikely to be risked after he sustained a minor injury this past weekend against Manchester City. Mesut Ozil and Matteo Guendouzi, meanwhile, are two players who are out of favour with Arteta and will play no part against Aston Villa.

In Leno’s absence, Emiliano Martinez has done a stellar job, having hardly put a foot wrong. The Argentine will continue in the Arsenal goal and he ought to be protected by a three-man central defensive unit again, where Rob Holding should be recalled, owing to Mustafi’s injury while Sead Kolasinac ought to come in for Kieran Tierney, who is due some rest.

David Luiz, though, will continue in the sweeper role and will look to construct play from deep. As for the wing-backs, Cedric Soares should get a start, with Bukayo Saka expected to come in for Ainsley Maitland-Niles. In midfield, Arteta could make an alteration, with Lucas Torreira coming in for Dani Ceballos while Granit Xhaka continues as the holding midfielder.

Up ahead in attack, Eddie Nketiah is available after serving his three-match ban and should lead the line for Arsenal, enabling Arteta to provide some rest to Alexandre Lacazette. Pierre-Emerick Aubameyang should continue on the left wing, though, following his match-winning brace against City. The third and final man in attack is expected to be Nicolas Pepe.

Coming into his own. (Photo by Octavio Passos/Getty Images)

In what has been a season full of ups and downs for Arsenal, no player better exemplifies such a roller-coaster of a ride than Nicolas Pepe. Signed for a club record £72 million fee, expectations were naturally high among the Gunners’ faithfuls, only for the Ivorian to blow hot and cold. But, as the season has progressed, Pepe has started finding his feet and making a more visible impact.

On song against Manchester City, Pepe is starting to come into form at just the right stage of the season, as Arsenal look to end their campaign with a trophy and European qualification. Now is the time for the 25-year-old go on a run, the first game being against Aston Villa.

We are at that time of the season when most clubs are desperate for points, especially those that are striving to avoid relegation. Aston Villa are one such club and with just two games remaining in the season, they will be eager to do all that it takes to keep their survival hopes alive. However, they face a resurgent Arsenal next.

The Gunners are starting to settle into an ideology under Mikel Arteta, with the team looking more settled than it ever has this term. Having said that, the nature of the tie means a closely-contested affair could ensue on Tuesday. Expect a match where things might be too close to call, with Arsenal likely to just about edge Aston Villa. That Hard Tackle, thus, predicts a 2-1 win for the visitors.