Inter Milan will be hoping to keep their slim Serie A title hopes alive when they take on AS Roma at Stadio Olimpico on Sunday.

The games continue to come thick and fast in the Serie A with Matchday 34 rolling in this weekend. The marquee fixtures in the latest round of fixtures will be played out in the Italian capital as AS Roma play hosts to Inter Milan at Stadio Olimpico on Sunday night.

AS Roma have endured a blow-hot-blow-cold campaign under the tutelage of Paulo Fonseca in 2019/20. While the Giallorossi have let in the fourth fewest number of goals, losing 10 games has not helped their cause one bit. However, Roma are on a good run of form, having won each of their last three games, including the 2-1 success against Hellas Verona earlier this week.

Inter Milan, on the other hand, have made good progress under Antonio Conte, losing the fewest games this term (4). However, eight draws have meant that the Nerazzurri find themselves six points adrift of defending Serie A champions Juventus. With the Bianconeri now faltering towards the end of the season, Inter need to win each of their remaining games to stand a chance of winning the title.

The reverse fixture, played at San Siro back in December last year, ended in a goalless draw, with chances coming few and far between for both AS Roma and Inter Milan. Ahead of the latest meeting between the two sides, The Hard Tackle takes a closer look at the encounter.

Chris Smalling is in contention to feature for AS Roma against Inter Milan. (Photo by Paolo Rattini/Getty Images)

Paulo Fonseca does not have any fresh injury concerns hampering his preparations ahead of the visit of Inter Milan. On Sunday, the AS Roma manager will be without four first-team players, with the fitness of Chris Smalling also a key point under consideration.

The English defender, on loan from Manchester United, resumed training this week and could be in contention to start against Inter. However, Smalling is likely to be eased in, especially with games being played every three days. Apart from the 30-year-old, Roma will also be missing Federico Fazio, Juan Jesus, Davide Santon and Antonio Mirante.

The absence of Jesus, Fazio and Smalling has meant that Aleksandar Kolarov has featured in the three-man central defensive unit of the 3-4-3 formation that Fonseca has recently used. Kolarov will have Ibanez and Gianluca Mancini for company at the back, with Pau Lopez being the man between the sticks.

Bruno Peres has been preferred more often than not to be the right wing-back and as per Fonseca, it is due to his attack-minded nature. Peres should start in the role ahead of Davide Zappacosta once again, with Leonardo Spinazzola expected to be deployed on the left flank.

Nicolo Zaniolo continues to be eased back into the side and he should start in midfield, and the Italian international should be partnered by Jordan Veretout. Upfront, Edin Dzeko will lead the line against Inter Milan, with Henrikh Mkhitaryan and Lorenzo Pellegrini being the two wide attacking midfielders supporting him. 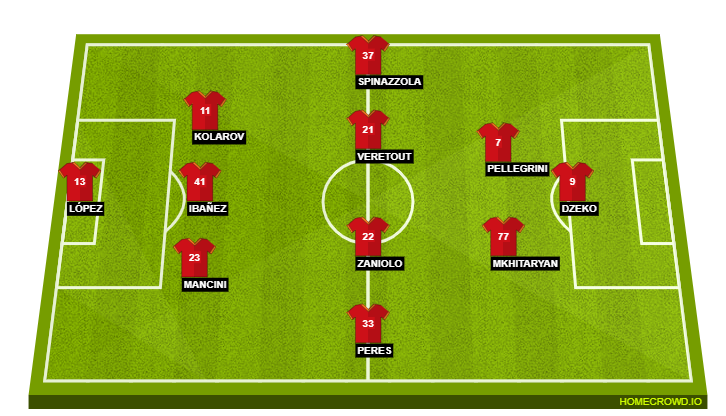 Much like his counterpart in the AS Roma dugout, Antonio Conte does not need to worry about any new roster issues. On Sunday, the Inter Milan manager will continue to be bereft of the services of three first-team players, with Matias Vecino, Nicolo Barella and Stefano Sensi still on the sidelines.

Conte will stick to his tried and tested 3-4-1-2 formation against Roma, with captain Samir Handanovic taking his place in goal. Stefan de Vrij was given a breather, while Diego Godin missed out in the last game due to suspension. The duo should return to the starting lineup on Sunday, with Milan Skriniar being their partner.

Up ahead in midfield, the continued absence of Vecino, Barella and Sensi means Marcelo Brozovic will yet again have Roberto Gagliardini for company in the double pivot. Antonio Candreva should retain his spot on the right flank, with Ashley Young expected to come in for Cristiano Biraghi at left wing-back.

Romelu Lukaku missed out once again last time out, but could be fit to start against Roma. Lukaku will pair up with Lautaro Martinez in the strike duo, with the in-form Alexis Sanchez expected to start ahead of Christian Eriksen in the no. 10 slot. 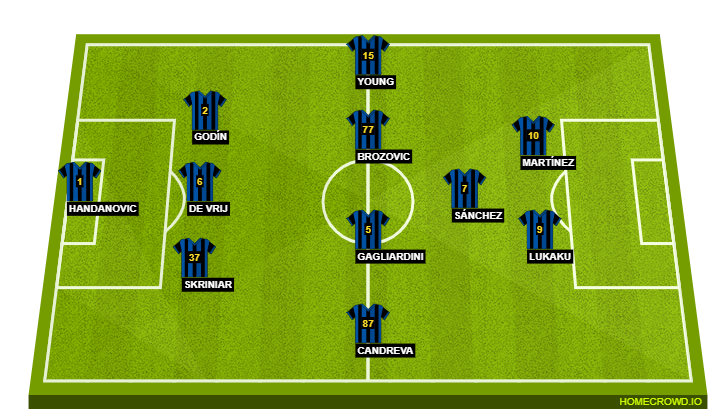 For years now, Edin Dzeko has been the goalscoring extraordinaire for AS Roma. With their top four hopes fading, it is now up to the Bosnian to deliver the goods against Inter Milan. If he manages to do so, he would not only have boosted his side’s hopes but also kill Inter Milan’s title chances in the process. A big game for the veteran striker.

After showing some poor form upon the resumption of Serie A, AS Roma seem to be back in the groove. Having said that, Inter Milan seem to be in good touch as well, as they look to run Juventus close in the title race. Considering their respective forms, a closely contested affair is being set up.

Having said that, with Alexis Sanchez playing his best football in a few years and Romelu Lukaku set to return, Inter seem to have the slightest of edges. This is a game that could go right down the wire, but the Nerazzurri should have enough to grab all three points here. The Hard Tackle, thus, predicts a 2-1 win for Antonio Conte & co.